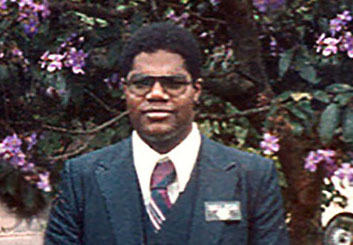 Marcus Martins was 19 years old in June 1978. He had no expectation of serving a mission because of the priesthood restriction that precluded him from doing so. But all of that changed on June 8th of that year when a friend in Utah called to tell the Martins family the amazing news that the Church had announced a revelation extending the priesthood to all worthy male members ages 12 and older, regardless of race or color. Just months later, Martins, who had been engaged to be married at the time of the revelation, entered the year-old Brazil Missionary Training Center and became the first Black missionary to serve after the announced revelation.

In the decades since, Martins has seen that there remain consequences for Church members’ many attempts to explain the priesthood restrictions that were in place prior to 1978. He discussed the topic on this week’s episode of the All In podcast.

Listen to the entire episode here or in the player below. You can also read a full transcript here.

Marcus Martins: Yes, let's review what those explanations were. One—that Black members of the Church could not have access to priesthood ordinations or temple ordinances because Cain killed Abel thousands of years ago. Or they could not hold the priesthood, or have access to temple ordinances, because in the preexistence they were fence-sitters—they were not so valiant in defending Jehovah. They were less valiant.

Those were the explanations I'm talking about. Now, the problem is that there was never a revelation on that. But they became part of the beliefs of the Church. Now you can end a ban, like the First Presidency and the Quorum of the Twelve Apostles in 1978 ended [a ban], but to end a belief, to change a belief, is more complicated. And so when I was teaching at BYU in Provo as a part-time lecturer while I was getting my PhD there in the mid 90s, I would have the few African American students coming to my office at BYU and asking me, "Brother Martins, how do I handle this thing? Because I have a professor [that] says that, “Oh, you know, poor you who were cursed.”And I said, “Well, look, you know,”—this was almost 20 years after the end of the ban. And they were still talking in terms of “You’re cursed.”

There was one student who told me that . . . when he asked his mission president [about the ban], the mission president said, “Well, God forgave the Black race, and that's why you could hold the priesthood.” And he said, “Brother Martins, what was the Black race forgiven for?" So this was mid 1990's—1994, 95, 96—almost 20 years after the ban, and these beliefs were still pervasive. And people were still passing them on, even though the priesthood ban did not exist anymore. So that's why I stated in a speech that these pseudo doctrines . . . were more harmful than the ban, because the ban ended. And then the official statement, which became Official Declaration 2 [in] the Doctrine and Covenants, speaks for itself. Well, it spoke for itself, but it didn't say, “Look,” you know, “We renounce all those things that we theorized as possible explanations for the ban.” That only came in 2013.

So it took 35 years for us to have an official statement saying, “We reject those statements from the past.” And so now, here we are, now going into eight years since the [2013] statement, which is the Race and the Priesthood essay on the Church website. And so we still have a lot of minds that need to be retrained. Look, really the scriptures say that the gospel is for everybody, in all nations, kindreds, tongues, and people, and like Nephi said, He invites all to come unto [Him], Black and White and the lighter Blacks, darker Blacks, lighter Whites, darker Whites, whatever.

Because remember, this is significant to the entire membership of The Church of Jesus Christ of Latter-day Saints, because it is not just a Black and White issue. I'm speaking now as a sociologist here, if I may. There are racial tensions, you know, between Whites and Whites. Remember, those of us who were alive in 1990s, what happened in the Balkans. The whole conflict in the old Yugoslavia, you know—Serbians against Bosnians and Croatians and so on. So for a lot of people, they will notice that, "Yeah, it's Whites and Whites." You go to some tribes in the African subcontinent. And it's this Black tribe thinking itself as higher in value than this other Black tribe and so on.

So there are all kinds of ethnic groups around the world, you name it . . . who suffer racial discrimination because of these racial theories of the past that said, “Look, if you don't conform to certain physical attributes that we consider desirable or . . . normal, we'll think less of you.” So it is a significant issue, not just because “Oh, because Blacks couldn't hold the priesthood.” No, there are lessons here for the entire membership of the Church, anywhere in the world.