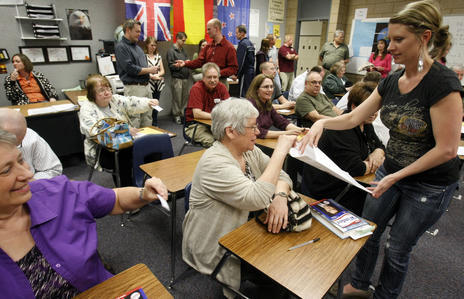 When it comes to candidates and political parties, the LDS Church remains neutral. "The Church’s mission is to preach the gospel of Jesus Christ, not to elect politicians,"Mormon Newsroom states.

However, the Church is not neutral on its stance of its members' involvement in politics and their local communities. No matter a member's country or political affiliation, the Church encourages them to "play a role as responsible citizens in their communities," become "informed about issues" and world events, and "vot[e] in elections" when they are given the opportunity.

And now, they are encouraging Mormon's in Utah to get more involved in caucus meetings.

President Thomas S. Monson and his counselors in the LDS First Presidency are counseling Utah church members to participate in the state's political caucuses on March 22.

"We are concerned that citizen participation rates in Utah are among the lowest in the nation, and we urge greater involvement by members of the church in the 2016 election cycle," the First Presidency wrote in a letter dated Feb. 17.