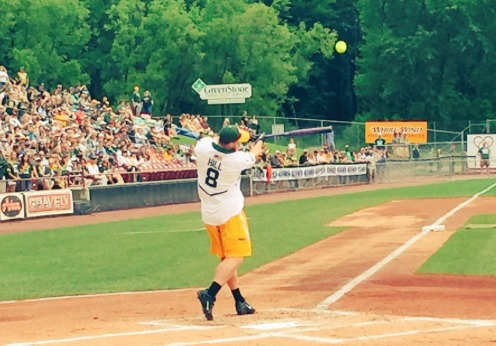 After hitting 19 home runs on Saturday, some are wondering if former BYU quarterback Taysom Hill should think about changing his career path.

The Green Bay Packers' quarterback hit the home runs at the fourth annual Jordy Nelson Charity Softball Game on Saturday with a crowd of more than 8,200 in attendance.

Unfortunately, a windshield took the brunt of Hill's incredible knack for home runs after a ball that cleared the park collided with it.

“I hope they moved all the vehicles outside the fence,” Green Bay Packers' wide receiver Jordy Nelson said, according to packers.com. “Taysom Hill broke (a windshield) in the sponsor game. I’m pretty sure Rich broke a few windows. It’s pretty amazing what these guys can do, just natural athletes, the way they swing the bat.”

First casualty of a homerun at #JordyGame. The sun is coming out. #gameonpic.twitter.com/6gyPvdkso0— Jordy Nelson (@JordyRNelson) June 3, 2017

Though it was close, the offense won the game 27-25. At the end of the game, a $130,000 check was presented to the Young Life, a charity that pairs middle school through college students with adults.

“Obviously it turned out to be a perfect day here to have fun,” Nelson said, according to packers.com. “We’ll talk about it for the next couple weeks while we’re here, and then once again next year when it’s coming back around again.”

We'll just have to see if Hill can break his charity softball game record, and maybe more windshields, next year.