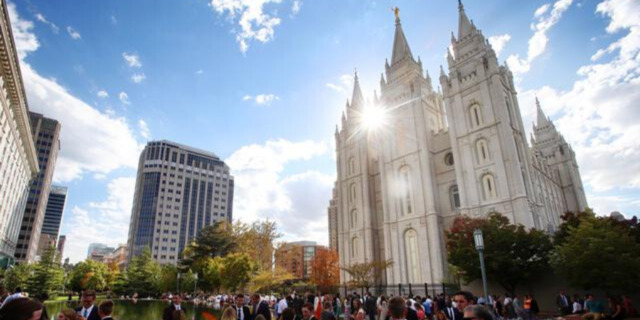 Found in the Footnotes: The Apostolic Discussion That Led to the Family Proclamation

Editor's note: Our weekly Friday column “Found in the Footnotes” explores some of the footnotes from remarks given by General Authorities and General Officers of The Church of Jesus Christ of Latter-day Saints.

“An upper room of the Salt Lake Temple.” When I hear that phrase, I feel such a power. As Elder N. Eldon Tanner said, “It is in this room that the leadership of the Church has been directed by the Lord since the temple was completed. Here one experiences a special spiritual feeling, and at times senses the presence of some of these great leaders who have gone on before. . . . It is in this body that any change in administration or policy is considered and approved, and it then becomes the official policy of the Church.”

“One day in 1994, the Quorum of the Twelve Apostles spent a day in their council room in the Salt Lake Temple discussing issues surrounding the family. They considered everything from the increasingly ubiquitous nature of pornography to potential anti-family legislation of various kinds. This was not a new discussion, but that day the entire agenda revolved around this one vital topic.

“The Twelve reviewed both doctrine and policies, considering those things that could not be changed﻿—doctrine﻿—and those things that possibly could be﻿—policies. They discussed issues they saw coming, including an intensified societal push for gay marriage and transgender rights. ‘But that was not the end of what we saw,’ Elder Nelson explained. ‘We could see the efforts of various communities to do away with all standards and limitations on sexual activity. We saw the confusion of genders. We could see it all coming.’

“This extended discussion, along with others over a period of time, led to the conclusion that the Twelve should prepare a document, perhaps even a proclamation, outlining the Church’s stand on the family to present to the First Presidency for consideration.”

“We could see it all coming.” Wow. What a powerful phrase from President Nelson. We sustain the First Presidency and the Quorum of the Twelve Apostles as prophets, seers, and revelators. A seer is “a person authorized of God to see with spiritual eyes things that God has hidden from the world,” according to Guide to the Scriptures.

When President Gordon B. Hinckley first read the proclamation to the members of the Church, he said, “With so much of sophistry that is passed off as truth, with so much of deception concerning standards and values, with so much of allurement and enticement to take on the slow stain of the world, we have felt to warn and forewarn.”

This September marks 25 years since the proclamation was first published. In many ways, the warnings have been needed and the forewarnings are needed more now than they were a quarter of a century ago. We frequently reference how it establishes that marriage is “between a man and a woman” and that “gender is an essential characteristic of individual premortal, mortal, and eternal identity and purpose.” But I sometimes forget about the other inspired truths taught in the proclamation. I sometimes wonder about what other warnings I might not be heeding. In Elder Andersen’s talk where the aforementioned footnote is found, he says, “By prayerfully pondering the proclamation through the eye of faith, we better understand how the principles are beautifully connected, supporting one another, revealing our Father’s plan for His children.”

When I look at the proclamation, I am reminded we have a divine heritage and divine potential. I see attributes that I could be better at incorporating into my home-centered learning. I feel a responsibility to strengthen the family.

So, can I invite you to take some time to act on Elder Andersen's invitation to prayerfully ponder the proclamation? You can find “The Family: A Proclamation to the World” at churchofJesusChrist.org or in the Gospel Library app under the Individuals and Families section. For me, my study was a powerful reminder of my divine truths.

As President Hinckley said after he introduced the proclamation, “We commend to all a careful, thoughtful, and prayerful reading of this proclamation. The strength of any nation is rooted within the walls of its homes. We urge our people everywhere to strengthen their families in conformity with these time-honored values.”

The footnote from Elder Andersen's talk comes from Insights from a Prophet's Life. This book offers a candid view of President Russell M. Nelson, the 17th president of The Church of Jesus Christ of Latter-day Saints, from childhood to the current day. More than a biography, this landmark volume invites readers to experience President Nelson's life through dozens of brief vignettes and hundreds of photographs. Available now at Deseret Book stores and at deseretbook.com.