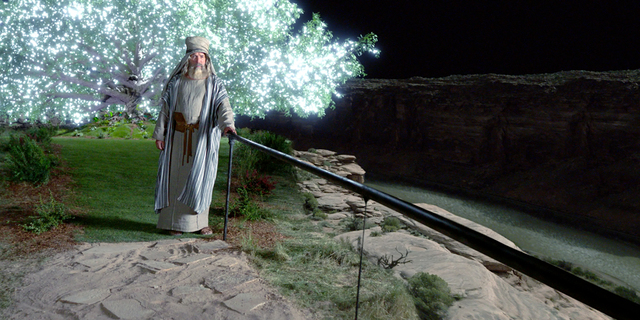 Found in the Footnotes: When 3 Apostles Past and Present Gave 3 Interpretations of the Iron Rod within 3 Months

Editor's Note: Our weekly Friday column, “Found in the Footnotes,” explores some of the footnotes from remarks given by General Authorities and general officers of The Church of Jesus Christ of Latter-day Saints.

Knowing he had an upcoming devotional at BYU in March, Elder Neil L. Andersen asked Elder David A. Bednar, who was speaking at BYU in February, if he had selected his topic.

“I was taken aback when he responded that his talk was about holding fast to the iron rod. This was the exact title I had chosen for my talk,” Elder Andersen wrote.

A week after his conversation with Elder Bednar, President Boyd K. Packer also gave a devotional at BYU and addressed the topic of the iron rod.

The incredible part? Each devotional addressed a different meaning of the iron rod.

“The connection of these three talks was no coincidence,” Elder Andersen wrote. “The hand of the Lord was at work as three talks, prepared for the same audience, identified three aspects of the iron rod, or the word of God: (1) the scriptures, or the words of ancient prophets; (2) the words of living prophets; and (3) the power of the Holy Ghost.”

This story is found in the fourth footnote of Elder Andersen’s October 2019 general conference talk, “Fruit.”

Looking at each of these talks allows us to gain a deeper understanding of the rod that marked the strait and narrow path to the tree of life.

The iron rod can represent the guiding influence of the Holy Ghost, President Packer shared in his address. He discussed the blessings that can come from heeding the promptings of the Spirit.

“If you hold to the rod, you can feel your way forward with the gift of the Holy Ghost, conferred upon you at the time you were confirmed a member of the Church,” President Packer said. “The Holy Ghost will comfort you. You will be able to feel the influence of the angels, as Nephi did, and feel your way through life.”

President Packer also discussed how this gift will help during the times when we feel like we aren’t able to find our way.

The scriptures can also help guide us to the tree of life, Elder Bednar explained. He compared the way each group progressing toward the tree of life held the iron rod, and how that can be reflected in the way we study the word of God.

“It is important to note that no mention is made about the rod of iron in these verses,” Elder Bednar said. “Those who ignore or treat lightly the word of God do not have access to that divine compass which points the way to the Savior.”

“It is significant that the second group pressed forward with faith and commitment,” Elder Bednar said. “They also had the added blessing of the rod of iron, and they were clinging to it! However, as they were confronted with persecution and adversity, they fell away into forbidden paths and were lost. Even with faith, commitment, and the word of God, this group was lost—perhaps because they only periodically read or studied or searched the scriptures. Clinging to the rod of iron suggests to me only occasional ‘bursts’ of study or irregular dipping rather than consistent, ongoing immersion in the word of God.”

Those who continually hold fast to the rod of iron (see 1 Nephi 8:30): “The third group also pressed forward with faith and conviction; however, there is no indication that they wandered off, fell into forbidden paths, or were lost. Perhaps this third group of people consistently read and studied and searched the words of Christ. Perhaps it was the constant flow of living water that saved the third group from perishing. This is the group you and I should strive to join.”

Elder Andersen, who at the time was a member of the Presidency of the Seventy, discussed the importance of the words of the living prophets.

He explained, “When the Lord called twelve disciples in the Americas after His Resurrection, He taught the people this: ‘Blessed are ye if ye shall give heed unto the words of these twelve whom I have chosen from among you to minister unto you, and to be your servants’ (3 Nephi 12:1). In our day, in a very difficult time, the Lord promised the Saints: ‘If my people will hearken unto my voice, and unto the voice of my servants whom I have appointed to lead my people, behold, verily I say unto you, they shall not be moved out of their place’ (Doctrine & Covenants 124:45).”

Elder Andersen detailed the blessings that come from heeding the words of the prophets.

“We are not forced to obey; there is no compulsion,” he said. “But if we will be attentive to their words, if we will be responsive and willing to change our behavior as the Holy Ghost confirms their counsel, we will not be moved out of our place—meaning we will hold fast to the iron rod and will forever remain safely on the path leading to the tree of life.”

The Importance of the Three Meanings

What I love about the beauty of the three meetings is how they support and strengthen each other: the words of the ancient prophets, the words of the living prophets and the guidance of the Holy Ghost. Elder Andersen said it best, “The word of God contains three very strong elements that intertwine and sustain one another to form an immovable rod.”

The Lord inspiring three of his servants to speak on the same subject within three months not only helps add deeper meaning, but it also shows the importance of the word of God.

As Elder Andersen said, “My brothers and sisters, this is a subject the Lord wants you to think about.”