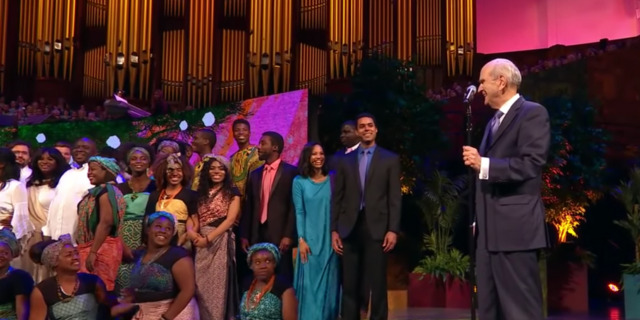 Found in the footnotes: 'Words would diminish the power' of the revelation on the priesthood

I frequently reflect on a quote by Elder David A. Bednar from a February broadcast, “The longer I serve, the less satisfied I am with words.”

Isn’t it interesting that the language of the Spirit—the universal language understood by every child of God—sometimes cannot be captured in mortal words? As Elder Joseph B. Wirthlin has said, “What the Spirit communicates to the hearts of men is beyond the power of words to portray!”

One instance where words fall short happened on June 1, 1978, in an upper room of the Salt Lake Temple. On this day, President Spencer W. Kimball and the Council of the First Presidency and the Quorum of the Twelve Apostles received the revelation that would extend priesthood and temple blessings to all worthy male members of the Church.

In his April 2020 general conference talk, Elder Quentin L. Cook shared, “I have served with many of the Twelve who were present and participated when that precious revelation was received. Each of them, in personal conversations, confirmed the powerful and uniting spiritual guidance President Kimball and they had experienced. Many said it was the most powerful revelation they had received before or after that time.”

In a footnote of his talk, Elder Cook elaborates on the power of that revelation, “Many of the Apostles indicated that the revelation was so powerful and so sacred that any words used to describe it would be insufficient and, in some ways, would diminish the deep and powerful nature of the revelation.”

Not only could words not describe this revelation—words would diminish the power of the revelation.

Monday, June 8, marks the 42nd anniversary of the day the First Presidency sent a letter to members of the Church notifying all “that the long-promised day has come when every faithful, worthy man in the Church may receive the holy priesthood, with power to exercise its divine authority, and enjoy with his loved ones every blessing that flows therefrom, including the blessings of the temple.” This revelation is now canonized as Official Declaration 2.

► You may also like: Isaac Thomas on the moment he heard of the priesthood revelation 40 years ago

In another footnote, Elder Cook writes “the revelation implemented doctrine set forth in the Book of Mormon that ‘all are alike unto God,’ including ‘black and white, bond and free, male and female’ (2 Nephi 26:33).”

In a statement earlier this week, President Russell M. Nelson wrote, “During the Savior’s earthly mission, He constantly ministered to those who were excluded, marginalized, judged, overlooked, abused, and discounted. As His followers, can we do anything less? The answer is no! We believe in freedom, kindness, and fairness for all of God’s children! . . . It behooves each of us to do whatever we can in our spheres of influence to preserve the dignity and respect every son and daughter of God deserves. . . . We need to work tirelessly to build bridges of understanding rather than creating walls of segregation.”

There is power in the words President Nelson used. He helps us understand that this might not be an easy task. It doesn't only take work—it takes tireless work. It isn't only about finding bridges; it's about building them.

In an article for LDS Living, Sheryl Ellsworth and Emily McCormick wrote, “To discuss race without fear, it’s helpful to learn the role race played in the history of our country and how we got to where we are today.”

► You may also like: 5 things 2 Latter-day Saint moms with children of color want you to know

I believe that in order for us to build bridges of understanding, we also need to learn the role race played in the history of our Church. An excellent place to start is the Gospel Topics Essay, "Race and the Priesthood," which was met with gratitude from black Latter-day Saints when it was released in 2013.

I would also recommend watching the 2018 "Be One" Celebration, which commemorated the 40th anniversary of the revelation on the priesthood. Though I’ve had the opportunity to attend several events in the Conference Center, including general conference and Christmas concerts by The Tabernacle Choir at Temple Square, the time I felt the Spirit the strongest in that 21,000-seat building was during the “Be One” Celebration. For me, this is one of the experiences of my life that I can’t find words to adequately express the Spirit I felt. I have re-watched the celebration multiple times to feel the incredible power of the stories, messages, and music presented that evening.

Perhaps you can enjoy doing the same with the video below as you learn about the faithful heritage of black Latter-day Saints.

► You may also like: Church shares compelling video: “I say unto you, be one”