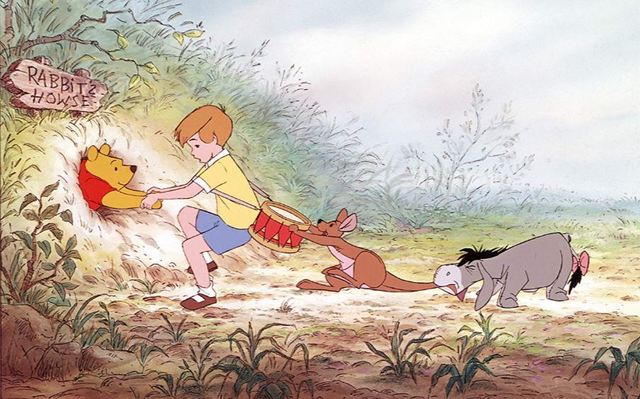 On October 14, 1926, Winnie the Pooh was first published, sparking a world-wide love of this silly old bear that became a childhood icon. In honor of this literary classic that has been inspiring children and adults for nearly a century, here are some touching Winnie-the-Pooh moments that carry profound gospel lessons.

Take the Time to Minister and Sit with Others

Thanks to Mormon Life Hacker for making us aware of this touching Winnie-the-Pooh passage.

It occurred to Pooh and Piglet that they hadn’t heard from Eeyore for several days, so they put on their hats and coats and trotted across the Hundred Acre Wood to Eeyore’s house. Inside the house was Eeyore.

“We just thought we’d check on you," said Piglet, "because we hadn’t heard from you, and so we wanted to know if you were okay."

Pooh looked and Piglet, and Piglet looked at Pooh, and they both sat down, one on either side of Eeyore in his stick house.

Eeyore looked at them in surprise. "What are you doing?"

“We’re sitting here with you," said Pooh, "because we are your friends. And true friends don’t care if someone is feeling sad, or alone, or not much fun to be around at all. True friends are there for you anyway. And so here we are."

“Oh," said Eeyore. "Oh." And the three of them sat there in silence, and while Pooh and Piglet said nothing at all; somehow, almost imperceptibly, Eeyore started to feel a very tiny little bit better.

Because Pooh and Piglet were there.

No more; no less.

“I don’t feel very much like Pooh today," said Pooh.

"There there," said Piglet. "I’ll bring you tea and honey until you do.”

Live in the Moment and Enjoy the Simple Things

"When you wake up in the morning, Pooh," said Piglet at last, "what's the first thing you say to yourself?"

"What's for breakfast?" said Pooh. "What do you say, Piglet?"

Pooh nodded thoughtfully. "It's the same thing," he said.

“I was just sitting here enjoying the company. Plants got a lot to say if you take the time to listen.”

Reach Out to Others and Smile

“You can’t always sit in your corner of the forest and wait for people to come to you. You have to go to them sometimes.”

“Always wear a smile, because your smile is a reason for many others to smile!”

The People in Our Life Are What Matter

“How lucky I am having something that makes saying goodbye so hard.”

Be Patient and Look on the Bright Side

“If the person you are talking to doesn’t appear to be listening, be patient. It may simply be that he has a small piece of fluff in his ear.”

“Rivers know this: there is no hurry. We shall get there some day.”

“It’s snowing still,” said Eeyore gloomily.
“So it is.”
“And freezing.”
“Is it?”
“Yes,” said Eeyore. “However,” he said, brightening up a little, “we haven’t had an earthquake lately.”

"There's the South Pole," said Christopher Robin, "and I expect there's an East Pole and a West Pole, though people don't like talking about them."

“How would it be,” said Pooh slowly, “if, as soon as we’re out of sight of this Pit, we try to find it again?”

“What’s the good of that?” said Rabbit.

“Well,” said Pooh, “we keep looking for Home and not finding it, so I thought that if we looked for this Pit, we’d be sure not to find it, which would be a Good Thing, because then we might find something that we weren’t looking for, which might be just what we were looking for, really.”

“I don’t see much sense in that,” said Rabbit.

“No,” said Pooh humbly, “there isn’t. But there was going to be when I began it. It’s just that something happened to it on the way.”

Take Time to Be with People You Love

Piglet sidled up to Pooh from behind. “Pooh,” he whispered.

“Nothing,” said Piglet, taking Pooh’s paw, “I just wanted to be sure of you.”

“I think we dream so we don’t have to be apart for so long. If we’re in each other’s dreams, we can be together all the time.”

Life Is a Journey and an Adventure

"Life is a journey to be experienced, not a problem to be solved."

It's the Small Things in Life That Count

"Sometimes," said Pooh, "the smallest things take up the most room in your heart."

“A little consideration, a little thought for others, makes all the difference.”

“Piglet noticed that even though he had a very small heart, it could hold a rather large amount of gratitude.”

“Weeds are flowers too, once you get to know them.”

Love Brings Happiness to Ourselves and Others

Piglet: “How do you spell love?”

"Love is taking a few steps backwards, maybe even more, to give way to the happiness of the person you love."