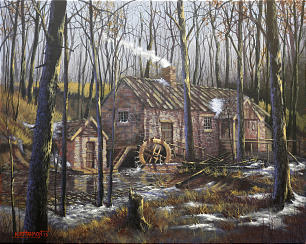 On the 175th anniversary of the Haun's Mill Massacre, a professor of Church history and doctrine at BYU gave a lecture presenting "new insights and interpretations" pertaining to what is widely regarded as among the most tragic incidents in the history of the persecutions suffered by the Latter-day Saints.

Alexander L. Baugh, whose area of expertise is the northern Missouri period of Church history, presented the hour-long lecture Oct. 30 at This Is the Place Heritage Park in Salt Lake City. He gave insights from his research regarding such matters as the identity of Jacob Haun, the main reason for the attack on the Haun's Mill settlement and whether the Mormons at Haun's Mill intentionally disobeyed Joseph Smith's counsel to move in closer to the Far West settlement for protection, which would have prevented the attack.