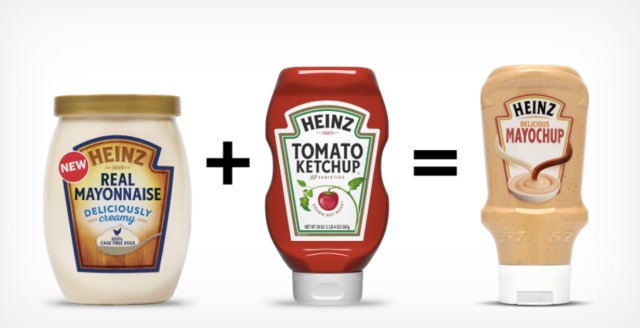 Thanks to Fox 13 News for making us aware of this crucial fry sauce fiasco.

Okay, Heinz may think they've invented "Mayochup" (a.k.a. fry sauce) in 2018, but let's be clear: Utahns and Idahoans have had this condiment down for decades.

In fact, it was a Mormon who invented this delicious condiment. Here's a little background on this cultural phenomenon from our 2012 spring LDS Living magazine:

In 1924, Don Carlos Edwards set up a small food stand at a Pioneer Day celebration in Utah. Over the next few years, he carted his stand from carnival to carnival, and when his food became more popular, Edwards set up a small business he called Don Carlos Bar-B-Q. Eventually, the restaurant became what we know today as Arctic Circle. Edwards enjoyed experimenting with food, and some of his achievements include the Ranch Burger, a burger with ranch seasoning, and the Brown Topper, a chocolate-dipped ice cream cone. But his most-loved invention is fry sauce. Edwards began experimenting with potential burger sauces sometime in 1940 and created what he called “pink sauce.” The sauce consisted of mayonnaise, ketchup, and dill pickle juice, though Arctic Circle has since added other secret ingredients. Although it was originally intended for burgers, Edwards must have dipped a fry in the sauce at some point over the next three years, and the rest, as they say, is history.

Clearly, both Utahns and Idahoans hold proudly to this condiment, and visitors who encounter fry sauce are usually astounded by its deliciousness. Like comedian Jim Gaffigan, who told the Deseret News during his 2016 visit to Utah, "When I perform in Salt Lake, even outside the fry sauce, there’s a communication there that is very much a conversation."

► You'll also like: What the "King of Clean" Comedian Jim Gaffigan Has to Say About Mormons, Utah, and Fry Sauce

So, understandably, there has been some conversation surrounding "Mayochup" and fry sauce as of late. Here are just a few hilarious responses from Twitter.

I think the #utleg should go into special session to pass a resolution demanding @HeinzKetchup_US recognize Utah's sovereign authority on fry sauce. I'm pretty sure the entire @utahsenate and @UtahReps would go for it.

This is wrong. This is an attack on my culture. It might be stupid, I might not even like fry sauce, but I will die on the fry sauce hill. #lds#frysaucepic.twitter.com/TvGAJluuoC — Fire Wenger (@Fathead826) April 11, 2018

One of my coworkers just tagged me in a new “Mayo& Ketchup” sauce, I can’t believe there are people all over the world who don’t know about fry sauce 😂🤦🏼‍♀️ — megan (@meganfullmer191) April 10, 2018

This week in "food that apparently no one outside this region eats" https://t.co/WhvxMDEhBW

Can all my Idahoans cringe with me? It’s fry sauce. #unculturedswineshttps://t.co/bB9b1MmykW — Karlee Bonander (@KarleeBonander) April 11, 2018

I am a fierce advocate for combining ketchup and mayo. It's delicious. However, calling it 'Mayochup" is a horrible idea. How about we just call it fry sauce, like every native Utahn does? https://t.co/4qAizbuvKv — Lincoln Graves (@LincolnGraves) April 12, 2018

THEY DID NOT INVENT IT, UTAH HAS BEEN EATING FRY SAUCE FOR YEARS, EDUCATE YOURSELVES pic.twitter.com/JPF578sqQO — Hunter Schwarz (@hunterschwarz) April 12, 2018

How we feel about #mayochup. Gimme some fry sauce.
.@HeinzKetchup_USpic.twitter.com/Bt0gz03N40

this is called FRY SAUCE you thieves.

I would rather go door to door through every town in America spreading the good word of fry sauce rather than accept “mayochup” as a legitimate name of anything. — Camille (@HarmerCam) April 12, 2018