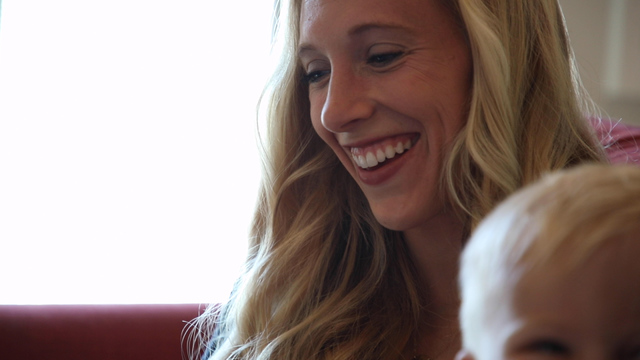 Author's note: This article was originally published by the Deseret News in January 2015. It has been updated and republished here with permission.

In March 2012, Brittany Fisher, then a student and cross-country runner at Utah State University, fell approximately 50 feet while rappelling and was paralyzed from the waist down. Today, she is a wife and mother whose inspiring perspective on life is born not only of her characteristic optimism but also her newfound appreciation for grief.

She has learned that grief is not a sign of weakness but rather an indicator of strength.

“I don’t care who you are, you have some kind of loss in your life, and it makes you feel weak when you feel that sadness,” Fisher said. “But I’ve learned that feeling that sadness doesn’t mean that I was weak. It just means I was dealing with it and facing it. If anything, I was being more brave for facing that grief, that sadness or that depression. . . . Being brave is being vulnerable and being open and facing those hard things.”

This has not always been Fisher’s outlook on life. In the first year following her accident, she shunned the instinct to grieve and pushed herself toward walking, driving, and completing her college education.

While she acknowledges that recovery from spinal cord injuries varies from patient to patient, Fisher regained enough mobility in her feet and legs to walk with braces, and she became a role model for others at the physical therapy clinic. In the beginning of the second year, she was asked to speak at girls camps, and she improved her physical strength by hand-cycling and swimming. It wasn’t until September 2013 that the grief and sadness surfaced and left her feeling depressed.

“Honestly, [that] year has been the roughest since my accident,” Fisher said. “It is when I went through the depression and the grief. I just finally allowed myself to feel that sadness to the whole extent. . . . It was also a time where I realized what a traumatic loss that I had gone through.” 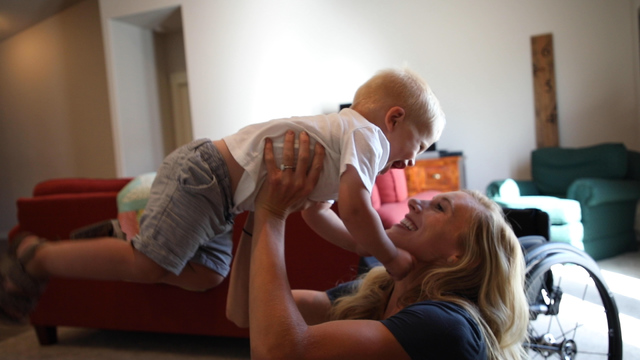 She began to decline speaking engagements. She pulled herself out of the spotlight, which she had never sought, and began for the first time to grieve the loss of her mobility, specifically her inability to run, and the changes that brought into her life.

“I had been in the spotlight for so long, and I didn’t want to be in the spotlight, but I kept a positive face and a good look,” Fisher said. “I went to Louisville and walked a mile, and at graduation they acknowledged me, and I got a standing ovation. And all these good things with me in the limelight happened, and then I went home, and I wasn’t in the spotlight anymore. I just had time to grieve and feel those things that needed to be felt and I needed to go through.”

As she allowed herself to feel the pain, she realized that it had always been present, but she had stifled it until it was undeniable. She felt embarrassed at times over how sad or upset she was, but as she let the grief run its course, she found that it was necessary because she had lost a significant part of her life the night she fell from that cliff. Running had always been her release, her go-to, and it was gone. 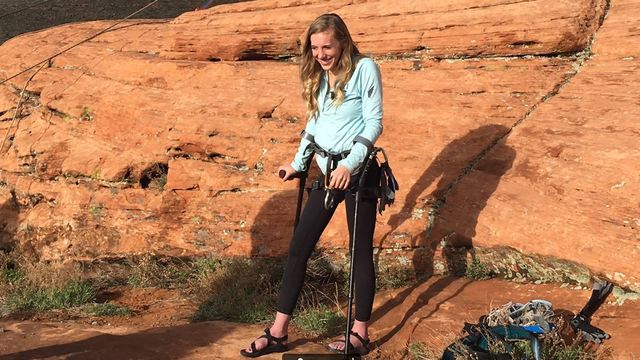 “I just really genuinely loved it,” Fisher said of running. “Just like how people love other things in their lives. . . . With all of those things, there is some kind of loss. For me, there was no death, there was no funeral that was held at all, but for me, I had to mourn the loss of my legs and running . . . like that quote (by author John Green), ‘Pain demands to be felt.’ I just thought if I kept burying it and burying it, I would never have to deal with it, if I just kept pushing it down, but it found a way to surface.”

While she admits that seeing people run, something she will never be able to do, still makes her feel a certain sadness, she has found that healing sometimes comes in unexpected ways.

“I’ve been given blessings of healing, and I’ve learned that healing doesn’t necessarily mean I’m going to stand up and walk and run. While there has been a lot of that — I am standing up and walking some — but I’ve been healed by being given the strength and understanding or patience.”

The healing has come through things like prayer, scripture study, and the understanding of the Atonement she has gained as a lifelong member of The Church of Jesus Christ of Latter-day Saints. 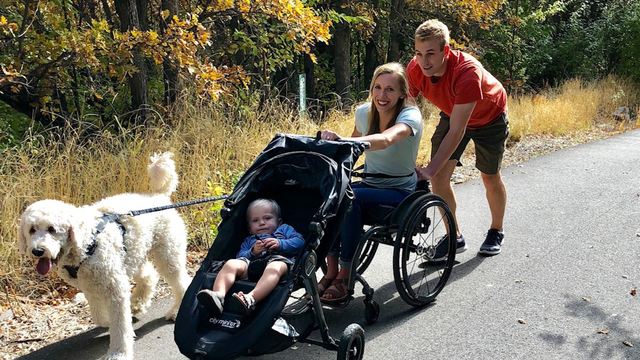 “For me, the biggest thing that I’ve relied on is the Atonement and how it sometimes makes no sense to me but that healing power is found in the Atonement,” Fisher said. “And the biggest thing I’ve learned is its ability to heal physically, emotionally, and mentally. The strengthening and enabling power, that it’s not just forgiveness for our sins but it's actual strength, strength for me to actually stand some days and walk but then also strength to overcome those emotional trials.”

She has also found strength in learning from the experiences of others. She recently read airplane crash survivor and blogger Stephanie Nielson’s book, Heaven Is Here, and found that while their experiences were different, the emotions they felt in the wake of their accidents were similar. It was while reading Nielson’s book that Fisher felt a desire to write again, something she had not done much of since her accident. She has shared her experience and her feelings on her blog.

“I think when people are open about their grieving or their depression or just vulnerability in general, it helps open up other people,” Fisher said. “One person opening up and being vulnerable about those feelings and experiences helps others open up, and that’s what it did for me. It wasn’t face-to-face, but it was in a book. . . . I hope that what Stephanie Nielson’s book did for me, I can do for other people.”