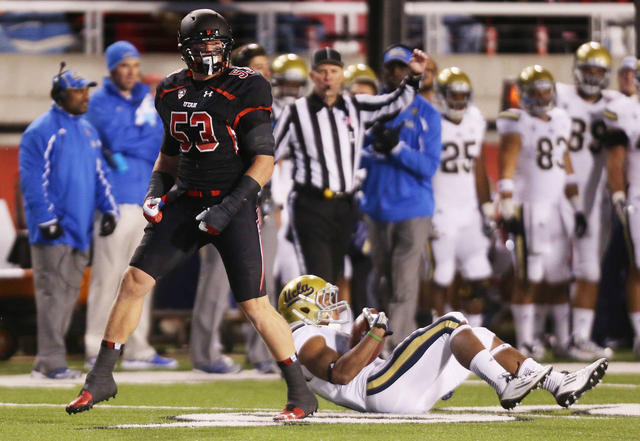 "Am I going to regret this?" Jason Whittingham remembers thinking as he approached the Assistant General Manager of the Minnesota Vikings.

After preparing his whole life to play in the NFL, battling injuries and working his way up from undrafted to signed as a linebacker, Jason was faced with a heart-wrenching decision: Stay with the Vikings or follow the prompting to leave.

Ever since Jason Whittingham was 6 years old, he knew he wanted to play in the NFL—and it wasn't a goal he took lightly.

Since he was 8, Jason played football. Throughout his childhood, he practiced with his father, Cary Whittingham, a former linebacker for the Cincinnati Bengals, as well as his uncle Kyle Whittingham, the head football coach of the University of Utah.

"They were my heroes and I wanted to be like them," Jason says, remembering what inspired him to play football.

While attending Timpview High School in Provo, Utah, Jason made it on the varsity football team, won two state championships, and received an award from the National Football Foundation and College Hall of Fame Utah Chapter for his skills as a football player and for service he gave to his community while earning his Eagle Scout.

And all of Jason's hard work in high school paid off. By the time he graduated, Jason had a full-ride football scholarship to the University of Utah.

But he was willing to put that scholarship and his football dreams on hold for two years while he served a mission for The Church of Jesus Christ of Latter-day Saints.

The first week of August often serves as an unwelcome reminder that school is about to start in a few weeks. For Jason and his twin, Trevor Whittingham, it was a reminder that they only had 10 days before they had to leave for the MTC.

Though still 18, the twins were able to send in their missionary applications early in order to be back from their missions in time for school. (At that time, the missionary age was still 19.) Sending in their availability for late summer, the twins opened up their calls to find they only had 10 days to prepare to leave for the MTC.

Though the twins were to serve in different states, Jason was to serve in South Carolina and Trever in Ohio, they both received an unexpected surprise when they arrived at the MTC.

"We got there late, like most guys do, and they kind of just said, 'Oh your companions have already been assigned to someone else so we'll just put you two together,'" Jason says. "It was a big blessing because it's always hard for a kid to go into the MTC, but when your twin brother is your only sibling and your best friend, I knew it was going to be hard to be separated from him."

And having a twin as a companion turned out to be even more of a blessing in another way.

While in the MTC, Jason found out he suffered from Obsessive-Compulsive Disorder, or OCD. He says having his twin as a companion helped greatly as Trevor would talk him through his anxiety.

But about eight months into his mission, Jason was sent home.

And that's what Jason says motivated him to work hard to return to his mission. After seven months of working through his anxiety and OCD, Jason was able to return to the missionary field to complete his mission.

But completing his mission wasn't the end of his challenges.

Once Whittingham came back from his mission, he started up his football training. Though not able to pick up right where he left off, Jason said he knew Heavenly Father was helping him get back into shape.

"It's kind of like when you're learning a language," Jason says. "You can learn a language in two months that you wouldn't have been able to learn in two years if you had just done it by yourself without Heavenly Father's help. I think I was able to get back in shape pretty fast with Heavenly Father's help as opposed to just trying to do it myself."

And while playing football and attending school, Jason met his wife, Kim. Seeing her for the first time in church when she was turning in her tithing slip, Jason says he instantly knew there was something different about her.

"I remember running out where the overflow was to catch up to her before she left," Jason says. "And I asked her out on a date and luckily she said yes."

From there, the two continued to date until they were married in June 2014.

Then, in his junior year, Jason suffered a dislocated left wrist only two games into the season. The injury took him out of eight games and resulted in two surgeries.

"It was the most traumatic thing to happen to me," he says. "It was so painful... But I learned a lot from it."

Jason says he relied on the lessons he learned on his mission and trusted in Heavenly Father. He says instead of asking why, he trusted that Heavenly Father would help him recover as Jason worked to get better.

Though doctors told Jason he would have arthritis in his wrist as a result of the injury, he was able to return to playing football his senior year.

After graduating from college in exercise and sports science in December 2015, Jason attended mini-camps in the spring for the Minnesota Vikings and the Oakland Raiders, but it looked like neither team had a spot for him.

Then he got a call—the Vikings wanted him to train at the fall training camp.

"When I got that call, I got really excited and I thought, 'This is the chance to do what I've always wanted to do,'" Jason says.

And after a workout with the team, Jason signed a rookie contract to be a linebacker for the Vikings.

Though it was difficult to be away from his wife, who was pregnant at the time, Jason continued to work hard to stay on the team.

But on Sunday, something didn't feel right.

"I just didn't feel comfortable being at my job on Sunday," he says. "So I prayed about it and I said, 'Heavenly Father, help me to have the strength to do the right thing because I don't want to do something that's not right.'"

Making the tough decision to give up his childhood dream of playing in the NFL, Jason approached the general assistant manager for the Vikings and told him he wouldn't be playing on the team.

After a discussing the reasons behind Jason's choice, the assistant general manager respected his decision to leave the team.

"I felt a burden lifted off my shoulders and I knew that I had made the right decision for me," Jason says.

Jason says his family, especially his wife, was very supportive of his decision to leave the NFL.

And though he misses being a football player, he hasn't left the sport behind.

He says he also wants to be able to help train kids for college football and says he's currently working with a player who wants to attend the University of Utah in the spring.

But on his choice of giving up playing in the NFL to worship on Sundays, Jason says he has no doubt he made the right decision for him.

"I've felt peace about it ever since so I know I made the right choice," he says. "I know if I continue to work hard, Heavenly Father will help me in whatever I do."

For more on LDS football players who stood up for their beliefs, check outQB: My Life Behind the Spiral.