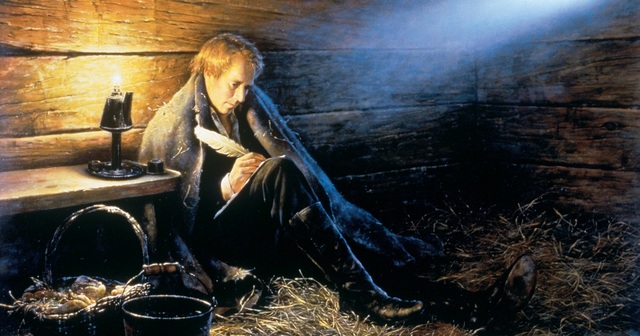 A new year, a new page in the book of our lives; and the first steps we take, the first things we see or choose to do, can have special meaning for us, both in the moment and in the days ahead.

Simple New Year’s Day patterns can hold a sweetness. For years, my husband and I would take a long walk where there were trees and quiet, and the clear call of blackbirds in the thin winter air. One Jan. 1 we spent on the beaches after singing "Should auld acquaintance be forgot" at midnight with a group of bright-faced students from all parts of the world.

When my younger girls were teenagers, we held another custom, of going together to our favorite bookstore and selecting a special book — crisp, unread, unknown yet — until we opened the pages to discover the wonders within.

Let us look for a moment into the lives of some we know and admire, and share in thought the challenges and experiences that marked the beginning of a new year for them.

What of the Prophet Joseph Smith? On Jan. 2, 1831, he received what is Section 38 of the Doctrine and Covenants wherein the Lord told the Saints: “… ye should go to the Ohio; and there I will give unto you my law; and there you shall be endowed with power from on high; And from hence, whosoever I will shall go forth among all nations, and it shall be told them what they shall do; for I have a great work laid up in store, for Israel shall be saved, and I will lead them whithersoever I will, and no power shall stay my hand” (Doctrine and Covenant 38:32-33).

Yet, on Jan. 1, 1839, eight years later, Joseph recorded in his journal from the confines of his six-months’ cell in Liberty Jail: “The day dawned upon us as prisoners of hope, but not as sons of liberty. O Columbia, Columbia! How thou art fallen! ‘The land of the free, the home of the brave! The asylum of the oppressed’ — oppressing thy noblest sons, in a loathsome dungeon, without any provocation, only that they have claimed to worship the God of their fathers according to His own word, and the dictates of their own consciences” (History of the Church 3:245).

Thus, the prophet of the Lord, tried and seasoned in the refiner’s fire, began a year that ended with sweet reunion with his family and the church, and the gathering of the members of The Church of Jesus Christ of Latter-day Saints in Nauvoo, Illinois. And on Jan. 2, 1840, at a conference of the church in Philadelphia, Joseph spoke to the Saints, bearing testimony of the Book of Mormon (“The Words of Joseph Smith,” BYU Religious Studies Center, published in 1980, p. 31).

On Jan. 1, 1846, Brigham Young performed the first marriage sealing for “time and all eternity” in a temple in this last dispensation (”On This Day In the Church,” Eagle Gate, published in 2000, p. 1). (Sealings had been performed by Joseph Smith starting in 1843 outside of the temple during its construction, according to information from the Church History Department.)

Indeed, during the final months of Nauvoo, the temple very largely became Brigham’s life. He recorded: “Such has been the anxiety of the Saints to receive the ordinances, and such the anxiety on our part to administer to them, that I have given myself up entirely to the work of the Lord in the Temple night and day, not taking more than four hours sleep, upon an average, per day, and going home but once a week” ("Journal of Brigham," pp. 123-24).

Parley P. Pratt, one of the most powerful missionaries in the early church, records that on Jan. 1, 1856, he wrote a letter to the New York Herald, and in the evening attended a dance in the Legislative Hall in Salt Lake. He also recorded the words to a new hymn titled “The Standard of Zion.”

George Q. Cannon, another mighty leader in pioneer times, was serving in Hawaii on Jan. 1, 1851, and on Jan. 3 he records: “Eleven years to-day was the day that I saw the first Mormon. (Uncle) John Taylor. Time is rolling on, it seems as though it was only a few days ago since I was a child listening … to what the Elders had to say, drinking it in greedily … then I used to wish that I was a man grown and had the Priesthood that I might have the privilege of preaching the gospel … my highest ambition …" (see "The Journal of George Q. Cannon" on churchhistorianspress.org).

At the beginning of January 1845, Zina Huntington Young recorded: “Zebulun is 3 years old to-day and in good health for which I feel truly Grateful. Also Jacobs and wife were here on a visit. H(enry) commenced his house.” This was from Nauvoo, or now the City of Joseph, since the death of Joseph and Hyrum in June of 1844.

Leonora Cannon Taylor wrote to her husband, John Taylor, who was on a mission, a letter dated Jan. 2, 1840, from Montrose, Iowa, — where the Saints had also gathered on the Iowa side of the Mississippi River, across from Nauvoo.

“I wish my John a Happy New Year and many of them. I spent new Years day in Brother Rosers with some Friends in the Evining I had three Indian Women a papuce and an Elderly Man all very clean supper with me the(y) sat around the Fire and talked away quite comfortable little Joseph kisst the little papuce and was delighted with it the Children all send there love and a hundred kisses to Father” (“In Their Own Words,” by Carol Cornwall Madsen, Deseret Book, published in 1994, pages 103-104).

Times alter and change. People come and live out their days and pass on, and the years are given us, one at a time, as gifts to delight in — and to use for joy and blessings as we pass through our lives.

Susan Evan McCloud is a freelance writer, a student of Latter-day Saint and Utah history, Scottish history and literature, and has a son who plays the bagpipes and a daughter studying Gaelic in Glasgow, Scotland.