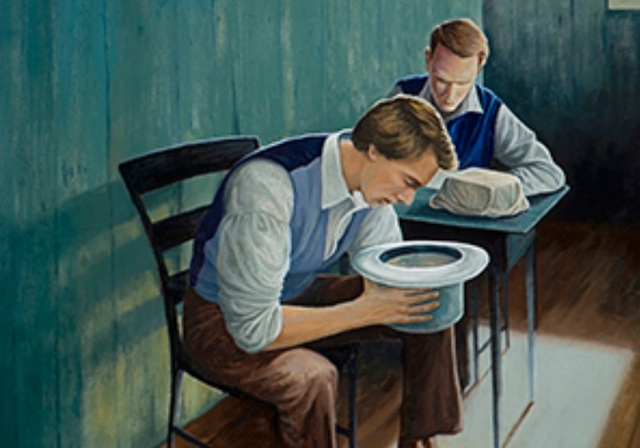 The youthful prophet received many visions through the medium of “Urim and Thummim”—sometimes a seer stone and, more particularly, the Nephite interpreters. Both of these instruments apparently operated in much the same spiritual manner, and through them Joseph received an undetermined number of visions in addition to the translation of the Book of Mormon. The young prophet obtained a seer stone, described as dark brown in color, while digging a well for Willard Chase around 1822.1

This discovery occurred only two years after the First Vision and one year before Moroni’s first visits. Joseph made use of the seer stone for five years before obtaining the Nephite interpreters 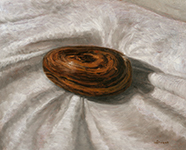 from Moroni in 1827. Latter-day Saints should not be surprised to learn that prior to being engaged specifically in the work of the Lord—that is, prior to beginning the work of the translation of the plates—the youthful Joseph apparently recognized that God had given him visionary powers enabling him to see supernatural visions in a wide variety of areas. Between 1822 and 1827, he successfully obtained an unspecified number of visions by means of the seer stone. He even gained a reputation for such activities, which may explain why men such as Josiah Stowell, who lived more than one hundred miles away, near South Bainbridge, New York, sought out Joseph Smith and employed him to locate buried treasure in fall 1825.2

Several examples of Joseph’s ability to receive visions by means of a seer stone illustrate the power associated with the Prophet and this instrument.

Joseph’s use of the stone may have also encouraged him to propose marriage to Emma Hale. At Joseph’s annual visit to the Hill Cumorah in September 1826, Moroni told him that he could have the plates the following year if, in Joseph Knight’s words, “he Brot with him the right person.” Knight recounted this conversation further:

Joseph says “who is the right Person?” The answer was you will know. Then he looked in his glass and found it was Emma Hale, Daughter of old Mr Hail of Pensylvany, a girl that he had seen Before, for he had Bin Down there Before with me. . . . He came to me perhaps in November and worked for me until about the time that he was Married . . . and I furnished him with a horse and Cutter to go and see his girl Down to Mr. Hails. And soon after this he was Married and Mr Stowel moved him and his wife to his fathers in Palmyra Ontario County.3

Seeing Events Through the Interpreters

David Whitmer learned during his very first meeting with Joseph that, by means of the seer stone, Joseph was able to see in detail actions many miles away. In late May 1828, at the request of Oliver Cowdery and Joseph, David traveled from Fayette, New York, over one hundred miles to Harmony, Pennsylvania, to take the two men back to his father’s farmhouse so they could complete the translation. As he neared Harmony, he was surprised to meet Joseph and Oliver, who “were coming toward me, and met me some little distance from the house.” David reported further:

Oliver told me that Joseph had told him when I started from home, where I had stopped the first night, how I read the sign at the tavern, where I stopped the next night and that I would be there that day before dinner, and this was why they had come out to meet me, all of which was exactly as Joseph had told Oliver, at which I was greatly astonished.4

Moroni gave Joseph possession of the plates, breastplate, and interpreters on September 22, 1827. When Joseph Smith first put on the spectacles, “his entire past history [was] revealed to him,” David Whitmer recounted. This experience, David believed, helped Joseph recognize the greater supernatural power God had now given him.5

Joseph Knight Sr., who was at the Smith home in Palmyra when Joseph returned from the Hill Cumorah, remembered conversing with Joseph about the sacred relics the morning after he gained possession of them. “It is ten times Better than I expected,” he remembered Joseph saying. He recalled further the Prophet’s particular fascination with the spectacles. “He seamed to think more of the glasses or the urim and thummem then [than] he Did of the Plates,” wrote Knight, “for, says he, ‘I can see any thing; they are Marvelus.’”6 Indeed they were, for as the Prophet’s mother, Lucy Mack Smith, recalled, by means of the instrument “the angel showed him those things which he saw in vision.”7

Learn more about divine manifestations during the Restoration from Opening the Heavens: Accounts of Divine Manifestations, 1820-1844.

This volume brings together, for the first time, all of the known documents from Joseph Smith's lifetime relating directly to key events of the Restoration that were accompanied by divine manifestations. These first-hand accounts uniquely convey the spirit of these important occasions and provide precious details that help modern readers construct a vivid image of what transpired.

Working as a Protection

These tools were not used for trivial or spectacular sensations. One major purpose of the spectacles (and perhaps also the seer stone) was to help protect the plates and Joseph’s life. Lucy said her son “always kept the Urim and Thummim about his person” so “he could also ascertain, at any time, the approach of danger, either to himself or the Record.”8 Lucy Mack Smith and Martin Harris mention three incidents where the plates were kept safe because of information received by means of the Urim and Thummim.9

Soon after acquiring the ancient relics, Joseph wondered how he could proceed without some personal assistance, particularly financial aid, so that he could devote himself entirely to the work of 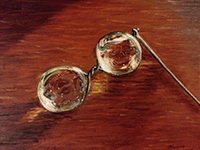 translation. The answer came in a vision through the holy interpreters. During one of his interviews with the angel Moroni, probably in September 1827, Joseph asked who could assist him. He was told “to go and look in the spectacles, and he would show him the man that would assist him.” The man he saw was Martin Harris. A short while later, the Prophet told Harris what had been made known to him. The Palmyra farmer later recalled how the message “struck me with surprise. I told him I wished him to be careful about these things. ‘Well,’ said [Joseph], ‘I saw you standing before me as plainly as I do now.’”10 Martin subsequently received a testimony of Joseph Smith’s divine calling to translate the Book of Mormon and later gave liberally of his wealth to the work.

Joseph Smith never detailed the method or procedure of translation.11 However, Martin Harris, who assisted with the translation of the first 116 pages in 1828, and David Whitmer, a firsthand observer who lent assistance beginning in June 1829, gave some particulars. Harris gave the following testimony to Edward Stevenson:

Sentences would appear and were read by the Prophet and written by Martin, and when finished he would say, “Written,” and if correctly written, that sentence would disappear and another appear in its place, but if not written correctly it remained until corrected, so that the translation was just as it was engraven on the plates, precisely in the language then used.12

David Whitmer stated a similar procedure for the translation:

Joseph Smith would put the seer stone into a hat, and put his face in the hat, drawing it closely around his face to exclude the light; and in the darkness the spiritual light would shine. A piece of something resembling parchment would appear, and on that appeared the writing. One character at a time would appear, and under it was the interpretation in English. Brother Joseph would read off the English to Oliver Cowdery, who was his principal scribe, and when it was written down and repeated to Brother Joseph to see if it was correct, then it would disappear, and another character with the interpretation would appear. Thus the Book of Mormon was translated by the gift and power of God, and not by any power of man.13

Clearly, the main purpose of the interpreters was to assist the seer in the translation of the Book of Mormon. The testimonies of Emma Smith and David Whitmer agree that the Prophet used the Nephite interpreters to translate the first 116 pages, after which this instrument was returned to the angel in consequence of the incidents surrounding the lost manuscript. Thereafter, the seer stone was used, both instruments being essentially a “urim and thummim.”14

In such cases, when Joseph translated he was seeing some kind of vision. Furthermore, in the Doctrine and Covenants at least nine revelations were received by means of the Urim and Thummim and the seer stone—sections 3, 6, 7, 10, 11, 14, 15, 16, and 17.15 Since it is likely the information was conveyed to the Prophet in much the same manner as the translation of the Book of Mormon (that is, the words would appear in some fashion within the instruments), perhaps these revelations could be better described as “visions” received through the Nephite interpreters or the seer stone. Soon after the translation of the Book of Mormon was complete, visions using the seer stone as a medium seemed to cease. David Whitmer remembered Joseph saying that “we would all have to depend on the Holy Ghost hereafter to be guided into truth and obtain the will of the Lord.”16

14. “Now the first that my <husband> translated, [the book of Lehi] was translated by the use of the Urim, and Thummim, and that was the part that Martin Harris lost, after that he [Joseph] used a small stone [to translate the plates].” Emma Smith Bidamon to Emma Pilgrim, March 27, 1870, in John T. Clark, “Translation of Nephite Records,” The Return 4 (July 15, 1895): 2. Written from Nauvoo, the original letter is located in the Emma Smith Papers, Library-Archives, Community of Christ, Independence, Mo. David Whitmer stated: “This unpardonable carelessness [of giving Martin Harris the manuscript] evoked the stormiest kind of chastisement from the Lord, who took from the prophet the urim and thummum and otherwise expressed his condemnation. By fervent prayer and by otherwise humbling himself, the prophet, however, again found favor, and was presented with a . . . stone . . . which, it was promised, should serve the same purpose as the missing urim and thummim. . . . With this stone all of the present Book of Mormon was translated.” Cook, David Whitmer Interviews, 200; see also 72, 156–57, 175, 230.

15. Although not indicated in the historical record, it is likely that section 10 was received through the Urim and Thummim. Sections 3 and 10 were probably received through the Nephite interpreters since these revelations were given in conjunction with the loss of the 116 pages.

16. Whitmer, Address to All Believers, 32. The seer stone passed through a series of owners. Soon after the translation of the Book of Mormon was complete, Joseph Smith gave the stone to Oliver Cowdery, who possessed the stone until his death in 1848. That same year Phineas Young visited Oliver’s widow, Lucy Cowdery, and persuaded her to give it to him. He returned to Salt Lake City and presented it to his brother, Brigham Young. The stone has remained in the possession of the Church since that time. See Whitmer, Address to All Believers, 32; Cook, David Whitmer Interviews, 200; and Zina Young Card to F. D. Richards, July 31, 1896, F. D. Richards Letter Collection, Church History Library, as cited in Van Wagoner and Walker, “Gift of Seeing,” 66n53. Edward Stevenson remembered Joseph Smith using a seer stone at least four years after the Book of Mormon was translated. See Edward Stevenson, Reminiscences of Joseph the Prophet and the Coming Forth of the Book of Mormon (Salt Lake City: By the author, 1893), 6, available on Internet Archive, https://archive.org/stream/reminiscencesofj00stev#page/n9/mode/2up.