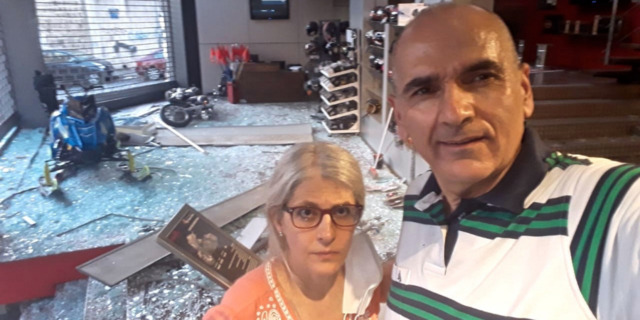 One blessing was the preservation of the Saints’ meeting place. A small congregation meets in Beirut on one floor of a high-rise building. The floors above were damaged by the explosion as was the retail store below, but the Church’s meeting rooms were untouched.

District President Maroun Akiki was at work when the explosion occurred, sitting at a desk with large front windows. Though there was debris all around him and he saw injured people running through the streets, he was not hurt. His wife, Roula, was traveling on a highway and the explosion pushed her car across two lanes, but she was also unharmed.

Some members in the area did have minor damage to their homes, but no one in the branch was injured according to the local Relief Society president, Somia Mohana.

The former district president, Karim Assouad, told Newsroom, “Everything is uncertain, unstable. But we know how to survive here in Lebanon.”

Lead image: Beirut District President Maroun Akiki and his wife, Roula, in the shop President Akiki manages, which was heavily damaged in the explosion on August 4, 2020. Image from Intellectual Reserve, Inc.