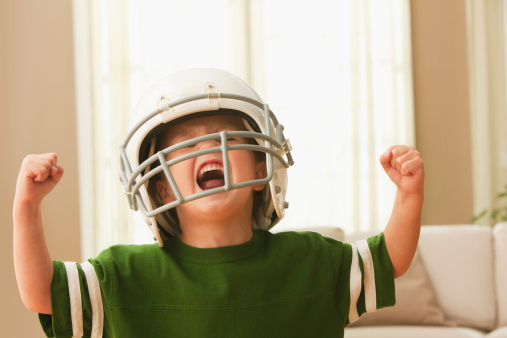 From couches all across the nation, Latter-day Saint football fans will scarcely blink as the first Monday Night Football games of the season flash across their television screens.

Many have weathered the past few months, enduring a dearth of football drama, waiting for this one night to get their gridiron fix—a night that also happens to be FHE.

Since September 1970, the Church has dubbed Monday night as family home evening night, a time to grow closer as a family while learning vital gospel principles.

And since September 1970, the NFL has marketed Monday for Monday Night Football.

The two have eventually caused friction in many Latter-day Saint homes, so why do they happen to fall on the same night?

In 1915, the First Presidency wrote to Church members:

"We advise and urge the inauguration of a 'Home Evening' throughout the Church, at which time fathers and mothers may gather their boys and girls about them in the home and teach them the word of the Lord. . . . This 'Home Evening' should be devoted to prayer, singing hymns, songs, instrumental music, scripture-reading, family topics and specific instruction on the principles of the Gospel, and on the ethical problems of life, as well as the duties and obligation of children to parents, the home, the Church, society, and the Nation," according eom.byu.edu.

However, there was no specified time frame or day of the week home evening should be accomplished.

As urban communities sprang up across the nation between 1915 and 1960 and some Latter-day Saint families began to move away from the rural, tight-knit family structure, Church leaders called for a renewed focus on home evening.

President David O. McKay emphasized this movement with his April 1964 conference talk in which he said, "No other success can compensate for failure in the home."

In 1967, stakes were encouraged to set aside an evening each week just for FHE and avoid scheduling Church activities on that day.

Then, a September 1970 the Priesthood Bulletin announced, "in a recent meeting the First Presidency and Council of the Twelve approved the setting aside of Monday night for holding family home evening throughout the entire Church. Encouragement is now given to stakes, missions, wards, and branches to reserve Monday evening for family home evening. … Families [should] be left free from Church activities so that they can meet together in family home evening" (Rex W. Allred, "I Have a Question", January 1987 Ensign).

Interestingly enough, the NFL commissioner at the time Pete Rozelle was closing on a deal with ABC for football games to be broadcast on prime-time television at least one day a week.

And on September 21, 1970, just a few weeks after the First Presidency announcement and Monday FHE, he got his wish and Monday Night Football, was born.