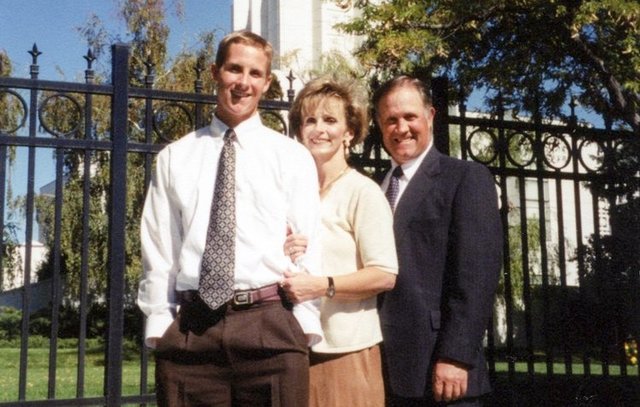 Shortly after my mother committed suicide by setting our home on fire, my father, younger brothers, and I temporarily moved with my aunt and her family.

Then another catastrophe came a few weeks later when a hail storm with golf ball-sized hail ripped through the family farm decimating my father's potato crop. My father became a modern-day Job.

A few days later, I walked into the kitchen one morning and found my father sobbing at the kitchen bar. He was trying to muffle his painful sobs in his weathered farmer hands. He could barely speak to me as he was gasping for air.

He said the night before, he had read the following passage of scripture in Matthew 7:7:

He said he then knelt by his bed and pleaded for answers from God. "God, you took my wife away. And then you took my house. Now you've taken my crop. Why? What am I supposed to do?" My father then fell asleep and had the following dream:

I found myself looking into a room filled with garbage and filth. Water began to flood the room and eventually washed the garbage and debris completely out. What was left, was a clean room that had no evidence of ever being dirty.

I was then taken to our home and found your mother standing next to me on the front porch. The house was back to normal and a feeling of joy and peace was present. We were both in our twenties again. We were twitterepated and in love and the excitement that we first felt when we were dating all came back. It was the feelings of why we got married. Your mother then grabbed my hand and started to walk with me.

I then stopped walking and in disbelief said to her "Wait, you're dead. Why did you do this to us? What are we supposed to do?"

With much grief in her face, she replied,  "I am so sorry. But everything is going to work out."

I then collapsed into your mother's lap and I sobbed as she held me.  And then woke up and found myself sobbing into my pillow.

My father then explained his interpretation of what he just saw. My mother's emotional health crippled her personality and her ability to safely love.  It changed her as a person and robbed her of the person she once was.

The garbage and debris in that room represented all of the bad memories. The times when my mother was not in her right mind. The times of her yelling and screaming and suicide attempts. The times she said she hated my father and she became nearly an impossible person to love.

The water represented the Savior's Atonement and His perfect ability to cleanse and make our lives whole again.  And then the tender mercy of God in allowing my father to experience one last time the reason why he married my mother and to see her for the person she truly is.

Several of my siblings and I had dreams too where our mother appeared to us just once. Her messages we're always short but tailored to our pleadings for comfort.

I believe in an afterlife with people who are concerned for us and a God who is pained when we are pained. I've had to draw on these experiences to remind me of God's love.