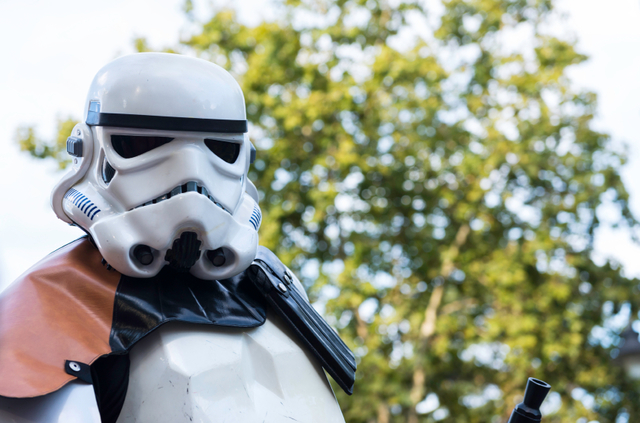 How “Star Wars,” “Harry Potter,” and “Interstellar” Actually Mirror Our Own Divine Stories

byNeal Silvester, Author of "The Hero Doctrine: Awakening to Your Eternal Potential" | Mar. 05, 2016

The grammatical construction should make it pretty obvious. Those are the words Jedi Master Yoda said as he pinches the flesh of Luke Skywalker’s shoulder. And they are words that should resonate in the mind of every Latter-day Saint.

As children of our Heavenly Father—literal children of a god—we are indeed something more than our limited, fallen bodies. We are made in God’s likeness and image, and as His spiritual children, we have the capacity to grow into beings like Him.

As such, God can be a mirror of our own destinies, a reflection of what is possible for us to obtain.

Elder Allan F. Packer recently referenced the stories of Luke Skywalker and Harry Potter to convey this same profound truth. I will do the same, with one addition: Christopher Nolan’s sci-fi film Interstellar. All offer deep insight into the divine pattern of a child becoming like its parents.

Luke Skywalker begins as an ordinary man working on a farm on a barren desert planet. There he unexpectedly receives the “call to adventure” that begins every hero’s journey—including our own. It could be the missionaries knocking on our door or a call to be a missionary ourselves, or really any kind of personal spiritual experience where we feel uniquely needed by the Lord for a quest. Danger and a desire for something more beckons, and with it the opportunity to rise to the occasion. After first rejecting the call, Skywalker later decides to follow the same path his father did toward becoming a Jedi.

Skywalker’s choices cause me to wonder, how many calls to adventure do we miss from the Lord—be it out of laziness or inconvenience or because we plain just weren’t listening—before we finally answer?

Having set foot on his new path, Luke starts to learn. Obi-Wan, Yoda, and the Force all become his mentors as his knowledge is tested as he meets many perils. Stormtroopers, a trash compactor, grief, despair, the seduction of the Dark Side—all present Luke with a chance to prove himself and grow in ways he could not otherwise. In our own stories, many sources of power and learning—whether they are parents, teachers, good friends, or the Holy Ghost—help us become agents, accountable beings who know right from wrong. Armed with knowledge and the capacity to choose for ourselves, we begin moving further along the path to becoming like our Heavenly Father.

In Star Wars, Luke’s transformation crystallizes with a “death and rebirth,” the baptism-like moment he descends into the abyss (the bottomless pit on Bespin) and returns a new creature (his reappearance in Jabba’s palace). He is figuratively resurrected in a more perfect form, and his outward appearance matches his inner transformation.

At the climax of his trials, Luke discovers not only his potential for goodness but his potential for evil as well. However, he not only rejects the temptations to join the Dark Side, but also boldly proclaims his inspiration for not giving in: “I am a Jedi, like my father before me.” These words stir an awakening in Darth Vader’s soul: the Sith Lord dies and Anakin Skywalker is reborn, a Jedi once more. Father and son are at one.

We, too, are to achieve an “Atonement with the Father” —an at-one-ment, that is— with the help of one who has “descended below all things.” Glorified as God is, to come closer to Him, we must root out all ungodliness found within us, leaving only our divine nature in its place. This is something we can only accomplish through our Savior’s atonement. Only then can we become one with the Father.

Luke vanquished evil, not only in the Galactic Empire, but also in the darkness possessing his father’s soul. We too, with the help of the Lord, must do the same within ourselves by ridding both our bodies and our spirits—our whole soul—of the evil in our nature. Luke’s words should be in all of our hearts when facing temptations: “I am a child of God, the offspring of a king.” For only when we remember both our identity and our destiny are we capable of becoming what we are born to be.

Harry Potter and the Prisoner of Azkaban

The overarching tale of the Harry Potter series is a profound one because of what we witness in Harry himself. He begins as a child and in the words of Dumbledore, ends as a “brave, brave man.”

Like Luke, one of Harry’s prime inspirations is his father, James. His father having died when he was a baby, Harry cannot remember James, but feels pride whenever a teacher or friend tells him he is like his father. James is the kind of man he wants to be, much like our Heavenly Father—who we cannot remember save through the stories and testimonies shared with us—is the type of divine person we want to become.

Perhaps the most revelatory experiences about Harry’s father come in the third book, Harry Potter and the Prisoner of Azkaban. Among other things, Harry learns that James was an animagus—he could transform into an animal, specifically, a stag.

In the climax of Prisoner of Azkaban, Harry finds himself cornered by a mass of Dementors. In vain he struggles to summon enough happy memories to produce a Patronus to ward off the dark creatures. At the moment he is ready to give up, Harry sees something miraculous. A great silvery, four-legged beast comes cantering across the lake, its light banishing the entire group of Dementors. Right before fading into total unconsciousness, Harry sees a figure on the other side of the lake, “someone who looked strangely familiar...but it couldn’t be.”

Later, Harry discovers a way to travel back in time with his friend Hermione to perform a double rescue. During a quiet moment in their adventure, and knowing he will sound crazy, Harry confides in Hermione that he thinks the figure who rescued him was his father. Hermione does think he sounds crazy—and she’s right that it’s not James.

This revelation awakens something within Harry. Realizing that three hours ago he had caught a glimpse of his future—or what we might call his potential—he raises his wand and casts the Patronus spell, thereby fulfilling that potential. The Patronus that emerges is in the form of a stag—the animal that represents his father.

At that moment, Harry had not only seen himself—he had seen his father’s image in himself. As he started down that path to becoming a man, he had come to look so much like his father that he almost couldn’t tell the diﬀerence.

As we grow to be the men and women we were destined to be, we too can see the image of our Heavenly Parents within ourselves, and that knowledge will give us the power to accomplish miraculous, even seemingly impossible things.

Though it is not overtly religious, Interstellar contains layers of meaning that speak of mankind’s divine potential and the necessity of achieving it. There is the symbolic contrast of a dust-enveloped earth against the stars of the heavens. There are the observant few who believe in mankind’s potential and see a future beyond this earth compared with the majority who forage to survive amidst the dust. And then there is the saving influence of unseen, godlike beings who turn out to be human beings, only much, much farther along their natural path of development.

But perhaps the most powerful spiritual analogy we receive from Interstellar is the one that is much more literally like Harry Potter and Luke Skywalker: the relationship between Cooper and his daughter, Murph. This father and daughter are as close as close can be. Cooper’s greatest joy comes from teaching Murph everything he knows. But, when Cooper must leave Earth on an interstellar mission to find another planet to call home, he does not know when he will come back, and Murph does not completely understand his reasons for leaving. She grows up with only a memory of him.

After years of no communication from her father, she loses faith that he will ever come back. She believes it’s up to her team of scientists on Earth to save themselves. At a crucial moment, even after she’s given up hope of ever seeing her father again, she finds a memento he left her all those years ago: a wristwatch that seems to be malfunctioning.

But attached to this watch is a feeling—a feeling of love, but not just that. It feels personified—it feels like her father. And she realizes that he is somehow manipulating the twitching hands of that wristwatch to send her a message in Morse code. The message turns out to be the immensely complex quantum data needed by the team back on Earth. They are then able to conquer gravity and launch the people of Earth up into space.

The denizens of Earth set up a temporary waystation near the wormhole, and call it “Cooper Station.” But it is not named for Cooper—it’s named for Murph, who decoded and delivered the message her father provided from afar. It is the same with us. Our Heavenly Father provides unseen guidance which we must be observant enough to see and feel. And these messages help direct us to something extraordinary—a new future. And, as we rise to this new glorified state, so does our Father’s glory arise from our achievements, our ascension.

It is the same story as the other two: as we shine the light and truth of our Father to the world, we find that it is also our light and truth—our own massive potential. Luke saw it when he invoked the legacy of Anakin Skywalker to reject the temptations of the Dark Side. Harry saw James within himself as he cast the most powerful spell he’d ever cast. Murph learned at her father’s knee and accomplished his work, allowing her and all the rest of humanity to “arise from the dust” of the world (2 Nephi 1:14) and join him amongst the stars.

The scriptures are of course the purest way to learn about the gospel. But truth and beauty can be found in uplifting stories all around us—if we have ears to hear them.

Find more great insights from Neal in his book The Hero Doctrine: Awakening to Your Eternal Potential, or by visiting his website at nealsilvester.com. Pick up your copy of The Hero Doctrine today at Deseret Book ordeseretbook.com.