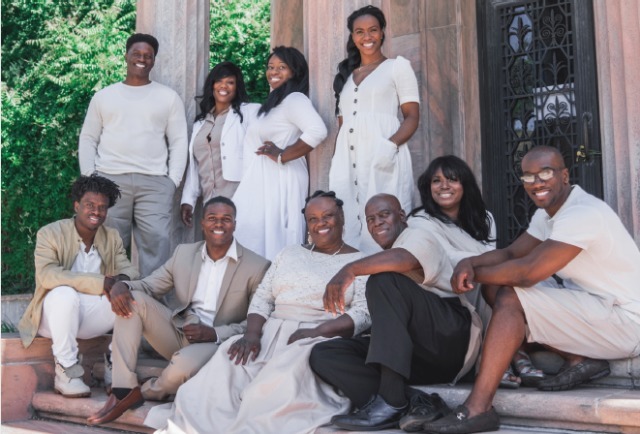 The Bonner family's recently released album began with one purpose in mind: a tribute to their mother, Debra Bonner.

It was in the fall of 2016 when their father, Harry Bonner, wanted the family’s eight children to record a song together for a Christmas gift for their mother. The song was titled, “I Am Here,” and was later featured on the Mormon Channel, garnering nearly 600,000 views. And according to son Yahosh Bonner, it was that experience that brought the family closer together.

“Music and the gospel of Jesus Christ unite us. We all love the Lord, love each other, and we love music,” Yahosh Bonner said. “After recording ‘I Am Here,’ and gaining such a great response, we felt like it was a calling, and we thought that we should do this more.”

► You'll also like: "A Home with Jesus": Family of 10 Talks Conversion, Homelessness, and the Power of Music

So, the family reached out to Shadow Mountain Records to see if it could help them make an album. As they were planning the album, the family was invited to be involved in creating the music for the movie Jane and Emma. One thing led to another, and the family’s oldest son, Mauli Jr. Bonner, ended up doing the scoring and writing the majority of the music for the soundtrack.

Around the same time, the family, including spouses and grandchildren, performed at the “Be One” celebration of The Church of Jesus Christ of Latter-day Saints in June that commemorated the 40th anniversary of the revelation on the priesthood. The Primary medley the family sang would be one of the songs included on the album.

“Being part of the 'Be One' celebration was an amazing experience,” Yahosh Bonner said. “This is his worldwide Church. Bring your culture. Bring your differences. African, Jamaican, Brazilian. We are all unified because of our faith. The program also united us more as a family because music brings us together. As you can imagine, with eight children, we all have our differences. Music unites us, and it is just awesome.”

Following the celebration, Mauli Jr. Bonner, who is a songwriter, producer, and vocal coach, began writing the music, often enlisting the help of family members. And soon, the songs were ready to be recorded and put on the album to help inspire others around the world.

The Bonner Family was released in October and is an extended play or EP. It's their first album together and features six songs inspired by doctrines of The Church of Jesus Christ of Latter-day Saints.

Here is what each of the Bonner children shared about their favorite songs on the album:

Nolong Ngei Bullock: My favorite song is “Child of God.” When Mauli Jr. brought it in for us to hear, we were in the recording studio. He was playing it and I could feel the spirit and the power of the song, and it filled the whole room. And then he started to shed a tear, and I knew that that song was truly inspired. I could feel the inspiration that permeated through all of us at that moment.

Listening to the words of the song, “When I’m strong enough to fly, brave enough to fall, have energy to climb …” All of those things that allow us to get over the tough times in our lives, that’s what makes us in his image. That’s what makes me his daughter. That’s what makes me just like him. Jesus Christ overcame so many things. Everything that we deal with, he dealt with in his life and he overcame it. He is the only begotten of the Father and I am also a daughter of God. Those words are so powerful to me. It’s my favorite piece. They’re all great songs, but this is definitely my favorite piece. Those words are life for me.

Yunga Webb Goslyn: My favorite song is “Never Alone” because of the duet I get to sing with my brother, and it just reminds me of the essence of what family is about, which is holding each other up, and through the Lord, anything is possible. It just kind of emulates all what our family is about. “When the fight is at the door, I’ll be standing next to you,” and I have definitely felt that throughout the years with all the challenges that life has brought. I’ve always felt that I’ve had a whole army of angels and best friends through the gospel and through my Heavenly Father. I’m so grateful for them, and I feel like “Never Alone” really speaks to that.

Mauli Jr. Bonner: My favorite is “Never Alone.” “Grace” is a close second. Never alone means friends and family supporting each other. I just love that message.

Clotile Bonner Farkas: My favorite song is “Child of God” because it talks about when we are put to the proof and when we feel his promptings throughout our life. All of his influence throughout our life and the daily struggles tells us that we are children of God. For me, it tells me that I am aspiring to be something better than I am. You know, when I’m strong enough to fly, brave enough to fall, have energy to climb my way over my walls, tells me I’m a child of God.

Words are so powerful, and I really love it because all of our family members kind of had some of our own insight into this song. Mauli Jr. wrote it and we all got to say, how we thought this verse should be phrased. It was a good collaborative experience for me, so “Child of God” is my favorite.

Yahosh Bonner: When we met together in the recording studio, and Mauli Jr. played the songs for us, the spirit was testifying to us that these were the songs that we needed to sing. When Jr. played the demo of "Child of God," which happens to be my favorite song on the album, we were all in tears. When you hear the song, it causes you to start looking at everyone as a child of God. The principle of being children of God helps us to love everyone. It also gives us value, and I love that.

Conlon Bonner: My favorite is “Grace.” Grace means so much. The grace of God and even Jesus Christ and what he’s done for us. Jesus Christ is everything to me and I feel his grace every day. I feel his grace at times when I feel I can’t do it by myself. I’ve had those moments, and I’ve felt his extra support, or him sending somebody to lift me exactly when I’ve needed it. “Grace” really tells about who God is. Junior, when he wrote this song, counseled with me about some of the thoughts that were going through his mind regarding the grace of God. I was so glad to contribute in that brainstorm as well as Oba and his insight. I love that song.

Oyoyo Joi Bonner: My favorite song on the EP is “Child of God” because of how many times it says “Child of God.” I am a child of God. It drills it into your head until you actually believe it. Like, if you didn’t believe it by the beginning of the song, you know it and can testify about it by the end of the song. Also, it’s a track that my eldest sister Nolong sings on the most, and hearing her voice is my favorite thing because I’ve heard it the least and hearing the tone of her voice is automatic comfort.

Oba Bonner: My favorite would have to be “Grace” as well. It was really nice being part of the writing process of this song. I like “Grace” because of how it makes me feel. I like how it moves me throughout the whole entire song. I feel like the song takes me on a journey, and so I really enjoyed that aspect and Conlin and Mauli Jr. did a great job in writing the song as well.

Next, according to Yahosh Bonner, members of the family, particularly Mauli Jr. Bonner, are working on music for Green Flake, an upcoming movie showing Green Flake, a black pioneer who was a bodyguard for the Prophet Joseph Smith, and was part of the first company to go west with Brigham Young in 1847.

“Working on movies like Jane and Emma and Green Flake gives many of us black Church members people to identify with,” Yahosh said. “I also believe it brings us all together in faith and understanding that we are all children of God.” 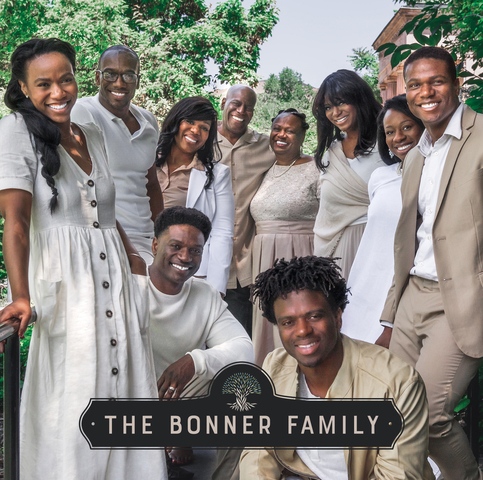 To listen to the inspiring album for yourself, check out The Bonner Family.

The Bonner family's first album features their expertly crafted vocal harmonies, soulful original songs, and a medley of beloved children's hymns. This is music that creates an atmosphere of peace, unity, and joy from one of the most talented families working in Christian music today.