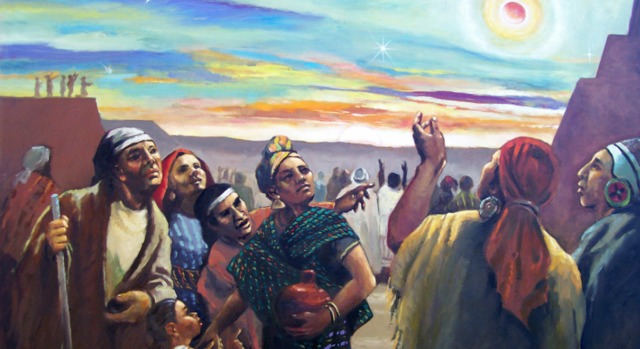 How Was There a Night Without Darkness? Astronomical Events Could Explain.

Many critics of the Book of Mormon use the night of no darkness leading up to the Savior's birth as proof the book is a fraud. However, many historical astronomical events support the idea that there can be a day and a night and a day without darkness.

When a Lamanite came into Zarahemla prophesying that there would be “great lights in heaven,” leading to a night with “no darkness … as if it was day,” and “many signs and wonders in heaven” (Helaman 14:2–6), some Nephites were skeptical, and even hostile (Helaman 16:2). In the next five years, both the skepticism and the hostility grew, and a date was set by which “all those who believed in those traditions should be put to death” if the sign failed to appear (3 Nephi 1:7, 9). Yet, as prophesied, “at the going down of the sun there was no darkness” and “it was as light as though it was mid-day” (vv. 15, 19).

Today, this prophetic sign remains difficult for some to believe. How could there be a night without darkness? Exactly how God produced such a sign is impossible to know for certain, but there are natural astronomical and atmospheric events which may shed some light on this matter.

Hugh Nibley suggested to his students once that this sign could have been caused by a supernova, comparing it to one in AD 1054 which “could be seen all over the world” and “was almost as bright as the sun.” Astronomers have documented a supernova in the 11th century which, according to lead researcher Frank Winkler, provided enough light that “people could probably have read manuscripts at midnight by its light.”