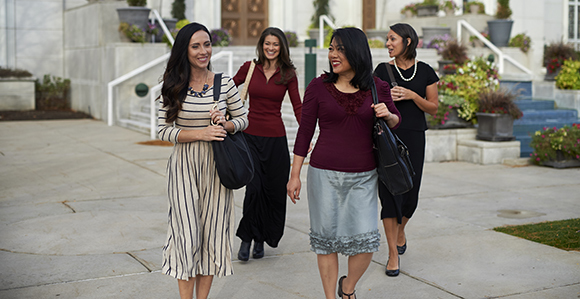 Yesterday, the First Presidency announced historic changes in The Church of Jesus Christ of Latter-day Saints that allow women and children to serve as witnesses for the sacred ordinances of baptism and baptism for the dead and for endowed women to serve as witnesses to temple sealings. President Russell M. Nelson rejoiced over these adjustments, saying, “Adjustments allow for covenants to be planted in the hearts of people living in different times and circumstances. . . . We are joyful about these changes. Imagine a beloved sister serving as a witness to the living baptism of her younger brother. Imagine a mature couple serving as witnesses in the temple baptistry as their grandson baptizes their granddaughter for and in behalf of a dear ancestor.”

President Nelson also stressed that the Lord "has and always will direct how ordinances are to be performed so that we can understand and internalize our covenants with Him."

Over the past 24 hours, as I've reflected on these changes, I've realized that they fall in line with God's will and work since the beginning of time. Women in the Bible, Book of Mormon, and early Church history have stood as powerful witnesses of events that have and will shape the eternities. Even during times when the world viewed women as having less power, significance, or status in society, our Heavenly Parents and Jesus Christ have demonstrated the divine value of women since the Creation.

Eve was the first mortal witness of the eternal family and the sacrifice required to bring children into the world. She and Adam witnessed God and the Savior and the covenants instituted upon the earth after the Fall.

About Rebekah, Elder Bruce R. McConkie related, “I think Rebekah is one of the greatest patterns in all the revelations of what a woman can do to influence a family in righteousness.” To Rebekah, Elder McConkie explained, the Lord revealed “the destiny of nations that are to be born that are yet in your womb.” Rebekah was a witness to visions and to the Lord's forthcoming work and people.

Esther's witness before a king saved a nation. Ruth's witness and testimony of love and family bonds created the family line that would bring the Savior into the world. Abish's witness before the Lamanite people led to the conversion and redemption of thousands.

Mary was a witness to the coming of the Redeemer of the world and a witness and influence in His life and ministry. The woman at the well became the first witness to hear Christ declare that He was the chosen Messiah. Mary Magdalene became the first witness to the Savior's resurrection. Nephite women, men, and children witnessed Jesus Christ's ministry in the Americas, His institution of the sacrament and sacred ordinances, and the reality of angels.

► You'll also like: Christ and Women—4 Powerful Moments from the New Testament

In more recent Church history, Emma Smith was a witness to the translation of the Book of Mormon and Mary Whitmer was the first witness, aside from Joseph Smith, to see the Golden Plates when the angel Moroni revealed them to her.

Women were witnesses to the endowment in the Red Brick Store in Nauvoo, Illinois, and witnesses to the establishment of the Relief Society, to the ministering of angels, to revelation, to temples, and to the restoration of Christ's Church again on the earth. That witness carries to women today who are pivotal in moving the Lord's work forward as we serve as missionaries, leaders, and teachers.

I am grateful to be a part of a Church that recognizes the eternal and divine power of women and to be able to stand as a witness and share my testimony of the love, light, and saving grace of my Savior, Jesus Christ.