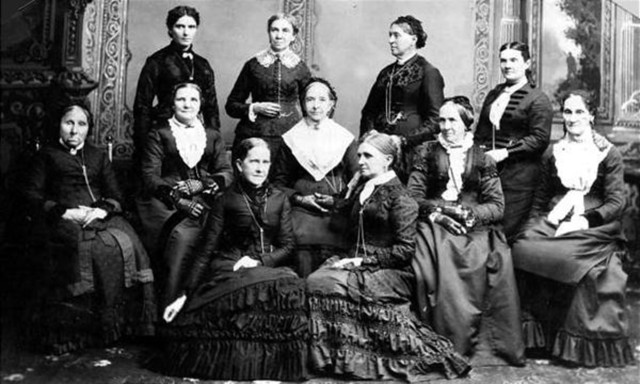 How Women of the Early Relief Society Served Nationally and Globally

“There is no limit to the work before us.”

Joseph Smith prophesied that Latter-day Saint women would reach beyond their local congregations to have a global impact: “This Society shall have power to command Queens in their midst . . . they shall come with their millions and shall contribute of their abundance for the relief of the poor” (FFY 1.2.12, 58). Throughout the 19th century, Relief Society members became involved in national and international women’s associations, including the National Suffrage Association, the National Council of Women, and the International Council of Women (see FFY 4.27, 579-88). Such activity allowed Latter-day Saint women to participate in, coordinate with, and represent themselves in diverse groups with similar concerns: to give women a public forum and to improve humanity at large.

Fifty years after Joseph Smith’s prophecy of Latter-day Saint women’s potential, at the Jubilee celebration of the Relief Society in Salt Lake City in 1892, General President Zina D. H. Young remembered Joseph’s words: “We this day with the saints of God everywhere, honor the name of his integrity to God.” She hoped to inspire women to reach out to the “whole human family.” Bathsheba W. Smith described the previous 50 years of Relief Society service as a “labor of Love” (FFY 4.28, 594, 613). The First Fifty Years of Relief Society reveals the extended global efforts of Latter-day Saint women in speaking and writing for the press, which significantly increased their visibility and political and civic influence. Their efforts encourage us today to be active, to speak up, and to expand our Relief Society activity beyond the walls of our churches.

Assisting People of Other Faiths and Cultures

Latter-day Saint pioneers to the West did not arrive to an empty, arid land; the area was inhabited by American Indians who resented the steadily increasing Latter-day Saint presence, resulting in several skirmishes. In the early 1850s, Brigham Young and Parley P. Pratt encouraged Saints to heal fractured relationships and assigned women to assist their native neighbors. A cluster of women throughout Salt Lake City organized a “Society of females for the purpose of making clothing for Indian women and children” in February 1854 (FFY 2.1, 188-97). Young then asked wards to organize Relief Societies for this purpose. In September 1856, the Salt Lake City Fourteenth Ward Relief Society was formed. Their object was “the relief of the destitute—unemployed, and all whom it may have power to relieve or do good” (FFY 2.3, 213). These early record books mostly contain donations and names of participants. Beyond numbers and names, we see the spirit of Relief Society, their desire to lift and improve the dire circumstances of their neighbors, regardless of religious faith.

In our day, we have been given a distinct charge from former Relief Society General President Linda K. Burton to seek after and serve refugees in our towns and cities. She stated, “As sisters, we make up more than half of the Lord’s storehouse to help Heavenly Father’s children. His storehouse is not composed just of goods but also of time, talents, skills, and our divine nature.”1 This effort requires us to be aware of larger global needs. How can we reach beyond our church congregations? What difference does this make in our lives? How does such service help us understand Jesus Christ and partner with Him?

From the beginning, Latter-day Saints have responded to political action that severely affected their rights as citizens. On 22 July 1842, Nauvoo Relief Society women sent a petition to the Illinois governor requesting protection (see FFY 1.5, 136-41) On 6 January 1870, the Salt Lake City Fifteenth Ward Relief Society declared: “We should rise up in the Dignity of our calling and speak for ourselves, . . . that we express our feelings and not remain silent” (FFY 3.12, 307). A week later, Eliza R. Snow said, “I wish to say to my sisters, to the mothers in Israel and to the daughters, cultivate in your bosoms the spirit of freedom and liberty which has been bequeathed unto us. . . . Let them manifest their own bravery and cherish a spirit of encountering difficulties, because they have to be met more or less in every situation of life” (FFY 3.13, 331-32). We, too, live in a time of contested political activities and diverse opinions. What is our responsibility to make sure the Church is represented accurately? While we must learn to respect each other, we must also find ways to speak up, to defend the religious beliefs and practices of others at the same time we diplomatically express our own beliefs. This is part of our Relief Society heritage.

George Q. Cannon wrote an editorial for the Deseret News on 8 February 1870 recognizing the importance of the vote for women: “We believe in the rights of suffrage being enjoyed by all who can exercise it intelligently.” As you read his article, pay attention to how he viewed women’s responsibility (FFY 3.14, 335-36). With the support of both Church and territorial leaders, Utah women were granted suffrage on 12 February 1870. They were the second in the nation to gain suffrage, following Wyoming Territory (see FFY 3.17, 350-52). Hundreds of women enthusiastically embraced the opportunity to elect political representation. This was not a right that Latter-day Saint women took lightly. They voted; they ran for office; they participated in local and national suffrage associations. They recognized the power of their voices and their representation. Women in nearly every settlement organized suffrage associations with a state organization that coordinated with national campaigns. Federal anti-polygamy legislation, however, removed that right in 1882, and Utah women would not regain the vote until Utah statehood in 1896 (see FFY 441-43).

Participation with national suffrage organizations brought Latter-day Saint women into national and global affiliations. In early 1891, Emmeline B. Wells reported her trip to Washington, DC, where she and others from Utah met with national and international women leaders. Latter-day Saint women made sure their voices were included in the larger global conversation. How can we educate ourselves on current events and public policies using appropriate sources? How do we continue to honor and pass on this Relief Society legacy of service and political activism while maintaining the true spirit of Christ? 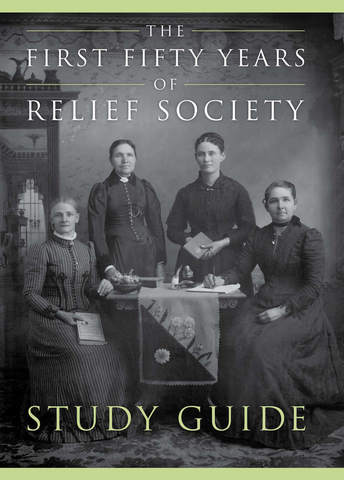 In 2016, the Church Historian’s Press published a long-awaited collection of 19th-century Latter-day Saint women’s documents—an institutional history of the Relief Society from 1842 to 1892. The First Fifty Years of Relief Society is a resource to scholars and general readers, placing women with men at the forefront of the Church. But its physical heft and scholarly composition can easily intimidate a general reader. This eBook study guide is a starting point for readers to better understand these essential documents and have conversations about what they mean for us today. Highlighting some of the more outstanding teachings and insights from the book, this guide will help you connect with your Relief Society sisters of the past and apply their wisdom and knowledge to your daily life.

Patrick Kearon, “Refuge from the Storm,” Ensign, May 2016