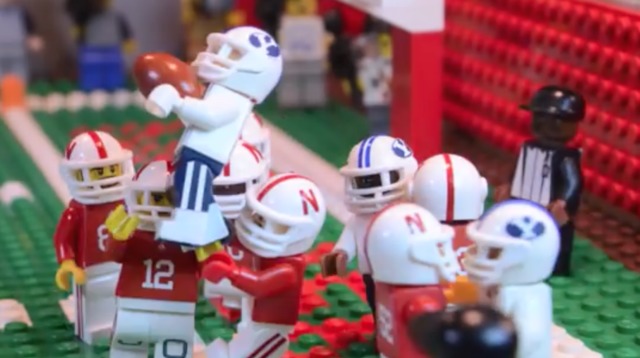 His motion-stop videos starring LEGO figurines garner thousands of views on Instagram and captured the attention of the Big Ten Network, which now pays Jacobs to make mini-movies of college football plays.

But these viral videos all began with a set of LEGOs that didn't even belong to Jacobs.

I've had the #OhioState fight song stuck in my head all day because of this video! #goldyeller

Jacobs, who graduated from BYU-Idaho, began as an art major before a conversation with his father lead him to switch to business management.

Still, Jacobs posted rap videos to YouTube after he graduated during his free time and later attended Anaheim’s VidCon to learn more about making online videos.

All of his work lead up to a Thanksgiving vacation at his in-laws in Idaho Falls.

Since then, Jacobs has created about 50 motion-stop videos which range from Ghostbusters scenes to a video of Bob Ross painting.

But some of his most popular material are monumental moments in sports history, including Tiger Woods's famous chip shot at the 2005 Masters and BYU's Tanner Mangum game-winning Hail Mary pass against Nebraska. And no attention to detail was spared, Jacobs even added a football made out of putty strung up on fishing line to make Mangum's pass look just as incredible as it was in real life.

And if you look closely, you just might see a few "Easter eggs" or nods to celebrities and pop culture in Jacobs videos, like Tom Brady standing in the background of the Tiger Woods video.

While some may think Jacobs, a father of three children with a job as a marketing specialist for Franklin Building Supply, has plenty of time to tediously move each character for each frame of the 130–150 still frame photos it takes to make each video, he doesn't. But he does it anyway, sometimes staying up late into the night to create his masterpieces in his living room.

And his dedication has paid off.

When the Big Ten Network found out about Jacobs abilities, they approached him with a deal to pay him to create 10 stop-motion mini-movies, one per week, for the rest of the football season.

Ensuring that more of Jacobs's video creations are sure to follow.