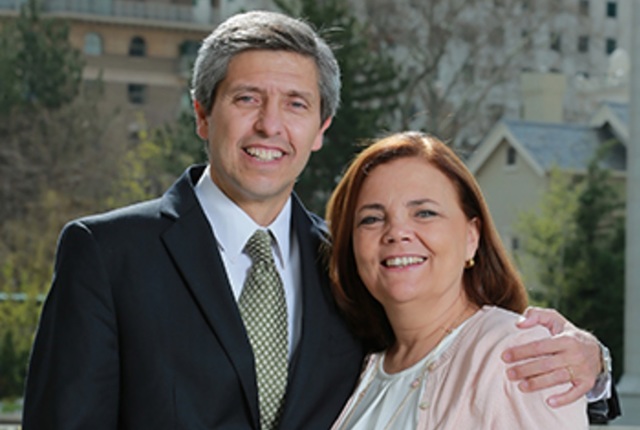 “She received a mission call; I received a marriage call,” said Elder Joaquin Estevan Costa about the beautiful young woman he met in Buenos Aires, Renée Varela. It had been, he said, love at first sight for him. But Elder Costa found far more than he bargained for when he began to pursue this new love.

Elder Joaquin Esteban Costa has a message he wants to share with all people: Studying the Book of Mormon is the best way to know Jesus Christ.

Two days after he was sustained as a General Authority Seventy during the Saturday afternoon session of the 186th Annual General Conference, Elder Costa and his wife, Renée Valera Costa, told the Church News how the Book of Mormon became one of the most important elements in their lives.

When he was a 21-year-old university student in Buenos Aires, Argentina, a friend introduced him to Renée Varela. She hesitated before accepting a date with Joaquin because he was not a member of the Church, but eventually agreed to go on one date. That date led to others. By the time they had gone on their fourth date, she decided she “liked him too much” and told him she felt they shouldn’t date anymore. At the end of the school year, they went to their homes in different parts of Argentina.