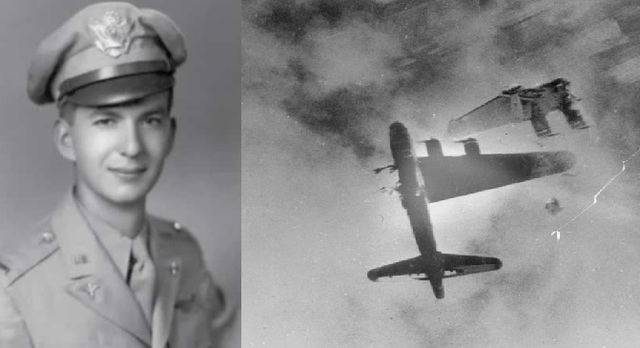 While carrying out a mission as a B-17 bomber pilot during WWII, Lieutenant Wendell Bradford Terry (Mike to his friends) and his crew flew through thick flak and antiaircraft fire while passing over the French coastline. The left wing of Terry's plane was hit by an antiaircraft shell, causing a large portion of the wing to break off and both of the left engines to stop functioning, sending the plane in a downward spiral. In addition, the wing caught fire and the flames moved toward the aviation fuel tank, which would cause a deadly explosion. It was then Terry rang the alarm bell and screamed into the intercom: “Bail out! Bail out! Bail out!”

It is no surprise that at a time like this, full, blinding, terrifying panic sets in. Your mind is screaming that you’re going to die, and you’re almost frozen into immobility. Fortunately, at that point, training and instinct kicked in. . . .

Terry fought with all his strength by turning the yoke as far as it would go to the right and then locking it into position, all the while yelling for the crew to bail out. For the moment, his efforts were working, and the plane’s spiraling widened and slowed somewhat. They hadn’t gone into a full spin yet, but the plane was dropping like a rock at close to two hundred miles per hour or more.

From the screaming and yelling in the compartment below, Mike knew things were not going as planned. The emergency hatch located on the left side of the fuselage near the front of the wing was a small door about two-and-a-half feet square. A man could get through it, but only by exiting feet first or head first. When on the ground, the door was easily opened by a latch. But in a plane plunging downward at two hundred miles per hour, the airspeed creates a force so strong that it’s impossible to push the door open. For just that contingency, the aircraft engineers had rigged the door with an emergency release system. The door had two hinge pins, just like you’d see on a normal door, but these pins had two wires attached to them. The other ends of the wires were attached to a short wooden handle, which was painted red and mounted on the bulkhead near the door. The idea was to grab the wooden handle and pull hard. This would pull out the hinge pins, which would then allow the natural suction of the wind to rip the door away.

Terry could tell from the commotion that the copilot and others had reached the escape hatch and yanked on the emergency hatch release. Any second now, the plane was going to blow or start spinning so violently that none of them would be able to get out.

The scene down below was pure panic. When the copilot reached the escape hatch, fighting to stay on his feet, he yanked on the emergency hatch release. But instead of the pins coming free, both wires snapped—perhaps because he yanked them so hard in his panic—leaving the pins in place and the door still tightly shut. So while the other crew members were bailing out through the rear and side exits, those up front were now trapped. The men tried to push the door open, but between the centrifugal force and the airspeed, it wouldn’t budge.

The copilot hammered at the hatch with his fists and tried to shove it open with his shoulder. The bombardier, navigator, and flight engineer were screaming at him to try harder or to get out of the way. Then the engineer took things into his own hands. Putting his back firmly against a bulkhead, he braced himself. Then he raised both feet, planted them squarely in the center of the copilot’s back, and pushed with all his might. The hatch suddenly opened partway. There was a startled yell as a blast of cold air hit them and the copilot was sucked out. The flight engineer went next, with the bombardier propelling him out the door.

Up above, Terry heard the men escaping and thought they were all out. He put the plummeting plane on autopilot, hoping that would keep it steady enough for him to get out. But as he slid down onto the deck below, he saw that the escape door was shut and that his bombardier was there alone. Yelling over the noise, the bombardier quickly told Terry what had happened. Terry didn’t hesitate. He braced himself, planted his feet against the bombardier’s back, and shoved with all his strength. A moment later the bombardier was gone too.

It was a huge relief to know that all of the crew had made it out. But then it hit him. Except for me! With that realization, Terry almost fainted. He was alone. He couldn’t open the door against the pressure of the airstream, and there was no one to push him through it. How was he going to get out? He thought about trying to make his way back through the plane to the main door, but the bomber was going down too fast and was spiraling more and more violently.

And there was something else, too. As he had set the autopilot and left the cockpit, Terry had seen that the remaining portion of the left wing was now consumed with fire, which was rapidly spreading to the fuselage. Those gasoline tanks were going to blow at any second, and if they did, he would be incinerated. He had to get out, and he had to get out now!

There is an expression used by people who have gone through a near-death experience. They say, “In an instant, my whole life flashed before my eyes.” Terry wasn’t sure that’s exactly what happened to him, but a million things went through his mind at that instant. And to his surprise, one of them was Sister Duckworth, his Primary teacher from years before. He was remembering a day when she had yelled at the boys in the class to sit down and shut up. In his mind’s eye, Terry saw it all—Sister Duckworth stamping her foot, the boys shocked and cowed, meekly returning to their seats. And he again heard her words: “Someday you boys are going to find yourselves in a situation where you’re going to want very much to talk to your Heavenly Father. So you’d better learn now how to do that.” . . .

The memories flashed through Terry’s mind in a second. Years later, he would still clearly remember how stunned he was at those thoughts. Here he was plummeting downward with such force that he could barely stay on his feet. He was terrorized and convinced that he was about to die. He was wondering if he’d ever see his wife again. And then, Sister Duckworth came into his mind and he remembered her words.

So Terry prayed, thinking it had to be the shortest and most intense prayer that Heavenly Father had ever heard. Looking back, he wouldn’t remember stopping to listen for a response, but he did remember the prompting: “Don’t wait; do something!” Terry would never be sure how he got out of that plane. He could remember grabbing the handles above the door, putting his feet against the bulkhead, and lunging for the hatch. Did the door break off? Or did it open just long enough for him to be sucked out? He could not say. But he could recall the sensation of being ripped out of the plane.

Terry was shocked by the force of the blast of wind as it hit. By this time, the fuselage right above him was fully aflame, badly scorching his eyebrows and hair. Then, as he came through the hatch, he saw that the ball turret gunner had left his machine guns pointing forward. Now they were just a few feet from Terry and directly in the path of his tumbling body. He could picture himself hitting those machine guns at full speed, landing in a straddling position, probably dead. Miraculously, he barely missed them. And as he saw the guns flash by, he knew how lucky he was.

Still dazed and confused as he started to free-fall, Terry knew he had three things for which he should be very grateful. He was alive. Heavenly Father had heard his cry for help. And Sister Duckworth had been exactly right those many years before. 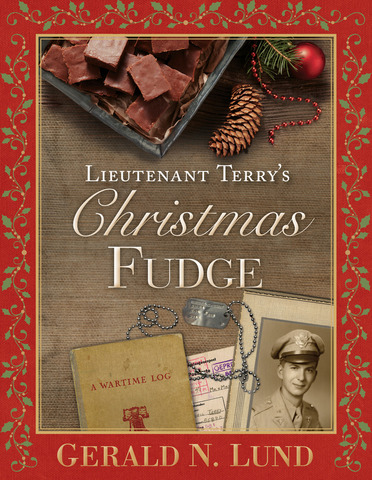 On a mission to bomb a French bridge and slow down Hitler's retreating army, U.S. bomber pilot Wendell B. Terry miraculously survived a harrowing parachute jump after his plan was hit by enemy fire. Scorched by the burning plane, he landed amid German SS troops and soon found himself in a German prisoner-of-war camp. He shared a cement room with 23 other prisoners. He lived with a dirt floor, no heat to ward off the bitter cold, one small window, and not much to do. To make matters worse, Christmas was approaching, and Lieutenant Terry's heart ached for his new wife and their child who would soon be born.

Brought to life with original drawings by Lieutenant Terry himself, this heartwarming true story of sharing what little you have even in the direst of circumstances will inspire you to look for small ways to bring joy to others. Charmingly retold by beloved author Gerald N. Lund, Lieutenant Terry's Christmas Fudge is a classic tale you'll want to revisit every Christmas for years to come.