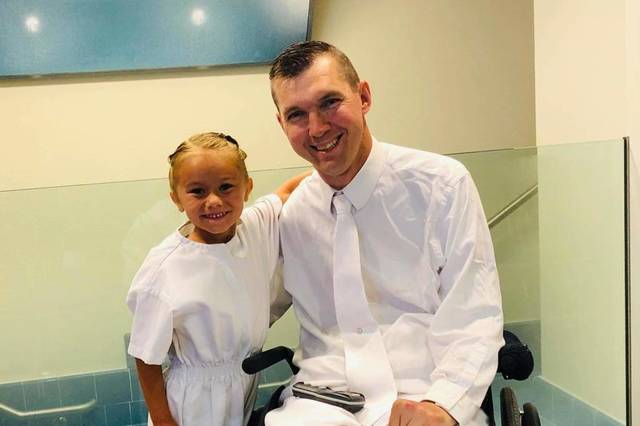 On June 1 in Cedar City, Utah, Jarom Hlebasko entered a baptismal font and faced his 8-year-old daughter, Miree, ready to baptize her a member of The Church of Jesus Christ of Latter-day Saints. At that moment, feelings of gratitude and fulfillment washed over him — gratitude because there was a time in his life when he didn’t think performing such baptism would be possible, and fulfillment because once again he was realizing a blessing pronounced years before.

In the winter of 2000, 18-year-old Hlebasko was enjoying time with his friends in the new-fallen snow. Just about to leave, he decided to have one last jump into the soft, deep powder. Rather than him landing softly in the snow, his head hit a mound of hard ground hidden below the snow’s surface, and he immediately recognized the magnitude of his accident.

“I remember laying under the snow and being completely awake, but not being able to move anything,” Hlebasko recalled. “All I could do was lay there and call for help in what wasn’t much more than a whisper — and just pray that my friends would come find me.”

Mormon Life BaptismBaptism,Mormon Life
Comments and feedback can be sent to feedback@ldsliving.com