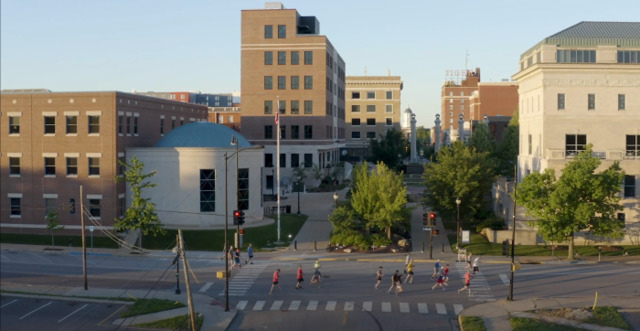 On July 4, 1839, Parley P. Pratt broke out of the Columbia, Missouri, jail and ran for freedom. Pratt, who was then a member of the Quorum of the Twelve Apostles, had been arrested because of his participation in a battle against Missourians when Latter-day Saints were expelled from the state in 1838–39. After spending months in jail, he had a dream in which his late first wife promised he would eventually be free. Fittingly, July 4 would be the day Pratt made his escape. He successfully returned to the main body of Saints in Nauvoo, Illinois, and would later lead a large wagon company across the plains to the Salt Lake Valley.

Over 180 years later, members of the local community are joining Latter-day Saints for the first time in the Columbia Missouri Stake's annual Parley P. Pratt Freedom Run. On the four-mile journey, the community plans to honor their First Amendment freedoms as they run pass historic markers in their city. 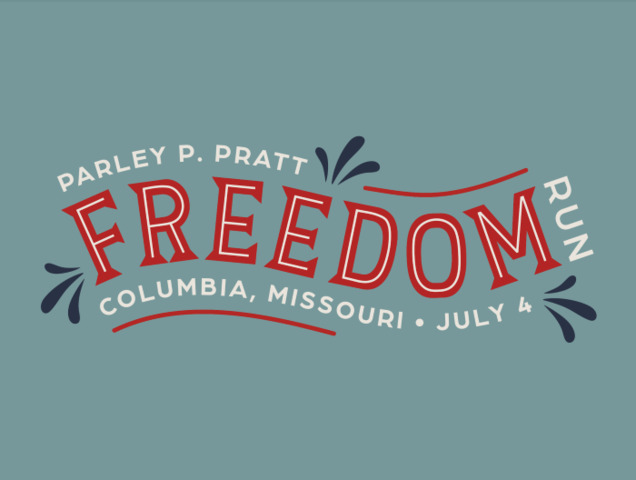 Latter-day Saint Newell Kitchen has organized the Parley P. Pratt Freedom Run for his stake for 25 years, aiming to help members appreciate the freedoms they have now by remembering what Parley P. Pratt went through for his beliefs. And while the pandemic has stopped the official race from being held this year, the community hasn’t stopped finding ways to commemorate.

“We want to recognize that story and use that as [a] foundation to celebrate our freedoms and celebrate the freedoms of people of all different kinds,” says Kitchen.

Earlier this year, Kitchen was approached by his county commissioner, Janet M. Thompson, who was looking to hold an event downtown to help celebrate the bicentennial anniversary of Boone County, which is home for Columbia city residents. After discussing the history and meaning behind the race with Kitchen, Thompson felt the freedom run would be a welcome addition to the county’s celebrations.

Columbia Missouri Stake President Harvey James was enthusiastic about welcoming the county to the run, but he had one stipulation: Parley P. Pratt’s name had to stay.

“I wanted to make sure that history—that important message behind the Parley P. Pratt story and what that means for religious and other freedoms . . . remains,” says James.

Thompson agreed to keep Pratt’s name in the title and race preparations began. A new route was drawn that would weave runners past important First Amendment symbols in the city, including the Missouri School of Journalism, 18 different houses of faith, United States President Thomas Jefferson’s grave marker, and the site of Parley P. Pratt’s run for freedom.

“Back in 1839 if you were a member of the . . . Church, well, you could be incarcerated for that . . . so you probably wouldn’t find a house of worship for that group of people in downtown Columbia,” said Thompson in a video describing the freedom run.

Now, the Parley P. Pratt Freedom Run stands as evidence of how far Columbia has come in supporting religious freedom and acceptance.

In his role as stake president, James says he has noticed that the message of religious acceptance “resonates with people today more than ever.” For Kitchen, the community’s involvement this year has helped him remember why he keeps up the tradition.

“It’s coming home now why I keep doing this because of what happened this year. Because it’s turned into something much more magical, much more far-reaching,” says Kitchen. 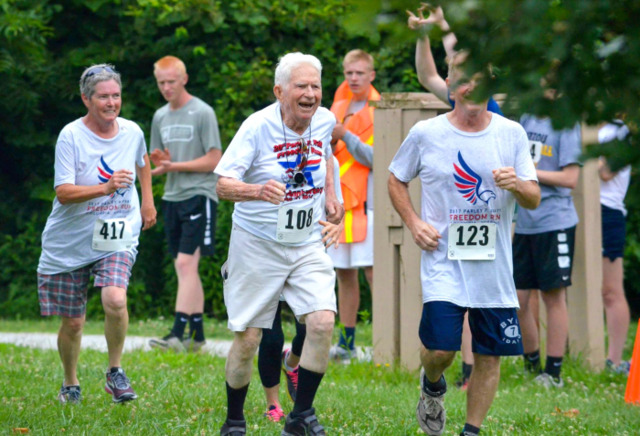 The late Gerald Neuffer runs in the 2017 Parley P. Pratt Freedom Run. Neuffer was the great-great grandson of Parley P. Pratt and ran in the race every year until he passed away in 2019 at the age of 97. Image courtesy of the Kitchen family.

Part of that extended reach comes from a video Kitchen helped produce that tells Parley P. Pratt’s story and interviews prominent religious, academic, and social leaders in Columbia on the importance of First Amendment freedoms. Kitchen has been approached by community members who have watched and loved the video.

He recently ran into a schoolteacher at a store checkout line who told him she had seen and loved the video. She then said, “I am going to get with the superintendent of Columbia School District and ask that this be distributed to all the students.”

The Deeper Meaning of Independence Day

Thanks to the freedom run, Kitchen and his family have long felt the magic of recognizing the deeper meaning of Independence Day, and they are hoping this year’s race will help more families feel it, too.

“Families oftentimes for Christmas are going to do all the fun things, and the food, and the festivities and presents, but they also usually take some time to focus on Christ. If you’re a Catholic, you are going to go to a special Christmas mass—you want to get to the most important part of what that holiday is all about. Well, this is kind of an event that’s developed to help us focus on substance as to why we have Independence Day,” says Kitchen.

Because of the COVID-19 pandemic restrictions, Kitchen and his team had to cancel the formal gathering for the race, but they are still encouraging people to run the route on their own time during the Fourth of July weekend. Kitchen’s daughter, Karina Crookston, created an interactive PDF people can download to read more about the First Amendment symbols they will pass on the route. Some of those symbols include two local newspaper offices, the University of Missouri School of Law, and the Boone County courthouse. 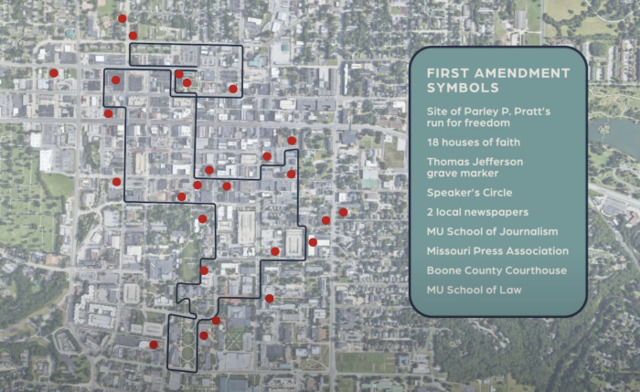 But Kitchen and his family aren’t the only ones eager to help the Columbia community cherish and celebrate First Amendment freedoms. As Kitchen reached out to leaders in the area to interview for the freedom run video, he says it was “amazing how willing the people we were contacting were to come and contribute their voices.” That passion for promoting and preserving freedom is evident with every interview.

“I can’t imagine life in America without having that freedom. We would not be a democracy if we were not able to speak as we need to speak,” said Mary A. Ratliff, president of NAACP Columbia, in the video. “I keep my Constitution on my desk at all times because I refer to it daily. I want to make sure that I am versed on those things that I hear nationally. . . I want to make sure that [they are] constitutional.”

After helping conduct these interviews, Crookston commented, “Hearing all of the voices of freedom come from so many different people with such diverse backgrounds. . . increased my love for all of God’s children and how we are really all the same, and we want the same things.” 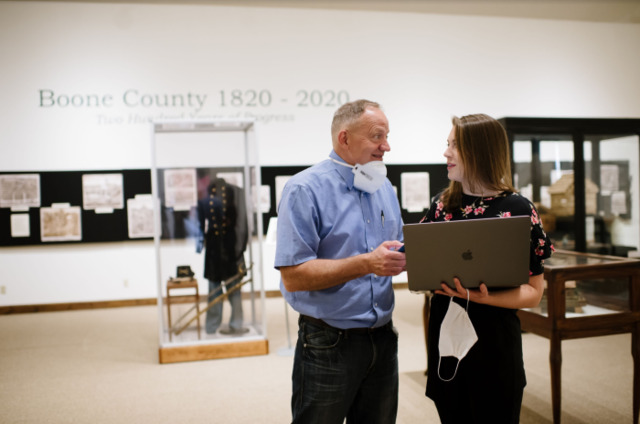 This year’s freedom run is unique not only because it celebrates the county’s 200th anniversary, but it also celebrates the 50th anniversary of the Columbia Missouri Stake. In addition to the freedom run, Kitchen and James created a year-long calendar of special events and activities to encourage members to celebrate the history of the Church in the area. The calendar became even more meaningful when COVID-19 restrictions prevented physical church gatherings.

“This 50-year celebration I think helped us as a stake stay connected to each other, even if we couldn’t meet together,” says James.

One of the activities was to bake and decorate a cake in honor of the stake’s “birthday” on July 19. Members in the wards connected with each other by sharing pictures of their completed cakes on the stake’s Facebook page. 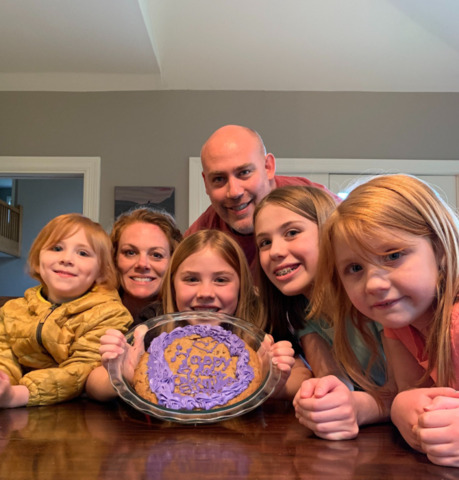 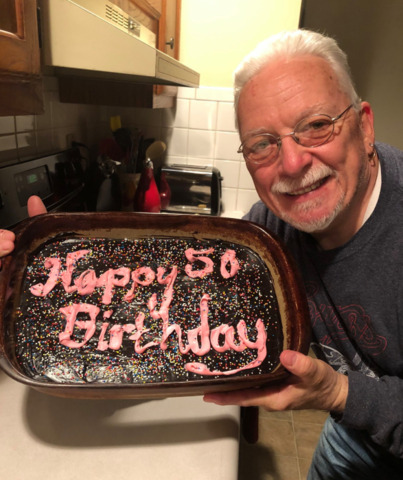 James believes that intentionally celebrating important anniversaries helps members to get excited about being a part of the Church.

“I think it’s important to celebrate our anniversary for the same reason that the Brethren believe it is important for us to celebrate 200 years since the First Vision—and any other kinds of milestones that we hit as members of the Church. Our past matters, our future matters, and celebrating these milestones connects our past to where we are now,” says James.

Kitchen believes that taking the time to connect to the past will help members better see themselves as participants in the gathering of Israel.

“We are contributing to gathering, but sometimes [we don’t] think we are a part of something big when we are in the moment,” says Kitchen. “I was hoping that video would help current membership of the stake to see themselves as being real contributors to the gathering of Israel. This is happening here in our stake. . . with the little things you do in your life here in the Columbia, Missouri, area.” 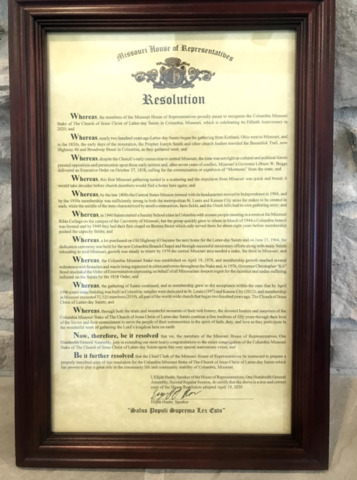 Members of the Church and those participating in the race aren’t the only ones celebrating the stake’s anniversary. The Missouri House of Representatives passed a resolution expressing their “most hearty congratulations to the entire congregation of the Columbia Missouri Stake.”

“The devoted leaders and members of the Columbia Missouri Stake of The Church of Jesus Christ of Latter-day Saints continue a fine tradition of 50 years through their love of the Savior and their commitment to serve the people of their communities in the spirit of faith, duty, and love as they participate in the wonderful work of gathering the Lord’s kingdom here on earth,” according to the statement.

A Day to Remember

In the end, the goal of the Parley P. Pratt Freedom Run is to provide a way for Independence Day to be even more meaningful for the community—the way it has long been for the Kitchen family. 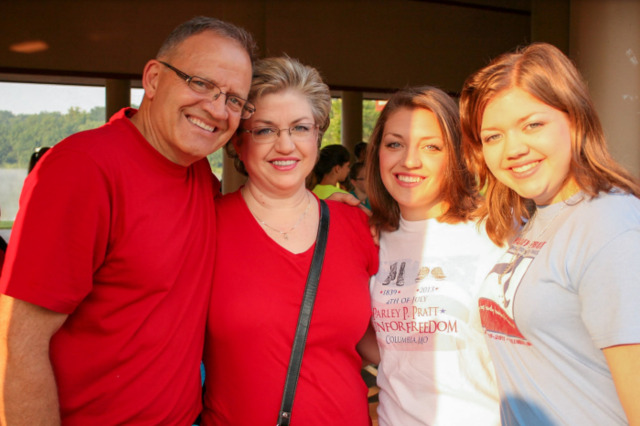 Newell and Suzanne Kitchen with their daughters Karina Crookston and Savannah Kitchen. Not pictured is the Kitchen's oldest daughter, Tamara Haviland.  Image courtesy of the Kitchen family.

“I just loved the tradition of starting the day with focusing on freedom and celebrating that specifically through this run. There was one year that I was [away from home] during the Fourth of July week, and I was so depressed that day because it wasn’t the Fourth of July without the Parley P. Pratt run,” says Crookston.

Crookston also expressed gratitude over being able to serve on the run’s planning committee this year because it helped her get in the spirit of the holiday in advance.

“It’s like when you start listening to Christmas music the month before—it gets you in the spirit and it’s just helped it be more meaningful to me,” says Crookston.

Kitchen is confident the run’s message will bring remembrance to freedom in a way that would make the Founding Fathers of the United States proud.

“It’s really a day to remember. We know in the gospel and by virtue of the words that are in [the] sacrament prayers the importance of [remembering] important things and doing that on a regular basis. If we don’t do it, we lose it,” says Kitchen. “I think that this what we’re doing with Parley P. Pratt: we’re gathering Israel by using this jail break story of 1839 to bring a message of hope, unity, and freedom, and celebrating freedom in a way our Founding Fathers may have hoped such a holiday would be.”