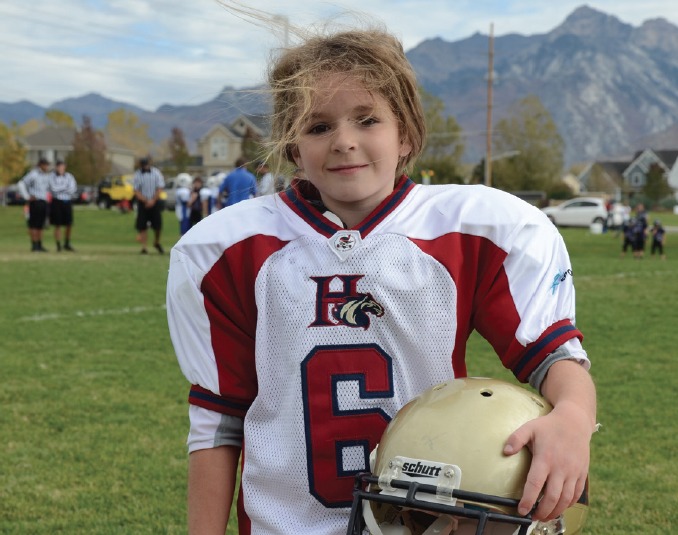 Sam “Sweet Feet” Gordon wasn’t an overnight sensation—her rise to fame was much faster than that. “She posted her story in the morning before leaving for school, and three hours later, The Ellen [DeGeneres] Show called, and the next day, Good Morning America had a camera crew at our home,” her father, Brent Gordon, says.

Since her football highlights went viral, Sam has been interviewed twice on Good Morning America. She’s been on ESPN’s SportsCenter. The mayor of South Jordan, Utah, even named December 18th “Sam Gordon Day.” She was honored at a Utah Jazz game. And she even appeared on her own Wheaties box (the first female football player ever to be pictured on one). The list goes on and on.

So what makes Sam so special? Sam isn’t just the only girl on her football team— but she can outrun almost anyone. Her speed earned her the nickname “Sweet Feet” and launched her into stardom.

Sam, whose family are members of the Church, has always played sports with her older brother, Max. When he started playing tackle football, she wanted to run the speed drills on the side of the field. “At first, Max tried to get her to stop because he was embarrassed that she was beating most of the players on his team,” Gordon says. “But then his coach included Sam in the drills and issued a challenge to the team: ‘Beat Gordon’s sister!’”

This is where Sam’s story began.

“After Sam finished running drills with the team one day, Max’s coach talked with her and told her he thought she could be a great football player,” Gordon says. “It was at that moment she wanted to play tackle football.”

Over the next few months, Sam trained for tryouts with her brother and her agility coach.

She was hoping to land a spot on one of the two A teams with the best players in the league. The coaches were all impressed with Sam because of her speed and natural skill. For a brief moment, it looked like she was going to get her wish—at tryouts, the A2 coach asked her if she wanted to be his quarterback. But when the draft was over, Sam found out she had been picked for the B5 team.  At first, Sam was crushed. She felt she had performed well at the tryouts, and she started questioning whether she had played as well as she thought she did. But speaking with her new coach, Chris Staib, lifted her spirits. Staib told her she was his number one pick after his own son—he was impressed with her performance during the running drills, and he knew she would play well. “I’m glad I ended up with a coach who believed in me even though I’m a girl,” Sam says. “I wouldn’t have chosen the B5 team at the time, but now I wouldn’t change anything.”

Staib made Sam one of the three team captains. As captain, it was her job to be a role model and make sure everyone was having a good experience. This proved to be the perfect role for Sam. Once, she noticed a boy on the team was feeling down because he believed he was the worst player on the team. Sam asked him to take her place as captain for the day. “He played his best game that day!” she says.

Sam’s first football game was only the beginning of an impressive season. “I scored a touchdown on my very first play ever in my very first game, and I ended up scoring four more times that game on only eight carries,” she shares. Although she was center of her team’s offense, she really liked playing defense because she liked tackling the other players. “I would hit them as hard as I could,” she says. “It was fun!”

Sam’s father didn’t worry about his daughter playing football because she grew up playing sports with her brothers who didn't go easy on her just because she was a girl. “My family would play touch football at the park with kids from the neighborhood. I was hard to catch, so I think they were pretty happy that I wanted to play because they thought I would be really good,” Sam says.

It was also important to Gordon that Sam play sports because he believes sports are a good way to learn important life lessons and skills, like teamwork, respecting coaches, and overcoming challenges.

And overcoming challenges is exactly what Sam did. Although football is seen as a “boy sport,” Gordon didn’t see this as a reason why Sam shouldn’t play. “I think that all sports were, at one time, considered ‘boy sports’ until women and girls started playing too,” he says.

At first, Sam’s neighbor Ari Bruening didn’t understand how someone could become so famous in a matter of days—then he saw her video. At the suggestion of his wife, Bruening contacted Sam about sharing her story in the form of a book. “Ari is our home teacher and family friend, and he said, ‘Sam, I want to write books for young readers, and I think you have a great story. Can we write a book together?’” Sam continues, “So Ari would come over to my house, we’d get some drinks and snacks, and sit down at my kitchen table and work on it.”

Bruening says he hopes the book inspires people to go after their dreams. “I have daughters of my own, and I realized that her story was not just about football; it’s about girls being able to exceed all expectations and overcome gender barriers,” Bruening explains. “But it’s even bigger than that: it’s about everyone, male or female, being able to do whatever you put your mind to.”

Sam is a football phenomenon and an author—and she’s only 11. She’s had experiences some people wouldn’t even dream of. By far, her favorite was at the Super Bowl. “Going to the Super Bowl as the special guest of Roger Goodell, the NFL Commissioner, was really exciting!” Sam shares. The commissioner introduced her to reporters at his press conference, and she also did a skit with the commissioner and Alec Baldwin. She met Steve Young and his family at a VIP party before the game. “I got to sit by the commissioner in his suite during the game, and I was in a Super Bowl commercial watched by over 100 million people. That was an awesome weekend!” Sam says.

It would be easy for her to think this experience is all about her. “But,” she says, “I don’t think my story is just about me. It’s about what we can accomplish even when other people think we can’t.”

Children always have big goals for their futures. It’s not unrealistic for boys to dream of being professional football players or president of the United States because they have role models who show them their dreams are possible. “I want all girls to believe that they are really great and can do great things if they set high goals and work hard,” says Sam. “I hope my story will inspire girls to have big dreams, too.”

Sam’s story is so inspirational because she didn’t let being a girl stop her from chasing her dreams—she wanted to play football, so she played football. She says she wants people to hear her story and not be afraid to accomplish their dreams—as impossible as they may seem. But the most important thing she wants people to learn from her experience is this: “Little girls can do big things!”

Check out her sweet video highlights: