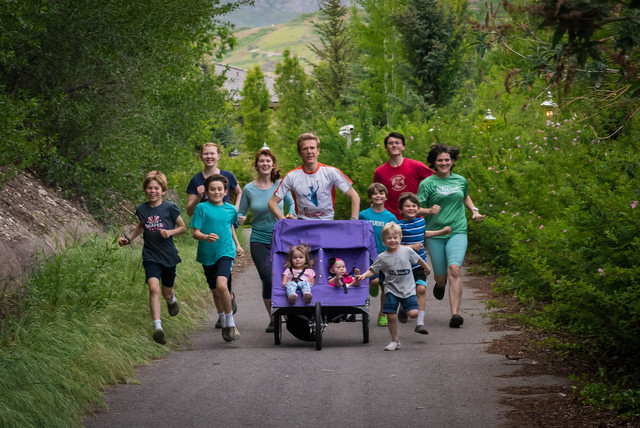 Avid runner Benjamin Pachev gets a lot of looks when he shows up at starting lines—particularly looks directed at his feet.

That's because this LDS 18-year-old, and much of his family, don't run in Nike, Brooks, or any another typical running footwear.

"Crocs are a great conversation starter," Benjamin jokes. "People will come up and ask, 'How did you do that in Crocs?'"

Nine of Benjamin's 10 siblings wear Crocs when they run together in the mornings as well as race together (the youngest sibling, who is not quite 1 year old, does not run yet). With the most expensive pair the family typically buys costing around $20, these shoes are a good thing for this family of 12.

"The economy is really not structured toward large families," Benjamin's father, Sasha Pachev, says. "You have to think of creative solutions to problems."

Benjamin says his sister began the family trend when she insisted on wearing the rubber clogs on a family run in 2009. Though reluctant at first, Benjamin says his father agreed and let a few other children wear Crocs as well. After noticing the Crocs not only stayed on during these runs but seemed to improve his children's running form, Benjamin's father began running in Crocs himself, as did most of his family. To this day, every runner in Benjamin's family wears Crocs. The only reported difficulties Benjamin notes are on wet or grassy surfaces where it's difficult to find traction.

"During one 5k I ran it was snowing; my whole family runs 5ks, and we didn't think it was going to snow and, yeah, we didn't get good times," he says.

But their footwear doesn't seem to hold them back. Benjamin recently placed 16th overall in the OneAmerica 500 Festival Mini-Marathon with a time of 1:11:53 and his father wasn't far behind, finishing with a time of 1:17:26. And that wasn't even Benjamin's fastest half marathon time, having completed the 2015 Haunted Half in Provo, Utah, with a time of 1:09:11.

This kind of success hasn't gone unnoticed. The LDS teen and his family are gaining national attention, with articles like those by Sports Illustrated and Runner's World featuring the family and their footwear. Crocs even sent out this tweet to Benjamin after his mini-marathon race.

WE NEED YOUR HELP. We're looking to get ahold of Benjamin and reward his feat (& feet). Help us #FindBenjaminhttps://t.co/SqccazDIAu— Crocs Shoes (@Crocs) May 10, 2017

But Benjamin probably won't be gaining much attention for his choice of footwear for a while, well, specifically for two years.

Having already obtained a bachelor's degree in applied mathematics from BYU last December, Benjamin left for his mission on May 22 at a point when most teenagers move out for college.

And Benjamin, who runs 10 miles every day except for Sundays, says he plans on using his Crocs to run circles around his companions—literally.

"I actually expect that most of my companions won't be runners," Benjamin says. "And so what I want on my mission is to run back and forth and stay at the side of my companion as they do their form of exercise because if my companion isn't a runner, it would not be healthy for them to try to run with me."

And when he gets back from his mission, Benjamin says he plans to improve his half-marathon and marathon times so that he can meet Olympic trials times—all while wearing Crocs.

But as Benjamin points out, it's the runner's form, not the shoe, that matters most.

"If I were to put on Nike athletic shoes, I don't think I'd run much faster," he says. "I don't think Crocs are for everyone because Crocs could cause injury to some people. I'd recommend that people give it a try and run a mile in Crocs and see how they feel, see if they like it."