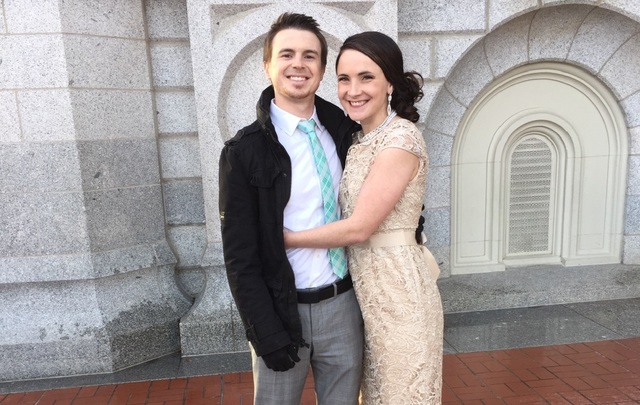 Six months ago, becoming pregnant wasn't even a possibility in Mindy Catmull's mind. It just wasn't possible, not with her condition...or was it?

About 10 years ago, Mindy, then Mindy Shaw, thought Luke Catmull would always be the cute, older boy in her neighborhood who wouldn’t really notice her. Yet, when Luke returned from serving a mission, Mindy, then 18 years old, sent a message to him on Facebook asking if he wanted to hang out.

Their relationship grew from hanging out to dates until eventually Luke asked Mindy to be sealed for eternity with him. While they were still engaged, Mindy’s father pulled Luke aside and asked the typical things a future father-in-law might ask, except for one thing: What was Luke’s plan for health insurance?

The question wasn’t odd to Luke. In fact, he was expecting it, because, on their third date, Mindy had told Luke she had a genetic, terminal illness.

Since early childhood, Mindy knew she had cystic fibrosis (CF). A disease where thick mucus builds in the lung, pancreas, and other organs, those with CF have an increased chance of infection and damage to internal organs. Because of the damage caused to the lungs and other organs of the body, the current life expectancy of those with CF is the late 40s. It is also difficult for women with CF to conceive because of mucus lining the cervix.

"In my patriarchal blessing, it didn't say anything about being a mom," Mindy said. "So I was always afraid I wasn't going to be one, even when I was little."

But as Mindy began her family with Luke, she became determined to have children of her own despite her illness.