If one were to pass by 14-year-old Ingrid Ochoa's bedroom on any given day, they probably would hear the distinct clicking of a typewriter.

Why a typewriter? Well, Ochoa's school in Honduras required students to learn how to type on typewriters. But that's where the mundane part of Ochoa's story stops. Because in her room at her desk with her typewriter, Ochoa was creating fantastical worlds—worlds where rigorous class work and day-to-day life was swept away as imagination and creativity took over.

At the time, this spinning of worlds with imagination and black ink was just an escape. But eventually, Ochoa's stories would reach millions of people thanks to some help from friends and an unfortunate breakup.

Ochoa spent most of her childhood in the typically arid state of Nuevo León, Mexico, in the city of Monterrey. And even from an early age it was very clear that while Ochoa may be physically present, her mind was often elsewhere.

“I have always been a daydreamer,” Ochoa says. “I've always been thinking of stories in my head, and I would go to places and be there but not be there.”

But Ochoa's constant daydreaming wasn't fruitless. At about 12 or 13 years old, Ochoa was already working on her first story. Inspired by the fantasy trilogy The Lord of the Rings, Ochoa began writing a story of elves and their immortality.

“I still want to produce [that story],” Ochoa says fondly when she talks about her first attempts at story writing. But even as Ochoa began capturing her daydreams on paper, she knew there still was something missing. Words were somehow not enough to express all that she wanted to her stories to tell. 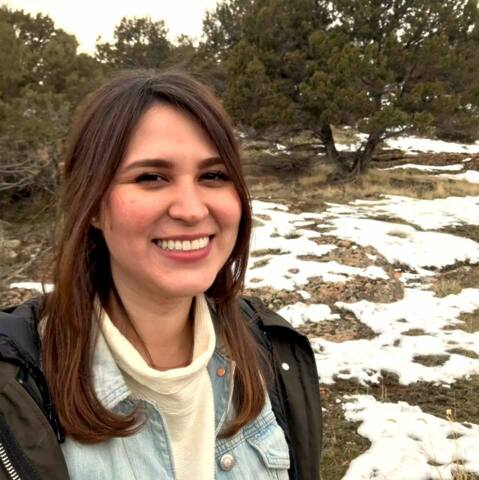 But before she could determine what that was, Ochoa and her family moved to Honduras when her father, Elder Adrián Ochoa, was called as the San Pedro Sula Mission President. It was during that time that Ochoa really began to seek an escape from the challenging course work she faced in school through her stories.

And fortunately, her new school provided the perfect, although unintended, solution.

“I would write on a typewriter for summer because we had to learn how to type. And I was the fastest one in my class,” Ochoa says. She wrote “thick stories” on that typewriter and soon the stories became something others wanted in on. “But all my classmates would pass it around and read it and then I would bring them the next chapter and the next chapter.”

It was when Ochoa was 17 that she discovered what had been missing from her stories. All this time, the answer had been right there: Ochoa could draw. Instead of relying solely on words to paint the scenes of her imagination, she began to create comic-like stories she would upload on websites where readers from all over the world could read them.

A handful of people did consistently comment on Ochoa's work, and she kept uploading her comics one chapter at a time until she left to her to serve a mission in Taiwan, Taipei. However, it was while in the Missionary Training Center that she realized she would have to put a short pause on constant daydreaming. 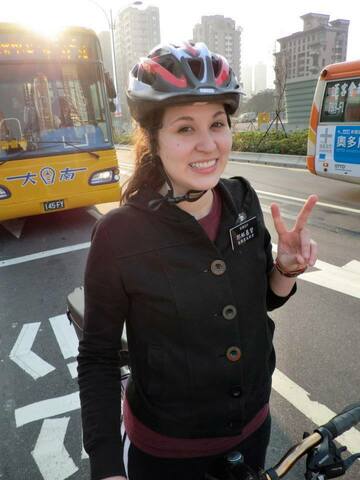 “When I got to the MTC, I was like, ‘No, I need to focus and I need to be where I am,’” Ochoa remembers. “And so I programmed my brain to work completely different. My whole mission I wasn't a story writer anymore.”

And so when Ochoa returned from her mission and moved to Utah, she didn't think about creating new stories at first. But then something changed that. After a breakup, Ochoa began to seek that familiar escape of daydreaming and story creation.

All of the emotions of this breakup caused Ochoa to become inspired once again. But instead of thinking of a story of pure fantasy, Ochoa began creating of a story based on events and people from own life. A story about an 18-year-old girl who had yet to have her first kiss.

“It felt too personal for me to share,” Ochoa says of the story that was forming in her mind. It was, after all, based on her life. The premise, a girl makes a bet with her best friend to kiss a stranger and then finds herself falling for three different boys, wasn't all made up. Ochoa could change names and keep the setting ambiguous, but there wasn't much of a buffer to separate fact from fiction. 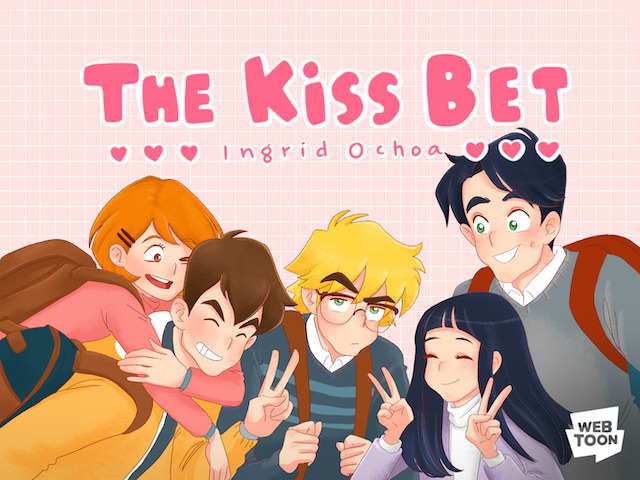 But, despite feelings of trepidation, Ochoa began uploading weekly comic chapters of her new story, The Kiss Bet, to a website called WebToon Canvas. As just one of many comic writers uploading their work to this site, Ochoa had no idea how big her story was about to become.

And after Ochoa's friend Vickie (who also is the inspiration for a character with the same name in The Kiss Bet) found out about the comic series and shared it on Instagram, it became impossible for Ochoa to keep The Kiss Bet a secret any longer. And suddenly, Ochoa's worst fears came true. All the people her comic was based on were reading it.

“And they're like, ‘This is me, isn't it? And this is me.’ And I was like, ‘Oh, no. I've been discovered,’” Ochoa says with a laugh. While this discovery could have sent Ochoa in a spiral of embarrassment, it only pushed her to write more. With her friends now supporting her and her secret out, Ochoa found new inspiration to keep going where she might have stopped before. 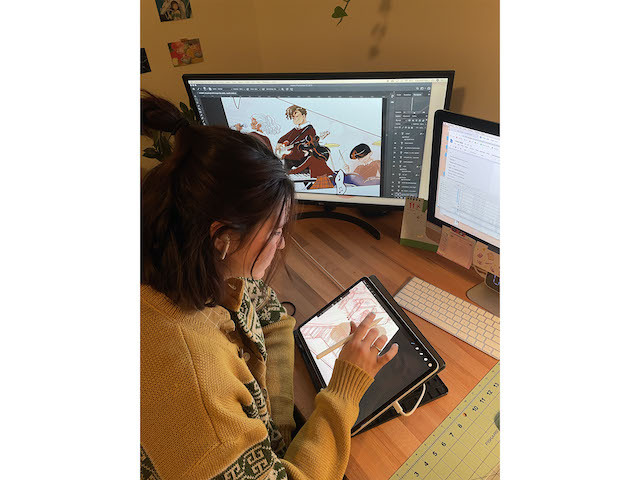 In fact, at this time, Ochoa set a goal for This Kiss Bet to rise to be featured as a WebToon original, which would make her work far more accessible to even more readers. Ochoa quit her job working at the Missionary Training Center and began writing full-time while taking gigs to illustrate children's books on the side.

But all this work wasn't especially lucrative at first. And when Ochoa's parents moved to Utah during this time, they became concerned about their daughter's financial future.

“And they're like, ‘What are you doing with your life?’” Ochoa says. “‘You're just drawing all day long, you don't have a real job, you're getting like little gigs here and there.’ And I wasn't asking my parents for money, but they saw that I was struggling. And they're like, ‘No, you're going to find a real adult job.’ My parents have always been very supportive of my work, but I think they got scared because of the situation I was in.”

Eventually, Ochoa was hired onto the Church's executive communication department where she helped illustrate presentations for General Authorities and Church leaders. But during her first week working for the Church, she received an email from her editor letting her know that WebToon would like to make The Kiss Bet a featured story on their website.

With that, Ochoa knew there was no way she was going to give up on The Kiss Bet. And so, from 9:00 a.m. to 5:00 p.m., Ochoa worked her full-time job. When she got home, she wrote and illustrated The Kiss Bet until 3:00 a.m. before going to bed, and starting the process all over again the next day.

Working two full-time jobs became a grueling, repetitive cycle with not much room for anything else.

“I was at the lowest of the low at one point because I was working both jobs, and I felt really, really lost,” Ochoa says.

However, Ochoa's dedication was paying off. During this time, The Kiss Bet skyrocketed in popularity, gaining more than four million weekly readers, leaving Ochoa with a decision to make: should she quit her stable job working with the Church's communication department to pursue her dream job of writing comics full-time? 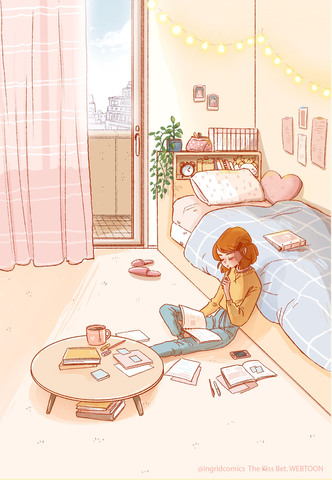 It was a decision that Ochoa knew she would need help making.

“I did a fast and my friends all joined to fast with me, and it was a very spiritual experience,” Ochoa says. “And after I did this fast, my dad calls me immediately and he tells me, ‘You know, I think you can do this. I trust you.’ And I was like, ‘What? Are you sure?’ He's like, ‘We will help you . . . we got you. . . .’ And my whole family was backing me up with it. . . . And I remember praying to Heavenly Father and being like, ‘You couldn't have made it any clearer for me.’”

Still, even after making a decision to focus on her writing, the worldwide pandemic has presented new challenges for Ochoa and many creatives. As the virus has spread throughout the world, it's leaving many, including Ochoa, with little to no social interaction. In this new reality, Ochoa says she struggles to find inspiration for her story at times.

“But Heavenly Father has been a huge guide,” Ochoa says. “He's not going to make me quit my dream job if He knows that it's something that I love and brings me so much passion. . . . And I also realized that I want my story to be clean, family content for anybody to enjoy and there's not a lot of stuff [like that] out there at the moment. …And I think Heavenly Father trusted me that he wanted to help me with that. So He wants us to do what we love.”

And so Ochoa continues to write and illustrate her comic, bringing her mix of imagination and real-life experience to millions from all over the world.

“I think this is my calling,” Ochoa says. “I always am thinking of the next story and the next story. I think now that I have an audience that wants to listen to me, I think I'll keep entertaining them.”