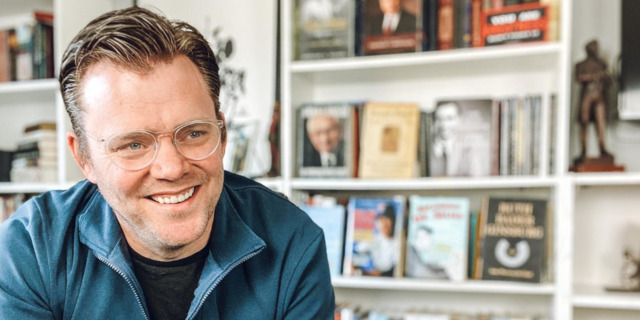 During the past months being separated from so many, I felt like the world placed me in an unwanted solitude with feelings of stress, anxiety, and above all loneliness. Taking into account the additional challenge of managing children, working from home has felt more like living at work rather than convenience. Being away from my friends, colleagues, and fellow church members has brought up feelings of loneliness and isolation that I simply wasn’t prepared to handle.

In July, our family’s Come, Follow Me home study was centered on the book of Alma. Through my years as a convert, I must have read Alma's conversion story hundreds of times. This time, however, was very different.

Alma 36:10 says, “And it came to pass that I fell to the earth; and it was for the space of three days and three nights that I could not open my mouth, neither had I the use of my limbs.”

Immediately, I felt the prompting of the Spirit give me an impression that Alma’s solitude was something we all experience in different ways, especially today. I realized Alma’s small period of time shut off from communicating with others was designed by God in order for Alma to learn something about Alma. It was in many ways the solitude that brought Alma closer to Christ.

One of the great principles of the gospel is found in Doctrine and Covenants 52:14 where the Lord reminds us that He works in patterns. We will find examples of Heavenly Father’s work repeating itself in scriptures, nature, and in life when we take the time to look. I often have the Spirit testify to me the truthfulness of something when I recognize it as a pattern of God.

► You may also like: Elder Holland on taking the time to be alone like the Savior did

After reflecting on my spiritual prompting about solitude, I began to study the scriptures and discovered patterns in this type of aloneness and how it can bring someone closer to Christ. There are many examples to highlight, but here are a few:

One of the first stories I learned from the Bible was the story of Moses. His story of struggle, leadership, and having to rise above his station when the Lord called him to something special was something I connected with even at a young age. I had very little exposure to the gospel as a convert, yet Moses’s journey planted seeds of faith in me long before I knew there was anything there.

After the Exodus from Egypt, the children of Israel were all asked to live together in the wilderness. This trial alone seems daunting. I can only imagine how tired and frustrated not only the children of Israel must have felt, but how exhausted Moses must have been after leading them there. Soon, the Lord commands Moses to come up unto the mountain alone (Exodus 24:12). It's very clear that Moses had to be alone to find God amidst the noise and exhaustion he and the children of Israel were experiencing every day. Through this moment of solitude, God was able to speak to Moses and provide some of the most influential commandments in the history of mankind. Moses stays in this solitude on the mountain for 40 days and 40 nights (a pattern similar to Christ’s fast for 40 days and nights in the New Testament) and is given the Ten Commandments, which would shape civilization even unto today.

Like Moses, Nephi was in the wilderness with those he was closest to. Living as a family in their own isolation would be very challenging; every member had to do their part in order to survive. Yet, what did the Liahona show Nephi to do? In 1 Nephi 16:30 and 1 Nephi 17:7, Nephi tells us that he went unto the mountain alone “according to the directions which were given upon the ball.”

It was in this solitude on the mountain that Nephi was given the opportunity to not only talk with God but to be given personal direction. He was commanded to build a ship, which could have seemed impossible for anyone—let alone for Nephi when his family would have had limited resources at the time. But as Nephi seems to be having doubts as to his own ability to complete the task ahead of him (1 Nephi 17:9), the Lord comforts him, saying, “I will be your light in the wilderness; and I will prepare the way before you” (1 Nephi 17:13).  Learning to trust God when we are asked to do hard things can be one of the most challenging tests of faith in a person’s life.

The solitude Nephi found on the mountain helped him not only recognize universal love and support from God but gave him the strength to do difficult things.

The Prophet Joseph Smith had plenty of his own isolative moments. Not only was he alone when he experienced the First Vision, he was alone when the angel Moroni visited him and when he finally received the gold plates. Although future critics of the Church would call out these as convenient coincidences, God’s pattern couldn’t be clearer. These are not coincidences. Later in the Prophet’s life, Joseph found himself in unwanted solitude at Liberty Jail. You can hear Joseph’s feelings of aloneness in the opening verse of Doctrine and Covenants 121:1 when he writes, “O God, where art thou?”

Many can relate to that feeling of unwanted solitude, passionately wondering why we feel so alone. It was in Liberty Jail amidst that solitude that Joseph received a reminder from God of how comforting His love can be: “My son, peace be unto thy soul; thine adversity and thine afflictions shall be but a small moment” (Doctrine and Covenants 121:7). I’ve read that verse many times and felt comfort in the reminder of not only how important solitude is but how with God all things are possible.

The solitude in Joseph Smith’s life provided him the opportunities to receive special blessings from God.

My last example comes from the greatest exemplar of them all, our Savior Jesus Christ. Here are five times in His ministry He chose solitude for specific reasons:

Through these examples, we learn that solitude helps us navigate our trials because it provides the opportunity for God to speak directly to our heart.

It was after this study that I realized what a precious gift I've been given by feeling forced to be alone. Though at times distressful, my unwanted solitude has also been my opportunity to become closer to God. Aloneness can be very different when you approach it from an eternal perspective. Approaching quarantine as an opportunity for solitude reflects the pattern I discovered in the scriptures over and over again.

This renewed appreciation for solitude has helped me understand something I read earlier in Come, Follow Me, but with a different perspective:

“Yes, the journey back to Heavenly Father is personal and individual, and no one can keep our covenants for us, but that doesn’t mean we are alone. We need each other. As members of Christ’s Church, we covenant to serve God by helping and serving one another along the way, “bear[ing] one another’s burdens” (Come, Follow Me, Mosiah 18-24).

We aren't alone even though recent challenges may have separated us. We need each other. Being alone is part of God's plan, pattern, and process. In many ways, it demonstrates His love. These things prepare us to bear one another's burdens as true disciples of Jesus Christ.