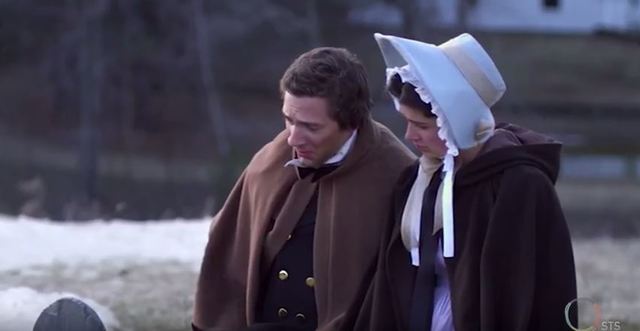 Lindsay Farr Harper, known for her portrayal of Emma Smith in the movie Joseph Smith: Plates of Gold, recently shared her experiences and testimony in a segment of Splitting the Sky, a YouTube documentary series that aims to share authentic stories of faithful women.

Lindsay was asked to play Emma Smith the same week she had originally planned to submit her mission papers. She received a clear prompting that she was not supposed to serve a mission at that time because of the movie opportunity. This was an answer she initially struggled to accept. She had been preparing to serve for a long time, and she worried that people might judge her or assume that she gave up a mission to pursue fame or recognition. “I gave up a mission because God told me to. I think it was an experience where the Lord wanted me to realize that His time and His will [are] always better than ours,” Lindsay says.

This was Lindsay’s film debut, and she worried she wouldn’t be able to adequately portray Emma’s story. She found peace as she trusted in the Lord to help her understand and share Emma's perspective:

“It became a lot easier when I stopped thinking about acting and I started feeling as Emma would,” Lindsay shared. “I came to find that the Lord is more than willing to offer us glimpses of other people’s lives if we ask Him.”

She was particularly worried about the birthing scene in the film and prayed for help to be able to feel some small portion of what Emma might have experienced when she lost her first child, Alvin. “I remembered feeling this overwhelming, all-consuming, deep sense of loss that I just couldn’t shake,” Lindsay says. She feels that God helped her to deeply connect with Emma during this time.

As filming for the movie concluded, Lindsay felt that God wanted her to serve a mission. She served in Hong Kong and met her husband, Blake, soon after she returned. Their first child was born last December.

In the video, Lindsay shared her experiences with postpartum depression. She felt that her experiences playing Emma in Joseph Smith: Plates of Gold truly helped her to find strength and perspective through this trial:

“I was so scared that if people found out that I was struggling, they would think I was a bad mom,” says Lindsay. “But just having a small glimpse of Emma’s experiences was enough to make me realize that we are not to judge. I realize now that I think I was given a glimpse of that experience to be able to empathize with others. Human experience is powerful. As we come to feel what others feel, we are able to love and welcome and heal as the Savior does.”