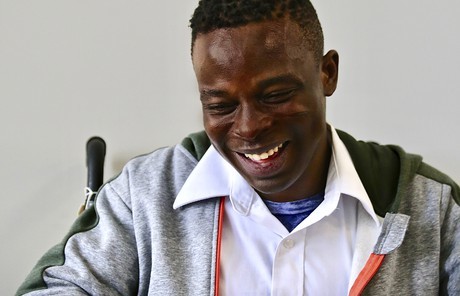 “I see God in everything,” Eric Ayala says. “I don’t want anyone to think the way Heavenly Father has blessed me is identical to how He will bless them. But He will bless those who trust Him. When you have to deal with hard things, pray and trust God.”

When 21-year-old Eric Ayala of Techiman, Ghana, was 3, he and his mother were at a street-side market when a car veered out of control and struck them.

“It hit my mother first and broke her leg,” Eric says. “Then it dragged me a long way before my body rolled into the gutter. I was pronounced dead and taken to a mortuary. The mortician was preparing my body when he discovered I was still alive. I was rushed to a hospital.”

Now paraplegic, Eric faced challenge after challenge as he grew up without the use of his legs. He eventually obtained leg braces that allowed him to stand, but he soon outgrew them and couldn’t afford replacements. He was given a small wheelchair, but outgrew that too. His legs withered, sometimes shaking with spasms, and his feet became deformed.

In Ghana, those with disabilities are often considered a burden. Eric’s family had little money, not enough to pay for medical treatment. When Eric was about 10, he developed pressure sores caused by lack of movement and by sitting on wood and concrete. The sores festered, oozing constantly, and they smelled terrible.