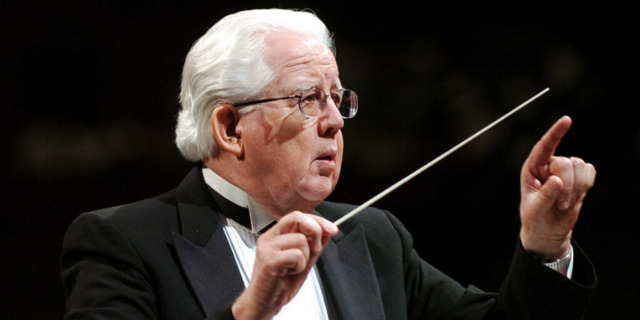 For nearly a quarter of a century, from 1974–1999, Jerold Ottley directed The Tabernacle Choir from its home on Temple Square. His tenure at the Choir included 1,300 Music & the Spoken Word broadcasts, 30 commercial recordings, more than 20 major tours around the world, and thousands of rehearsals and performances. Ottley died on Friday, February 19, 2021, in Salt Lake City. He was 86.

Easily recognized by his distinguished head of white hair and what Choir members described as “his beautiful hands,” Ottley was revered by those who sang with him, worked with him, and observed his dedication to making the Choir ever better.

Choir President Ron Jarrett, who sang in the Choir as a tenor under Ottley’s hand, said: “The Choir would not be what it is today without Jerold Ottley’s contributions for a quarter of a century. He was a visionary who put in place protocols that refined the Choir organization and ensured its future success.”

Ottley’s imprint on the Choir reflected his deep spiritual roots, his professional musical abilities, and his organizational acumen. Choir Director Mack Wilberg appreciated the groundwork put in place for musical excellence saying: “Jerold Ottley was not only a wonderful musician but a great person who, like those before him, laid a foundation for today’s Choir. His legacy is a gold thread in the tapestry of the Choir’s past, present, and future.”

Working closely with Choir advisers and under the direction of The Church of Jesus Christ of Latter-day Saints President Spencer W. Kimball, Ottley developed a professional sound for the all-volunteer choir, emphasizing music fundamentals, including harmony, diction, and pitch. After the Choir performed under Ottley’s baton at President Ronald Reagan’s inaugural in 1981, Reagan dubbed it “America’s Choir.” The name stuck.

In addition to his musical talent, Ottley had a gift for organization. He put in place major changes to the Choir’s operation including a retirement policy, attendance policy, structured audition procedures, and seating arrangements. After his formal retirement in 1999, Ottley and his wife noted soprano JoAnn Ottley became volunteers and directed the newly created Choir Training School to prepare new members for the rigors of music performance. Adding to his long list of accomplishments, he also revised the choral library database for the Choir’s more than 800,000 pieces of sheet music.

Born April 7, 1934, in Murray, Utah to Sidney and Alice Ottley, he began his work with the Choir as a part-time assistant director until he became the 13th music director, succeeding Jay Welch. He served under two Choir presidents, Oakley Evans and Wendell Smoot.

Funeral arrangements will be announced later.