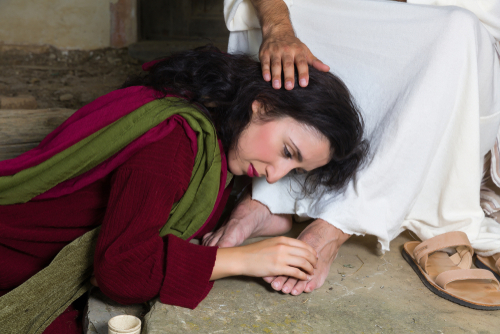 Christ and Women: 4 Powerful Moments from the New Testament

In a bold disregard for male superiority, the Savior was not ashamed to describe Himself by using feminine images. He is the mother hen yearning to protect her own under her ample wings if they will come to Him in faith (Matthew 23:37; Luke 13:37), and the woman who searched her house until she found the lost coin (Luke 15:8–10). He invited all who were thirsty to come to Him and drink from His koilia (John 7:37–38), an interesting but debated image. The term refers to a “hollow of the body” and is typically translated as “belly” or “womb.”

Consistently, the New Testament portrays women as abundantly capable of understanding doctrine, receiving revelation through the Spirit, and nurturing testimony in others. And they were intricately involved in the most significant moments of Christ’s mortal ministry. Here are four powerful moments shared between Jesus and women as recorded in the New Testament.

1. Jesus’s First Declaration that He Was the Messiah

In John’s record, the Savior first confirmed to an unnamed woman in Samaria that He was the Christ. Jesus seemed to orchestrate His timing and route to encounter this woman at the well, traveling right through the middle of Samaria rather than taking the alternate route through the Jordan Valley. He met her before she had even heard of Him. She saw only a thirsty man sitting at the well.

In leading their discussion, Jesus created an environment that enabled the woman to learn His identity. Learning truth necessitates the tutelage of the Holy Ghost, whose mission is not to speak of himself but to bear witness of Christ and guide us to the truth (John 16:13). That is precisely what the Holy Ghost did for the woman at the well. She carefully listened to Jesus, but it was the Holy Ghost who revealed the messianic thread throughout His teachings. Once taught by the Spirit, she began to put it all together and professed, “I know that Messias cometh, which is called Christ: when he is come, he will tell us all things” (John 4:25).

Then, and only then, did Jesus unequivocally declare Himself the Messiah. The King James Bible records the Savior’s response as “I that speak unto thee am he,” (John 4:26). As soon as the woman received the confirming witness, she “left her water pot, and went her way into the city, and saith to the men, Come, see a man, which told me all things that I ever did: is not this the Christ?” (John 4:28–29).

Much can be learned from the fact that Jesus selected a marginalized Samaritan woman to learn truth from the Spirit and proclaim that truth to others by the same Spirit. In nearly every way she is an anomaly among the recipients of revelation. The woman at the well was a woman and a Samaritan, a double reason to be labeled unclean by the Jews. With her unsavory past, she would have received no respect in any community. This woman, who does not even have a name in our scriptures, opened her mind and heart to be spiritually taught. She who had neither title, nor position, nor formal education, nor a stainless past could see the thirsty stranger as He truly was: the Savior and Redeemer of the world.

Life-changing revelation came to her, revelation as profound as we find in scripture. But her conversion was not in the dramatic fashion of Alma the Younger or Saul on the road to Damascus. In a quiet and contemplative way, the Samaritan woman received a clear witness while in the midst of doing ordinary household chores. In her humble way, she encourages any who feel disenfranchised to trust in the Lord’s invitation to drink from His living water and experience His love and power to save them.

In a unique way, Martha’s sister, Mary, accepted the Savior’s need to give His life and so anointed Him in preparation for his death while other disciples attempted to prevent it.

Mary spent her resources to anoint Jesus with spikenard, “a fragrant oil derived from the root and spike (hair stem) of the nard plant, which grows in the mountains of northern India.” The spikenard she selected cost about 300 denarii (John 12:5; Mark 14:5). Assuming one denarius was payment for a day’s labor (Matthew 20:2) and 200 denarii could provide a meal for 5,000 men (Mark 6:37, 44), Mary’s offering represented nearly a year’s wages.

According to Mark, Mary presented an alabaster “box,” also referred to as a vial or cruse, of pure, undiluted spikenard to anoint Christ’s head in acknowledgment of his impending death and subsequent anointing with spices. Alabaster is a translucent stone that can be carved to create beautiful containers. While not uncommon in the ancient Near East, alabaster was nonetheless obtained only at considerable cost.

In John’s account, Mary took some oil to anoint Jesus’ feet. She then dried his feet with her hair, which in effect allowed her head to be anointed by Jesus. In antiquity, one anointed the head of a live person and the feet of a corpse. In other words, this was the anointing that one would typically receive at one’s burial.

Judas complained sanctimoniously about Mary’s extravagance. It is ironic that he who would betray Jesus to the Jewish leaders in the next day or so for 30 pieces of silver, estimated at 100 denarii, complained at Mary’s use of a precious perfume to reverence the Savior. Impervious to Judas’s complaints, Jesus refused to rebuke Mary and instead defended her, received her act of discipleship, and extolled her actions as prophetic. “Let her alone: for she hath preserved this ointment until now, that she might anoint me in token of my burial. For the poor always ye have with you; but me ye have not always” (JST, John 12:7–8).

Mark and Matthew observe yet another manifestation of the Savior’s respect for Mary’s service. Speaking to those disciples in attendance, Jesus emphasized Mary’s influence on future generations because of her openness to revelation before his death: “[Mary] hath done what she could: and this which she has done unto me, shall be had in remembrance in generations to come, wheresoever my gospel shall be preached; for verily she has come beforehand to anoint my body to the burying” (JST, Mark 14:8; Matthew 26:12–13).

According to Jesus, Mary’s actions underscore her early understanding and support for the Savior’s mission to die that all might live. Her choice of service to Jesus, reverently focusing on his feet, indicates that she knew he was to die and would live again. And just as the pleasant fragrance of the perfume filled the house, so the power of the gospel of Jesus Christ spread through the world to bring deeper understanding to those who loved and followed the Master.

► You'll also like: 3 Remarkable Women You Won't Want to Overlook in the Old Testament This Year

Although the women of Galilee are not mentioned between the description of their miracles of healing and the Passion narratives, their support and love for Jesus was ongoing. Jesus was sentenced to die by crucifixion, a most shameful punishment in the eyes of Jews and Romans, which would have kept those concerned with their reputations away from the scene. Yet here was a significant group of women who appeared uninterested in what anyone else thought of them or of any danger to which such devotion might expose them. It was the women who remained near Him and with Him through His death and burial who give an extraordinary show of genuine love and support. Luke initially identifies them as “the women that followed him from Galilee” (Luke 23:49) but later specifies some of them as “Mary Magdalene, and Joanna, and Mary the mother of James, and other women that were with them” (Luke 24:10). By contrast, in their confusion and fear, the male disciples “forsook him, and fled” (Matthew 26:56; Mark 14:50).

Two men are later identified in their lament and support for Jesus, namely Nicodemus and Joseph of Arimathaea. They had the political clout to secure the body of Jesus and ensure his body a proper burial. But it was this undefined company of women who were always in the wings, looking for a way to help, seeking for solace in their profound grief of love for the crucified One. Because the burial ceremony could not occur until after the Sabbath, the women watched “how his body was laid” and prepared spices and oil for anointing the body for a more fitting burial later (Luke 23:55–56). The last thing Jesus is recorded as saying before his Passion, “Watch” (Mark 13:37), is exactly what the women did. They were accustomed to caring for Jesus in life and were not going to abandon him in death.

4.  Jesus’s First Appearance After the Resurrection

In the crowning moment of His ministry, the Redeemer showed Himself as the first fruits of the Resurrection to Mary Magdalene and at least one other woman. Even though John identifies only Mary Magdalene at the scene of the empty tomb (John 20:1), in her report to the Apostles, she states, “We know not where” He is, implying that at least one other person accompanied her in making the initial discovery, as Matthew, Mark, and Luke report.

Prepared to anoint the dead body of Jesus for whom she still mourned, Mary and perhaps other Galilean women were confused when they looked into the empty tomb. When the two angels at the tomb told them that Jesus was not there but had risen and that they must tell the Apostles what they had learned, Mary was eager to obey.

After Peter and another disciple saw for themselves that Mary’s report was true, they “believed,” or were convinced, of Mary’s witness and quickly departed again. Mary remained at the empty tomb, seemingly determined not to depart until she learned what had happened to the body of Jesus. She continued vigilant, ever loyal.

Mary Magdalene did not recognize the Savior when he first appeared and spoke to her, calling her by the nonspecific term “Woman.” Perhaps her eyesight was blurred by tears, or perhaps Jesus’ physical appearance had been purposely changed to forestall recognition. Importantly, Mary neither comprehended the Savior’s Resurrection when she discovered the empty tomb nor when she actually saw him with her natural eyes. When the Lord then said her name, “Mary,” her spiritual eyes were opened (John 20:16). Suddenly her encounter with the resurrected Lord had become very personal.

The Savior’s singling out of women to be His witnesses cannot be anything but deliberate. His words and actions repeatedly reinforced His truth that women were not second-class but worthy of the same blessings from God as men could receive.

Find many more fascinating insights like these in Women of the New Testament by Camille Fronk Olson. Now available at Deseret Book and deseretbook.com.