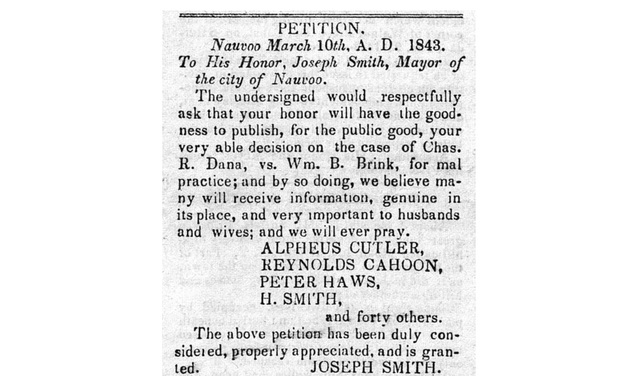 Joseph Smith was a judge and other things you might not have known: Insights from the latest Joseph Smith Papers volume

In April 2021, The Church Historian’s Press released the latest volume in the Joseph Smith Papers Project. Documents, Volume 12 covers five pivotal months of the Prophet Joseph’s life in Nauvoo, from March through July 1843. Here are five things from the volume that you may not have known:

When Joseph Smith became mayor of Nauvoo in May 1842, he also became judge of the mayor’s court. In this tribunal, Joseph wore two hats: the first was as a justice of the peace with jurisdiction over minor infractions of Illinois law and civil disputes. The second hat gave him jurisdiction over alleged breaches of Nauvoo city ordinances. He was also chief justice of the Nauvoo Municipal Court, a tribunal that heard appeals from individuals convicted of violating city ordinances. In addition, the municipal court had authority to issue writs of habeas corpus for individuals who believed they had been arrested unlawfully. In March 1843, Joseph Smith presided over perhaps his most famous case in the mayor’s court, in which an aggrieved husband, Charles Dana, sued a local doctor, William Brink, for medical malpractice in the treatment of Charles’s wife, Margaret Dana, who was pregnant in the third trimester. The trial garnered such attention that Nauvoo citizens petitioned Joseph to publish his decision in the city newspaper, which appeared on March 22. You can read the published trial report, with annotation placing the case in legal, historical, and medical context, in Documents, Volume 12.

2.    Joseph Smith envisioned missions in every corner of the world.

When the Church was organized in 1830, there were only six members, all of whom were New York residents. Gradually, missionaries fanned out through the United States and Canada. In 1837, the Prophet sent the first missionaries to proselytize outside of North America, in England. In Documents, Volume 12, we see that by 1843 Joseph Smith was envisioning the expansion of the Church throughout the entire world. During the months covered in the volume, Church leaders called the first missionaries to Russia, the Pacific Islands, and other international missionary fields. At a meeting with members of the Quorum of the Twelve Apostles, held in April 1843, he further proposed sending missionaries to Germany, Italy, France, Saudi Arabia, India, and Latin America, challenging the Twelve not to “let one single corner of the earth go witho[u]t a mission.”

3.    Joseph Smith was responsive to the concerns of women.

In early 1843, church members from Philadelphia began writing letters to Nauvoo complaining of the conduct of Benjamin Winchester, who had formerly served as presiding elder (similar to a branch president or a bishop) of the city’s branch. Although Winchester had been instrumental in the growth of the Church in the area, his strong personality had polarized the Saints. Furthermore, he sometimes said things that were harmful to members of the branch. Two women, Eliza Nicholson and Sybella Armstrong, were victims of Winchester’s words. Because of gossip and lies Winchester had spread about them, the two women separately wrote to Joseph Smith and other Church leaders to accuse Winchester of slandering their reputations. They pleaded that action be taken against Winchester. Responding to the letters, the Prophet met with members of the Quorum of the Twelve Apostles in May 1843 to review the charges against Winchester. When the flow of the meeting trended in Winchester’s favor and against the women, Joseph spoke strongly in their favor. The apostles, acting on Joseph’s counsel, suspended Winchester’s license and recalled him to Nauvoo.

Joseph Smith spent much of the summer and fall of 1842 in hiding as he sought to avoid Missouri officials’ second attempt to extradite him. During those months, he was lonely and yearned to be reunited with the Saints. When his legal situation was resolved in early 1843, he emerged with a sense of urgency to teach the Church. Never before had he preached with such frequency, appearing at the pulpit in the unfinished temple nearly every Sunday. Starting in 1843, Joseph ensured that at least one and quite often two scribes were on hand to take notes of his sermons. As Church members came to expect that he would preach on any given Sunday, more Latter-day Saints came prepared with paper and pen to take notes for their own purposes. Many of the discourses featured in Documents, Volume 12 were therefore preserved by multiple notetakers, providing a fascinating window into the Prophet’s teachings. Most significantly, in 1843 Joseph increasingly focused his public remarks on the temple, as he sought to prepare the Saints to make eternal covenants and receive ordinances when that sacred edifice was completed.

5.    Joseph Smith saw friendship and the pursuit of truth as “grand fundamental principles” of the restored gospel.

In June 1843, while he was visiting relatives outside of Nauvoo, two law officers arrested Joseph Smith as part of Missouri officials’ third attempt to extradite him. Although the Prophet, with the aid of attorneys who were not members of the Church, successfully challenged the extradition, the rough manner of the arrest left Joseph with physical and emotional reminders of this recent persecution. When the Prophet addressed the Saints in Nauvoo on July 9, it would have been understandable if he had focused on the wrongs he had suffered. Instead, he spoke of forgiveness and the commandment to love one’s enemies and taught that the “principle of love” was manifested by a willingness to lay down one’s life to protect the rights of others, regardless of beliefs. He further stated that “one [of] the grand fundamental principles” of the restored gospel is to receive truth, “let it come from where it may.” Two weeks later, on July 23, the Prophet returned to these themes, declaring that “frie[n]dship is the grand fundamental prin[c]iple of Mormonism.” He hoped that Church members would “pour forth love” and revolutionize the world. Explaining that truth could be found in other religions, he urged the Saints to “get all the good in the world” and “come out a pure mormon.”

The twelfth volume in the Documents series, to be published in April 2021, features ninety-six documents including Joseph Smith's correspondence, accounts of his discourses, and his last major written revelation. The volume also features a representative selection of his more routine documents such as deeds, ecclesiastical authorizations, and financial and legal records.

Lead Image: Courtesy of The Joseph Smith Papers. Petition to Joseph Smith. On 2 and 3 March 1843, Smith presided over a medical malpractice suit, Charles Dana v. William Brink, as a justice of the peace in the Nauvoo, Illinois, mayor’s court. After Smith delivered his lengthy ruling in favor of the plaintiff on 10 March, more than forty Nauvoo citizens petitioned the mayor to publish his decision. With the assistance of scribes Willard Richards and William W. Phelps, as well as Justice of the Peace Orson Spencer, Smith prepared the trial report, including his ruling, for publication in the Nauvoo newspaper Wasp on 22 March 1843. It was the only decision rendered by Smith that was published during his lifetime. “Petition,” Wasp, 22 Mar. 1843, [2]. (Church History Library, Salt Lake City.)