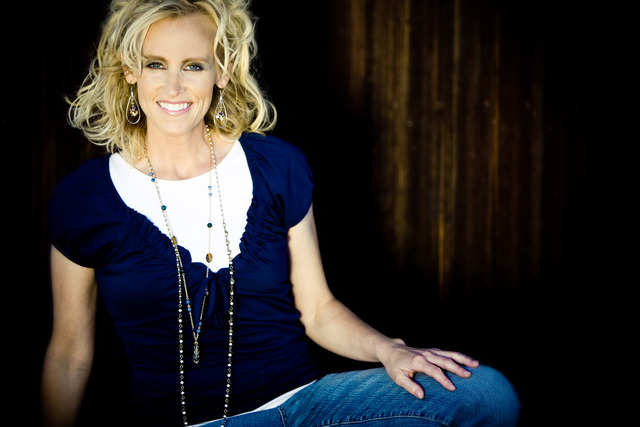 A personal peek into the life of the mother of four girls, artist of eight albums, and author of two books.


You talk about inspiration being found in the nature and beauties of Alaska, where you grew up. What now serves as your primary inspiration?

Has your music changed tone with this change in inspiration?

I think it has stayed in the same vein. It is certainly Christ-centered, but I think in the most recent album, a few more of the songs were about life’s experiences.

Do you feel your public image accurately represents who you are?”

I guess I would have to ask what my public image would be! I guess it depends on what people think of me, which, I don’t know if I would really know that. Since I am in control of what is on the blog and what is on the CD, then yes, it definitely represents who I am. In terms of how others see me and view who I am, I don’t really know. That could be a scary thought!

Do your four daughters still request a bed time song?

Oh, no. Not really. I don’t really sing to them that often, it’s mostly like: hurry up and get to bed! Sometimes we tell stories before bed, but that is about all.

What is a talent you really want to develop?

I want to be a great cook some day. I want to be such a good cook some day that my kids and their spouses and their kids want to come home to eat my cooking. I have a long way to go; I’m not going to lie to you! But I love it! I love to learn, so it is fun to learn new things about cooking and I love to eat, so, it makes for a good combination.  I love the feeling in the home when there is yummy stuff cooking and baking. There is nothing specific I want to master, but to be good at cooking everything!

Which is your favorite song?

I love the message of “If I Only Had Today.” I love the reminder of things that are most important, and making sure that we are focused on those on a daily basis and trying to not let the time go by too quickly without appreciating all the blessings that we have and the loved ones that we have in our lives.

Have you ever had an embarrassing performance?

O great! You would bring that up! I have such a recent one! It is still an “owie.” I was singing at the Time Out for Women this last fall, and right in the middle of the song, my voice sounded like Kermit the Frog! I don’t know what happened. I don’t know if some saliva went down my throat wrong, but seriously in the middle of singing a lyric I just, all of a sudden, did a Kermit impersonation, and kept on signing. It was so embarrassing! I look back on it, and I am lucky I didn’t start laughing in the middle of that. That would have been my personality, just to stop and laugh, but I just kept on singing.  Oh well! Sometimes those things happen. What do you do? Oh, all four thousand people noticed—it was one of those you couldn’t help but notice. I was singing a song called, “Unwritten”… yup, no humor in that one at all!

What was your very favorite performance, and what made it so special for you?

I think my favorite performances are when I feel like there has really been a connection made through the Spirit, and for me, that is the only way to make a connection. I am not talented enough or good enough to make that connection—my music is not good enough to do that on its own. But when the Spirit is there—and he connects all of us or he speaks to us, or to the audience personally—those are my favorite because then I feel like every bit of time put into it is worth it. Every sacrifice is worth it when I feel like it is something the spirit wants to be a part of.

What single event in your life are you proudest of?

I think the decision to marry who I married. And, luckily, he was willing to marry me. Everything that is good that has come has been a result of him and his goodness and his support and his love of the gospel. His foundation in the gospel and his Christ-centered life and everything that is good has come from that because the next thing I would say would be our children. If I were to go another step further, I could not have done music without him. I could not of. He has been a partner one hundred percent in that.

How long have you two been married?

It will be 19 years this April, April 29th. We met in Alaska. He served his mission in Alaska, so I met him up there when I was home one semester, then we met up back at BYU and started dating there.

As a best-selling LDS artist, the industry expects you to keep producing inspiring, popular music. Others in the industry may see you as a challenge or as an inspiration, or both! How do you feel about that competitive dynamic?

That is the best part of this industry. I’m not sure if I have ever felt that competiveness, there is actually more of a unity, and it started from the very first step into the market. I felt open arms from the other artists, and hopefully, I have taken the same approach when other people have entered the LDS scene. I feel like it is more of a family, and in terms of writing and composing other projects, it gets better and more fun all the time. I am in the middle of writing my next CD, which we hope to release this next fall, and it has really never been more fun. I’m really excited about it; we really have some good stuff to put out.

Is a title or concept decided on for this new album?

There is one title I am considering, “Dancing in The Rain.” I’m not sure if we will go with it, but I sure like the song and the concept of it.

What else is coming up in your career?

We also have Bedtime and Naptime, which comes out in the spring which I am SUPER excited about. (To learn more about her book, click here.) Ironically, I’ll go to these concerts, especially Time out for Women, and I’ll sing these little funny songs that I have made up about motherhood, and we all laugh our heads off. Then afterward, when I’m talking with the women, they want to know where they can get those songs. Those funny little songs, we call them “little diddies,” are actually what they ask about most. Sometimes I’m like, “Hey! I have written other songs that are actually really nice and really good!” but they just aren’t the funny ones. So, finally we have come out with a way to make those available to the public, and those are going to be available just in the next couple of months.

If you could sing a duet with anyone—today or throughout history—who would it be?

I would totally sing backup vocals for Trisha Yearwood, if she would have me. And yes, I do say backup because I know I am not up to the challenge of being a duet partner with her. I love her voice. I always have, so I would see if she would let me stand behind her!

What was the most memorable moment in your music career?

One year, I couldn’t tell you what year it was, but we lived in Colorado at the time, Tim, my husband, said we were flying to Utah, and it’s surprise. He was in cohorts with Laurel Christenson, because she and Tim both knew about this award that I had won, and they wanted to surprise me. So Tim and I flew out to Utah, and we got dressed up and went to an event where an award was given. One was given to me for music, and one was given to Neal A. Maxwell for being an author. Part of it was that they went to the effort to surprise me—that was so neat and so fun, and that hasn’t happened to me very many times in my life. That was fun to be surprised. It was humbling and a privilege to be in the same room as Elder Maxwell, and it was a fun time to get away and have a nice weekend. It was a neat moment in my career.

You have had the opportunity to meet all sorts of people through your career. What has been an especially memorable experience meeting someone?

My favorite is when I meet the women that I have so much in common with. I remember meeting a women in Ohio at a Time out for Women event, and she shared with me how her niece was 9-years-old and had a brain tumor. They didn’t expect her to live much longer, and she didn’t. This woman that I met in Ohio contacted me from Ohio via e-mail to let me know that her niece had passed away. We ended up sending flowers to their family to let them know that somebody who didn’t even know their family cared about their loss and was praying for them. They sent us a DVD from her life and pictures of her, including a poem and at the end of the poem it had the phrase “just let us cry.” After I read that, I knew that it just had to be a song, and that is when I wrote “Just Let Me Cry.” The song gives people permission to mourn and to cry in something that is so difficult. Not that they aren’t going to overcome it and be happy again, but there are moments in the healing process that we just need to cry. So, meeting a women in Ohio who does her dishes and cleans her bathrooms just like I do, she shared a piece of her life that inspired a song that in turn I think has blessed a lot of different lives.

What is your secret of keeping a balance of singing, performing, and being a good wife and mother?

Saying one word, which is “no.” It’s not an easy one to say. I think it was Steven Covey that said it is easy to say no when there is a deeper yes burning inside. So a lot of things that I have wanted to do I have said no to because I wanted to say yes to my family, especially at this stage. I just don’t want to miss raising them, watching them grow up. I don’t want to look back and say, “Well, I remember singing a lot of nice songs, but I don’t remember raising my kids.” That is number one to me, being a mother and a wife, so sometimes I have to say no to some things that I sure wish I could have done. Like a cruise to the Mediterranean. I would have loved to say yes to that. But I just had little ones, and I couldn’t leave them for fourteen days to go do that. But maybe one of these days. Down the road.