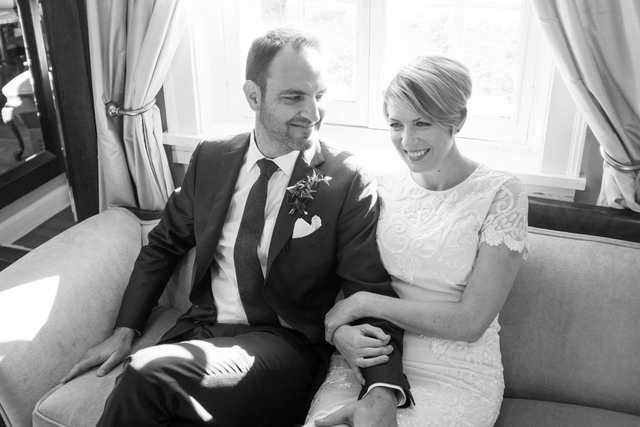 Kristen Howey Dimick: 5 Life Lessons I Learned from Being a Church Spokesperson, Wife, and Stepmom

Tolstoy wisely wrote “Faith is the force of life.”

Doesn’t that say it all? Faith is what keeps us going into the great unknown called life. And I’ve never felt it so much or so palpably as in the past few years as I’ve adapted to an array of new circumstances.

Life transitions--even the good ones--can be tricky business. Whether it’s a move, marriage, divorce, job, new family circumstances, re-entering “normal” life after a mission, graduating from college, you name it, those uneasy times of change—and the turbulent emotions that usually come with them—are tough. I’ve had a few “lessons learned” that, I hope, can be helpful to anyone experiencing life’s transitions.

If I’m honest, I’ll admit that I went to college hoping to get a degree and get married. I valued education, but I wasn’t sure I was up for a challenging career. I was hoping for a “career” more along the lines of “seasonal part time work in order to get a good discount on home decor” kind of work along with being a full-time mom.

During my time in college, I stumbled on to Marie Hafen’s talk, “Celebrating Womanhood," and her words ignited something in me.

I have repeated those words thousands of times since reading them in the 1992 Ensign. This message helped inspire me to start looking more earnestly into actualcareers, take my own spirituality more seriously, and realize that enriching my own life with knowledge and experiences was not time wasted.

Just as Sister Hafen discusses, most women have lives that are filled with ups and downs, highs and lows, challenges and successes. But, as she states, “Women who are prepared for life can celebrate with confidence. Never have opportunities for prepared women been greater—in the home, in the Church, in the workforce when appropriate, and in the community.”

Lesson learned #2: Keep it small. Keep it simple. Give it time. 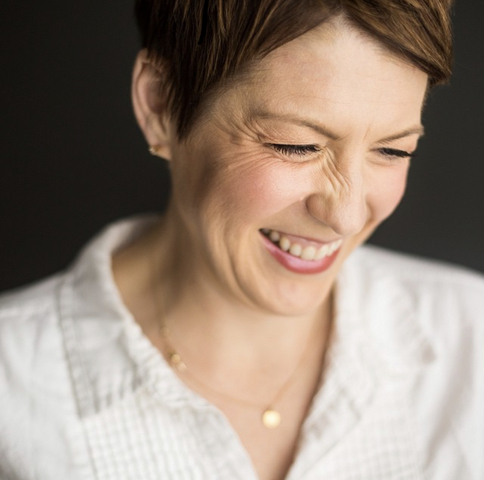 In 2014, I packed up my life, leaving my fabulous hometown, Las Vegas, and headed north to the Beehive State. I had accepted a job as one of the Church’s media spokespeople and was cautiously adjusting to both my new role and my new surroundings. I should have been on top of the world, right? But, really, I was nervous, a bit overwhelmed, and lacking any confidence in my abilities, despite 20 years in the profession.

“Church spokesperson” is not a job title I ever imagined I would have, nor had I aspired to it. Yet, when the opportunity arose, it felt right to pursue it.

When you say that you’re a Church spokesperson, many people expect it to be like working at the temple or something very spiritual and uplifting. For me, though, it was a role that was filled with high highs and low lows as you hear and feel both the joys and heartaches of members worldwide.

It was around this time that I came across Virginia Pearce’s 2011 keynote address from BYU Women’s Conference, “Prayer, A Small and Simple Thing.” Sister Pearce said:

“I have a little tiny sign on my computer at home— it’s not embroidered, cross-stitched, or framed. It’s just a little sticky note and it says:

Throughout this talk, Sister Pearce illustrates how faith, prayer, and a willingness to believe “Thy will be done” allows God’s grace to take us through the messiness of life and, often, makes more of our lives than we had imagined. 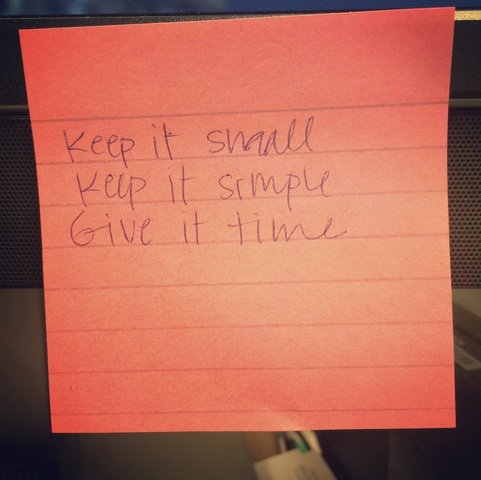 These words quickly became my guidepost in all aspects of my life, including work. I even followed suit and created my own sticky note, which was front-and-center on my computer screen throughout my time at Church headquarters. Each time I faced something that felt overwhelming or intimidating, these words reminded me to pause, break things down into smaller, more actionable, clear-cut pieces, and get to work on those tasks. Then, most importantly, allow time to work through things, gain understanding or even, in some cases, change.

I’ve shared this advice with numerous friends and colleagues as they face their own challenges. Whether it’s wrestling with Church doctrine, family relationships, new job, trying to break a habit or form a new one, I find this guidance to be applicable and incredibly centering. Keep it small. Keep it simple. Give it time.

Lesson learned #3: Slow down when you hit turbulence.

In late 2016, at the not-so-young age of 43, I got married. It’s quite a love story, if I do say so myself. I reunited with an old college friend (on whom, admittedly, I had actually had a bit of a crush on during college) 25 years after we first met. We both experienced a lot over two plus decades—good and bad—and now we were beginning a new chapter of our lives together. I also became a new stepmom and moved to New York, leaving friends, family, and a career behind. Jokingly, I called myself “the reverse pioneer.” 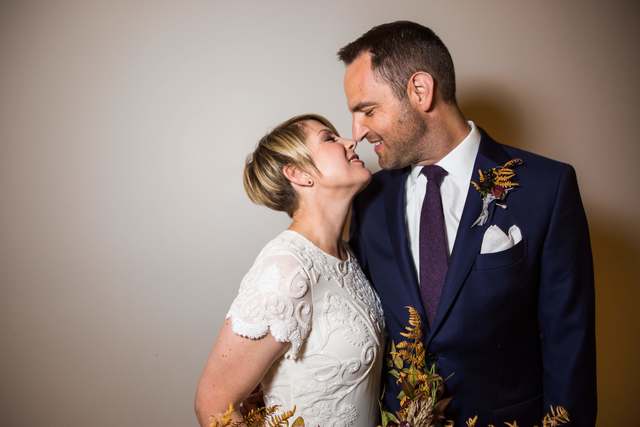 Ohhhhh, moving. If you want to reconnect with every single emotion in your soul, move somewhere new. There are highs and lows, joys and trials, excitement and anxiety. This move felt different than my previous moves. While I didn’t know much about day-to-day life in Salt Lake, I had been there plenty of times. Besides, I was literally surrounded by all things Church.

With this move, for the first time in my life, I was moving somewhere where I didn’t have a job, which was both refreshing and horribly frightening. The climate, geography, the neighborhoods, the styles—everything in Buffalo, New York, felt distinctly different than what I was used to in the western US. And, while I was moving in with the best husband and stepkids a girl could ask for, it had been years since I had shared a home with anyone. Suddenly, I found myself crammed into a tiny 1900-era bathroom getting ready with three other people (now known as “my family”) at the same time. That had never happened before!

For me, the best way to adjust to, well, everything, has been to slow down, focus on basics, and simplify. From cutting back on social media to streamlining our belongings to creating more consistency in our little household, I am working to incorporate the counsel to slow down when you hit turbulence, as was shared in this message from Elder Uchtdorf, which I have listened to at least 8,000 times. As I’m learning to simplify everything—especially my expectations—I am also learning that there’s a whole new level of beauty and joy that comes from focusing on the essentials, including learning to enjoy simple moments like brushing my teeth side-by-side with these humans of mine.

I distinctly remember a time when one of my Las Vegas coworkers said “Kristen, you need to let people help you.” And he was right. It’s still hard for me. In fact, as I struggle to write this piece, my incredibly articulate, well-written husband, Matt, is by my side willing to help and yet I have a hard time saying “sure, give me your thoughts.” 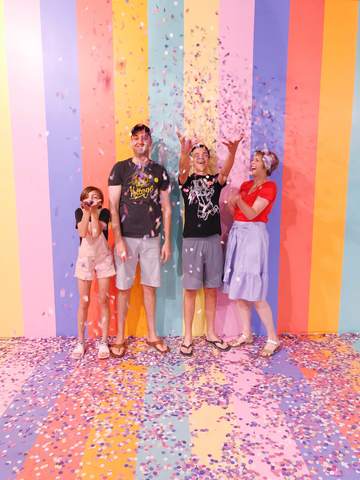 Here’s the thing: I spent a long time trying to become self-reliant and not wanting to be a burden to anyone. But the downside to that is that it’s hard for me to let others help or to even open up enough to allow others to lend a hand.

I’m reminded of Sharon Eubank’s talk, “Turn On Your Light,” from the October 2017 women’s session, where she told about the life-saving human chain formed on a Panama City, FL beach that, ultimately, saved the lives of two children who had been caught in a rip current for more than 20 minutes.

When I pause and look back at my life, there has been a long, human chain of people who, in one way or another, have pulled together and helped rescue me along the way. My parents and family, Matt, his kids, dear friends, fellow ward members and leaders, and colleagues who have pulled me out of my own stormy seas. Thank goodness they push their way through the waves to reach me. I’ve needed them more than I like to admit.

Lesson learned #5: God really does have a plan for us.

On a recent Sunday morning as I was getting ready for church, I had one of those reality check moments:

I live in New York.

It still feels very surreal somedays—not in a bad way, just in an “I can’t believe this is my life” kind of way.

Later at church, I was helping in Primary, sitting with the very enthusiastic 4–6 year olds. I love the excitement, the wiggles, the silliness, and the pure joy of Primary. As the kids started singing—at the top of their lungs, of course—my eyes started to fill with tears. I grabbed my phone and hit “record” as quickly as I could so I could capture this burst of truth being shared.

My life is a gift; my life has a plan.

My life has a purpose; in heav’n it began.

The words to this Primary song, “I Will Follow God’s Plan,”  said it all. It really is that simple. As they sang, I thought how clear-cut and simple things really are. God has a plan for me. It’s distinct. If I do my part, God is bound to help.

And I will be happy on earth and in my home above.

A native of Las Vegas and BYU graduate, Kristen Howey Dimick has worked for more than 20 years in the public affairs arena, including serving as a Church spokesperson from 2014-2016. She now lives in Orchard Park, New York, with her husband, Matt; her stepkids, Liam and Normandie; and her fluffy dog, Oso.