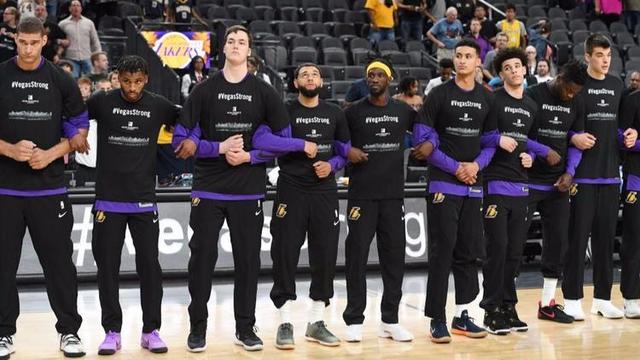 “What I need you to do right now is show that evil and hate will never win,” Magic Johnson said during an L.A. Lakers game.

As far as his parents can remember, little 12-year-old Quade Robbins hadn’t smiled since the day his brother fell victim to the horror that gashed this city on Oct. 1.

But when the head coach of his favorite team put his arm around him, his lips parted, his face glowed and for a few moments he stopped thinking about the pain. He laughed when Lakers coach Luke Walton turned to Tracey Robbins, Quade’s mother, and asked if she was Quade’s sister. His eyes widened as Walton shared tidbits about the players. His family watched, grateful, as the entire team stopped on their way out of the locker room to say hello and sign autographs. Sometimes they hugged each other, and sometimes they fought back tears.

When a shooter fired bullets into a crowd watching a country music concert outside Mandalay Bay last week, 58 families lost someone. The Robbins family was among them. Quinton Robbins was killed when a bullet hit him in the chest and exited out of his lower back. He was 20. They honored him in a private funeral on Saturday.