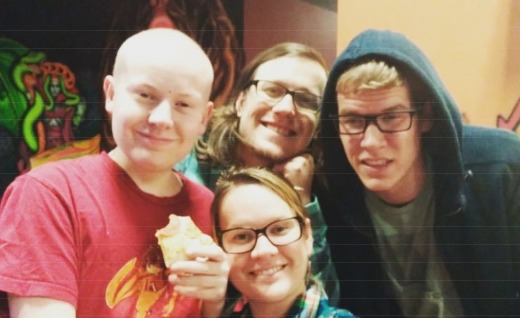 Alec Unsicker has walked in the shoes of cancer patients. That's why the 18-year-old Latter-day Saint, who was diagnosed with a brain tumor at age 11, created the AJU Foundation.

The AJU Foundation is a charitable non-profit organization that raises money for gifts to help ease the burden of cancer patients. People can fill out a "Smiles Application" on the foundation's website on behalf of someone they know who is suffering from cancer. After the AJU Foundation gathers information about the patient's hobbies and interests, they put together a care package specially tailored to put a smile on his or her face.

Unsicker's cancer has been in various stages of treatment and remission for several years, but it recently returned in his spine. "The doctors said they couldn't really do anything else for me," Unsicker said. "I have come to grips with the fact that I might die soon, and I'm fine."

Despite his bleak prognosis, Unsicker has chosen to make his remaining time on earth count. "The foundation is still young, and we have been able to help two wonderful people so far," he said. "It has been so much fun. The first person we helped was a man in Texas who had been battling cancer for a while . . . the application was sent in by his friend and stated that he loved barbecuing with his friends and family, but had been embarrassed to have people over because he had not felt good enough to keep up the lawn because of [his] chemo [treatments]."

That's when the AJU Foundation stepped in. They put together a package with two outdoor speakers, an iTunes gift card, and a Visa gift card for meat and outdoor furniture cushions. Then, to solve his lawn problems, they called up a local service that agreed to take care of his lawn for three months. Essentially, they gave him the tools to put together a great barbecue.

"The second person we helped was a 9-year-old boy who had been battling cancer for almost his whole life," Unsicker said. "The doctors [had] given up on him. His mother submitted an application to the foundation saying that he didn’t have long to live and that if we could do anything just to make him happy, even if it was just for a day. So we put together a package for him with a lot of toys and fun things that he was into. We also recruited BYU’s mascot, Cosmo, to deliver the package with us. He lives in the Provo area and my foundation is located just north of Salt Lake, so I got to deliver the package with Cosmo to the boy’s house. It was really cool."

Unsicker's positivity in the face of his adversity is an inspiration to those closest to him.

"Alec is a major key in helping our family cope with the situation," his older brother, Braydon, said. "He has this unique ability that is difficult to describe. He is able to see the world in a very positive way . . . If he wasn’t so chill with the situation and okay with what is happening then it would make it much more difficult to cope with everything. Through his example, my family and I are able to better help him in his battles and his strength helps us fight our own battles."

That being said, Unsicker's family still has their struggles. "I don't like it at all," Braydon said of his brother's condition. "There is so much unknown to his situation and that adds to the difficulty of it. We know that his x-rays are not encouraging at all and that his tumors are going to eventually start compromising his body until his body gives up. But we don’t know the timetable of when that is all going to happen."

So in the meantime, the family relies on their faith and on Unsicker's inspirational example. "[My faith] has helped me accept that I am going to die and then everything will be ok for me," Unsicker said.

"I know God is in charge and I know that I am and have been doing what I am supposed to be doing. So, whatever happens is what is supposed to happen. As for the foundation, I suppose my faith has made me realize that helping others is how you be happy. That is something the Church teaches a lot and it’s true."