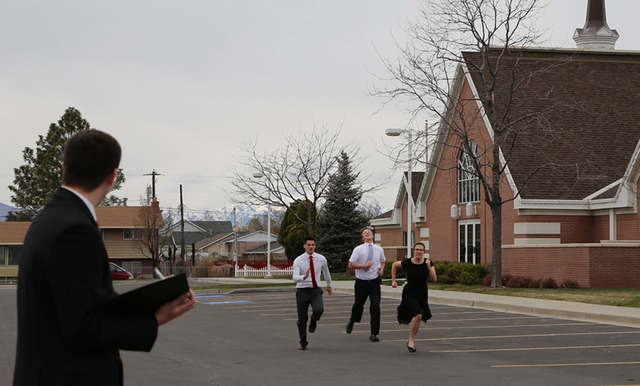 Did you hear about the deal between the Church and the NBA over Jabari Parker's mission service? And are you prepared for the extra Sunday session of conference this weekend? Before you get too excited, make sure that you check our comprehensive list of LDS pranks pulled yesterday by media outlets from around the web:

We're proud of the committment on this one--not only did the meme-ers over at BYU Memes go through the trouble of writing an article about the chance for beards to be allowed at BYU, they also photoshopped it into a screenshot image of the school's newspaper, The Digital Universe.

Unfortunately for Church school students, the clause in the code that maintains they must remain clean-cut with specific guidelines about dressing and grooming (in particular, with regards to beards), looks to remain a fixture of the university's Honor Code for the foreseeable future.

2. NBA strikes deal with LDS Church for Jabari Parker by Times and Seasons

The mystery of whether or not Jabari Parker would go on an LDS mission was apparently solved yesterday, with Times and Seasons reporting that the Duke basketball star's future had been settled with a compromise between the Church and the NBA: the Church agreed to call Parker to serve in whatever city drafted him, so he could do both.

While the joke is pure fiction, it does tap into a current interest in the LDS community about Parker's choice, which at this point, is still uncertain.

According to this semi-serious-sounding article, "New spirituality tests, physical assessments, and even background checks, will be conducted to ensure missionaries can handle the rigorous day-to-day demands of missionary work." These measures include things like push-up tests, and timed sprints (the pictures are what really sell it).

Fortunately, these additional requirements aren't in the works.

4. LDS Church to Utilize Emails to Share the Gospel to NSA Employees by LDS Smile

We'e heard this one before, but it's still a humorous concept given the current political atmosphere: the article explains how the Church, knowing that emails are being monitored by the United States National Security Agency (NSA), is putting spiritual messages into emails that are directed towards the monitoring team.

Our favorite line from this silly article? "One source within the agency has stated that they have seen an increase in pass along cards being circulating within the employee lounge area and a surprising number of them humming 'Popcorn Popping' during work place hours."

It's a cute idea, but all in good fun.

5. Three Nephites Spotted on I-80 by LDS Living

This joke comes to you from us! The story goes that one Sister Firstap spotted three clean-cut men on the side of the road, carrying copies of the Book of Mormon, who told her to start her food storage before mysteriously vanishing!

Of course, the story is too out there to be real, but the rest of the article goes on to talk about other pieces of Mormon "Mythology," so it's educational, with a side of light-hearted tomfoolery.

We read this one and nearly had heart attacks--this article outlines how the Church "announced" an additional conference session Sunday evening starting at 6pm MST (which actually isn't unheard of; earlier in the history of general conference, there were more sessions given across three days instead of just two). The giveaway was in the "munch and mingle" the article announced to follow the meeting at temple square. Phew! Indeed, yesterday's "announcement" of an additional Sunday evening session of conference were just an April Fool's joke.

What other April Fool's Day pranks did you see? Let us know in the comments!