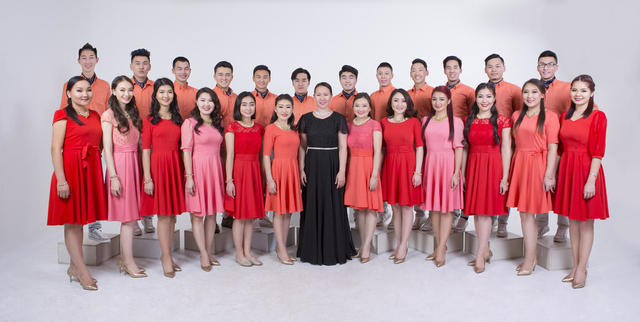 “I see your faces light up!" a judge on Mongolia's Got Talent told a choir made up of young Latter-day Saints. And as they went far into the competition, the judges and the country couldn't help but be impressed by the faith of these artists and their desire to donate any of the prize money they received to an orphanage in Mongolia. Check out one of their performances on the show:

The combined Ulaanbaatar Mongolia East and West Stake choir reached the semi-finals of the second season of the nationally televised show Mongolia’s Got Talent! in December 2016. Seminary and institute students ages 14-28 comprised much of the choir, with the exception of a few young married adults. Approximately half of the choir members were returned missionaries.

Television audiences were curious about the choir and how it made it to the national stage. Odgerel Ochirjav, president of the Ulaanbaatar Mongolia West Stake, recalled when this local multistake choir was first organized following a visit from a Brigham Young University choir in 2008. The idea to showcase the choir in Mongolia was something far from his mind at the time.

In January 2016, the stake president’s brother-in-law, Tsogtbayar Samandari, had finished watching the first season of Mongolia’s Got Talent and felt impressed to call President Ochirjav.

“I was watching Mongolia’s Got Talent . . . and remembered your BYU choir which was fantastic," the stake president's brother-in-law told him. "I had a strong impression that your church choir should participate and it would be very interesting because it would be something new.

Fun Mongolia Mormons On TvMongolia,Mormons On Tv,Fun
Comments and feedback can be sent to feedback@ldsliving.com