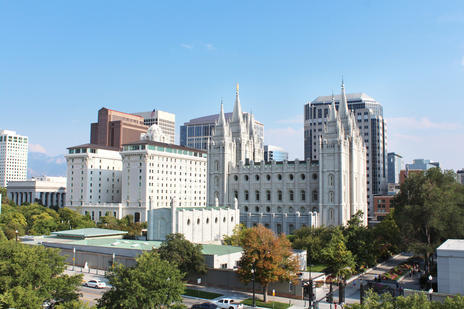 The LDS Church responded Thursday to an unverified report about suicide deaths among Mormon LGBT people.

"We mourn with their families and friends when they feel life no longer offers hope," senior church leaders said through a spokesman.

Wendy Montgomery, a co-founder of the Mama Dragons, a group of Mormon mothers with gay children, reported last week that she had been told 32 young LGBT Mormons have died by suicide since early November. . . .

The timing of Montgomery’s report has raised concerns in the LDS LGBT community that church leaders’ Nov. 5 announcement of new policies regarding same-sex couples and their families could have contributed to increased anxiety for some. Experts say it’s impossible to pinpoint the causes of any suicide because research shows there is never a single reason.

► You'll also like: 4 Lessons of Hope I Learned from My Sister's Suicide

Last week in Los Angeles during a conference for Affirmation, a Mormon LGBT support group, Montgomery, who is well-known in that community, reported that 32 families had contacted her directly about the deaths of a child or sibling. She said most were men (27), but three were female and two were transgender. The average age was 17. All were between the ages of 14 and 20. Montgomery said 26 deaths took place in Utah, four in Idaho and one each in Arizona and the New England area. Utah health department officials have been able to confirm 10 suicides in that age range in Utah since the start of November. . . .

Senior LDS leaders reiterated through a spokesman on Thursday that they expect church members to actively reach out to and care for young Mormon lesbians, gays, bisexuals and transgender people.

"Every soul is precious to God and to the church and the loss of life to suicide is heartbreaking," church spokesman Dale Jones said. "Those who are attracted to others of the same sex face particular challenges and pressures in this regard, both inside and outside the church. We mourn with their families and friends when they feel life no longer offers hope. Each congregation should welcome everyone. Leaders and members are taught to follow the example of Jesus Christ and to reach out in an active, caring way to all, especially to youth who feel estranged or isolated. The church has repeatedly stated that those who feel same-sex attraction and yet choose to live the commandments of God can live fulfilling lives as worthy members of the church. We want all to enjoy the blessings and safety offered by embracing the teachings of Jesus Christ and living the principles of His gospel."

► You'll also like: LDS Author Who Lost Sister to Suicide: Those Struggling, You Are Not a Burden

Each of the 32 suicides documented by Montgomery took place after Nov. 5, when LDS Church leaders released new policies in an online update to Handbook 1, a private document of instructions to local priesthood leaders who run Mormon congregations. The update clarified that the church, because of its fundamental doctrine on marriage, considers entering a same-sex marriage to be apostasy and grounds for excommunication. A new section in the handbook instructed local leaders that children living with parents who are in a same-sex relationship cannot receive baby blessings or baptism before age 18.

John Gustav-Wrathall, a gay man who regularly attends an LDS ward in Minnesota and is on the board of Affirmation, an LGBT support group for Mormons, said he supports church leaders and understands the reasoning behind the announcements, but he said many felt heartache.

“There continue to be LGBT folks who have testimonies and who want to raise their children in the church,” he said.

Church leaders have said that they do not reject LGBT members but love them, and that all should extend love and encouragement to them. They also have said repeatedly that members who experience same-sex attraction can live full, productive lives and participate fully in the church by following the moral laws provided by God. . . .

The church has a website, mormonsandgays.org, designed to encourage parents and families to embrace their LGBT children, brothers and sisters. The site is scheduled to be updated early this year. The faith’s official website, lds.org, also has a resource page devoted to the issue, and the church released an anti-bullying video. . . .

For more on this topic, check out Elder M. Russell Ballard's Suicide: Some Things We Know, and Some We Do Not and Meghan Decker and Betsy Chatlin's Reaching for Hope: An LDS Perspective on Recovering from Depression.