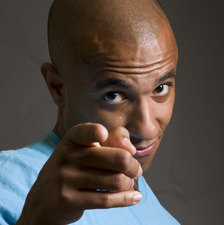 LDS Comedians Who Prove Clean Jokes Can Be Hilarious

“I saw this sign while I was driving that said ‘Blasting Zone Ahead.’ Wow—shouldn’t that read ‘Road Closed?’”

If you’re a Mormon, chances are you’ve heard of Brian Regan. One of the few comedians who have managed to entertain audiences with clean material, Regan delivers a hilarious stand-up routine. Regan is not LDS, so his popularity amongst Church members is a testament to both the deteriorating morals of entertainment and the longing Latter-day Saints have for media that breaks the mold. Indeed, Brigham Young gave a voice to this sentiment when he said, “I want such [entertainment] performed as will make the spectators feel well.” But even though modern comedy too often feels like a veritable blasting zone of crude jokes and curse words, the following four LDS performers strive to demonstrate that for clean comedy, the road is anything but closed.

Hamilton’s huge smile and self-deprecating humor have charmed the audiences of Comedy Central, Conan, and The Late Late Show in recent years. His clean brand of comedy often includes references to dating struggles and his choice to abstain from alcohol.

Many know him as the star of the BYU library’s “New Spice” commercial, but Jones has graced the stand-up stage many times in his comedy career. “I want people to know that comedy can be a positive thing,” he says. “It doesn’t have to be known as something vulgar.”

This squeaky-clean comedy troupe from Brigham Young University has been winning awards and entertaining audiences with their sketches for years—but they jumped onto the national stage with three hilarious Hunger Games videos that received four million views.

“Humor connects people so quickly,” says Soelberg, a stand-up comedian of seven years. Laughter, he asserts, is something that people can bond over. “Think of how loved President Hinckley was . . . one of the first traits people will always remember was his sense of humor.”

More good news for LDS audiences: Excel Entertainment released Peculiar People, a DVD collection of Mormon stand-up comedy featuring Soelberg and other performers. Get it at Deseret Book stores or at deseretbook.com!