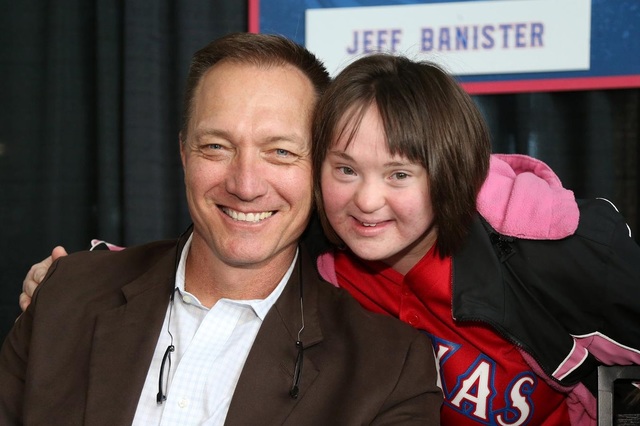 As the Texas Rangers push toward the playoffs, Hannah Speirs cheers them on, dancing enthusiastically in her prime time spot near the Globe Life Park Pressbox. And while the Rangers are reaching for their World Series dream, Hannah is living hers.

It all began with a tornado. Hannah, who has Down Syndrome, was working as a laundry aide at a local nursing center when a tornado damaged the facility, leaving her temporarily unemployed. When people asked what she planned to do, Hannah said, “I’m going to work for the Rangers.” And, though it may have seemed only a pipe dream, her father knew people, who knew people, who knew people. Eventually word of her dream reached Jim Sundberg, then the ball club’s senior vice president.

"He called me,” Hannah said.

Hannah, along with her parents Charlotte and Kent Speirs, met with Sundberg, who then asked one of the club’s most avid fans, “What do you want to do for the Rangers?” Hannah first volunteered to clean their uniforms, but Sundberg had a better idea.

“Will you work home games?” he asked.

“Except Sundays,” she replied.

“Do you go to Sunday School?” Sundberg countered. “If you pray for us, we’ll give you Sunday’s off.”

A member of the Church of Jesus Christ of Latter-day Saints, Hannah does go to Sunday School, and she’s a big hit there, too. One fellow worshipper has made it his mission to ask everyone he meets if they’ve seen the Rangers’ dancing usher. “She goes to my church,” he tells them.

The 2015 season is Hannah’s fourth in the ballpark stands. She danced from the beginning, and now her performances are a regular feature on the stadium’s Jumbotron.

Fans may not know her name, but they know the Rangers usher/dancer. And Hannah, the devoted fan, has become a favorite with the players.

“We saw (pitcher) Derek Holland signing autographs at a car dealership one day,” Charlotte said. “When he saw Hannah, he jumped up to hug her.”

“People stop us at the grocery store, restaurants,” Charlotte said. “She wears a Rangers jersey all the time and they recognize her.

“One day a man asked me if I had seen the girl with Down Syndrome who works with the Rangers. I said, yes! She’s my daughter!

“One of the wonderful things about all of this is that 40,000 people a night are seeing a happy, functioning person with Down Syndrome,” Charlotte said. “It’s a win-win—great for Hannah and great for the ball club.”

Now if only the Rangers can win the World Series, they’ll all be living the dream.