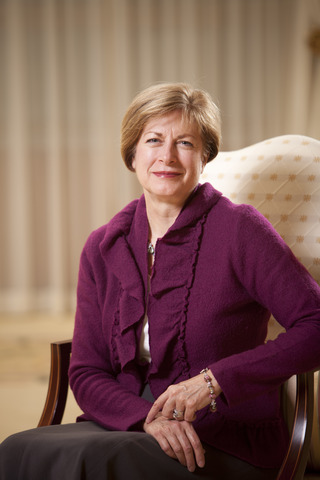 Sister Julie B. Beck was serving as first counselor in the Young Women general presidency when she was called as general president of the Relief Society in the spring of 2007, succeeding Sister Bonnie D. Parkin. Leading approximately six million women in 170 countries can seem like an insurmountable task, but Sister Beck finds strength to continue the Relief Society’s legacy of love and service by studying its history, following in the footsteps of predecessors, and relying on the Atonement.

“There have only been fifteen general Relief Society presidents in the Church,” she says. “They’ve all worked in different times, had different problems come to them, and worked with different prophets. Learning about them is learning their patterns, not the specifics of their callings.”

Sister Beck has discovered that throughout history, Relief Society presidents have been concerned about a lot of the same issues, such as helping women through life transitions or strengthening families. “They’ve all worried about families and supporting mothers because they’ve all known how influential a woman is in the home,” she says.

Figuring out how to address the varying needs of all those women can be a struggle, though. She is often asked how she addresses a specific group of women, to which she responds, “Which ones? The 18–22s? The single women over 30 who’ve never been married? The widowed? The divorced? Single mothers? You never quite hit your mark if you’re worried about a constituency. All of us are having a variety of experiences that eventually should have the same end—eternal life. Our paths are always different and we’re all unique. I don’t know of any two women who’ve had identical experiences, but I can see patterns in lives that teach me how to cope with mine.”

Despite her calling to provide guidance to all the women of the Church, she doesn’t take credit for herself. “The Lord is our advocate, and I serve Him,” she says. “He knows them; He knows their issues, their struggles, their challenges, their hurts, their heartaches, and their needs a lot better than I could. I don’t have to demand for someone to notice Heavenly Father’s daughters because I already know how He feels about them. So anything I can do to help Him to help them, I’m willing to do.”

Carrying the Burden
But “anything I can do” is a tremendous amount.

“It’s never not been overwhelming,” she says. “I don’t think I’ve slept through a single night since I’ve had this calling. I can never take my head off and put it to rest somewhere and put on my resting head. I can never take these shoulders off and put them on a shelf somewhere and put on my resting shoulders. It’s always with me, but I’ve become more comfortable with how uncomfortable it is. The Atonement covers our ineffectiveness and insufficiencies, and it’s my whole dependence on the Lord that makes it possible for me to become more comfortable with the burden.”

She continues, “The calling is lonely—it just is. Having to worry about Heavenly Father’s daughters on His behalf is given to me. There’s nowhere for me to turn except to heaven most of the time.”

In that respect, Sister Beck acknowledges she is like many women in the Church who are experiencing trials. “I feel a lot of empathy for sisters who are having difficult challenges,” she says. “In the end, it’s between them and the Lord, and no one else can solve it. And I’ve learned that’s okay.” She clarifies, “It isn’t that I don’t care or don’t notice. I’ve been out in the world and I’ve seen hard things—heartbreaking circumstances, just about every challenge, and I can wear out my life on every challenge. It’s  overwhelming and I’m not equipped. I have limited abilities. We can’t expect to be ‘fit companions of the Gods,’ like Eliza R. Snow said, if we haven’t had to do the work to become that. A lot of that is lonely work between us and the Lord and calling upon His Atonement to help us through our experience. The journey is what makes us.”

Facing Criticism
In addition to the burden she bears with her calling, Sister Beck has also endured her share of criticism, but for the most part, she doesn’t let it bother her.

“When you’re in a position like this, then you’re noticed in a way that you wouldn’t be noticed if you were at home in your kitchen, which is where I’m most comfortable,” she says with a smile. “Sometimes people like to pick things apart that general leaders say. I don’t get angry. Sometimes I feel sad—mostly for them—and I pray for them and I worry about them and their personal struggles that are causing them to feel some kind of discomfort or misalignment with how things are done. But I know if I’m right with the Lord and I’m right with his prophets and I’m loved at home and in my family, nothing else really matters.”

She adds, “I’m assigned to be here, and I speak for the Lord. I assist prophets, seers, and revelators who have specific assignments. They are the ones who set me apart for this calling, so when I speak, I speak in that way—as a general leader of the Church.”

Myths and Stereotypes
As an assigned leader on behalf of the Lord, Sister Beck has insights to help dispel the concerns that any LDS women have about their roles.

“Having It All”
Sister Beck believes one of the greatest myths that has been told to women is that they can have it all. “Nobody can have everything, and you especially can’t have it all at once,” she says. “There’s an opportunity cost to everything.”

So how can we know if our choices are correct? Sister Beck suggests asking questions like, “First, ‘Am I aligned behind the Lord’s plan for me? Is what I’m doing moving me toward eternal life or am I just enjoying my time in Babylon?’ I have to ask myself that all the time,” she says. “And then, ‘How do I feel? Is the Spirit confirming my choices?’ Balancing is best done by revelation. I’m surprised what I can get done in a day when I’m aligned.”

But she admits that, just like everyone else, she doesn’t always prioritize correctly. “Sometimes I miss opportunities to do important things, but I’ve learned to minimize guilt,” she says. “I used to be a very guilt-ridden person, but I’ve learned that the Lord uses many opportunities to teach me. I learn from experience when something didn’t feel good, so next time, I do it another way. Don’t carry it around your whole life.”

She continues, “I’ve learned that the world teaches us that we can have the dream now. They express the dream as what Adam and Eve had in the garden—you don’t have to work for anything and everything is peaceful and happy. That’s really where the adversary still is. But we chose to have a mortal experience to prepare for the real dream, and that dream is eternal life. Eve was willing to go through a long, hard mortal experience in order to work toward the promise of the dream—I don’t think most women realize that. They’re trying to make it be the dream now. We don’t get that here. What we get here is the experience.”

Fitting In
Sister Beck often hears women in the Church express concern that they don’t fit in with the other sisters. But she believes those feelings of isolation are often self-inflicted. “We tend to put the labels on ourselves,” she says. “The Church doesn’t, and loving leaders definitely don’t—we’re just focused on our own experience.”

In fact, “worldwide, the majority of women in Relief Society are under the age of 30,” she explains. “About half of all women are single, and many of the rest will probably be single at some point for one reason or another. Relief Society is for everybody. Relief Society is a society that is distinct and separate for women who’ve made covenants and are helping each other keep them. That’s what makes it possible for our daughter to move 14 times in 13 years and belong everywhere she goes. It makes it possible for my niece to live in 7 countries in 10 years and fit in.”

From her travels around the world, Sister Beck has learned that even though women put labels on themselves, such as single or divorced, employed or homemaker, LDS women everywhere have a true desire to be happy. “Sisters usually want to please the Lord,” she says. “They’d like to have things more perfect than they are. I’ve also learned that life is pretty hard for most women around the world—from the lady on the farm in Africa living with the dirt floor and in a stick house to the woman in Hong Kong living in a high rise penthouse apartment, there’s not a lot that separates them heart to heart. Life is still hard in many ways for the sister in the penthouse.”

Not only do LDS women struggle to fit in with each other, they also struggle to fit in with the rest of the world. To address this concern, Sister Beck quickly flips to page 95 in her well-worn copy of Daughters in My Kingdom: The History and Work of Relief Society [see page 58 of this issue] and shares the following quote from President Spencer W. Kimball:

“We’re not strange,” Sister Beck assures. “We’re distinct, we have stature, and we are different in happy ways.”