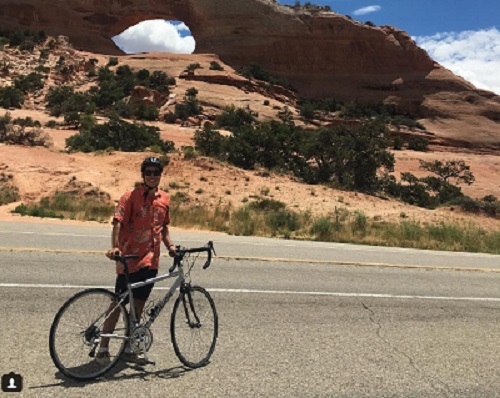 To go to the temple, Latter-day Saints have been known to travel any distance.

And BYU student Dalin Earls is no different, except he prefers to visit temples by bike.

Earls began his "Utah Pedal Pilgrimage" as a way to visit 17 temples in Utah, a goal he's had for most of the four years he's lived in Utah, according to his blog.

And so with a bike he borrowed from his friend, Earls began his journey July 13 at the Utah-Idaho border. On his first day, Earls visited the Logan, Brigham City, and Ogden Utah Temples, biking just over 86 miles.

And that was just the beginning.

Battling 100-degree heat, narrow or non-existent bike lanes, rain storms, and exhaustion, Earls cranked up more than 100 miles in a day at times, even biking 144 miles in one day to reach the Vernal Utah Temple.

But with family members and friends driving along his route at times to provide water and food and meeting him at temples and campgrounds, Earls was able to keep going.

3 days, 2 states, and 1 more temple down. The Monticello temple was apparently the place to be tonight for like the entire population of Monticello. #UtahPedalPilgrimage

Though his mother—who was following Earls while he biked a 12-mile stretch of I-70 in Colorado to avoid a very sandy, muddy, Kokopelli trail—was pulled over for driving on the shoulder of the road to keep him safe, Earls' pilgrimage was without incident.

And when Earls reached the Saint George Utah Temple on July 28, he didn't stop there. Earls biked past the temple to the Utah-Arizona border, biking a total of 1,173 miles and completing his pilgrimage.

“All those feelings of who I am, who I want to become, my relationships with others, it was a cool moment," Earls said in an interview with the Daily Herald. "I felt like God heard my prayers and said, ‘I accept your ridiculous biking amount.’ It was a cool feeling of closure there in the temple."

At the end of his journey, Earls helped pack up his mother's SUV and headed back to Provo, Utah, having biked more than a thousand miles and completed several temple ordinances.