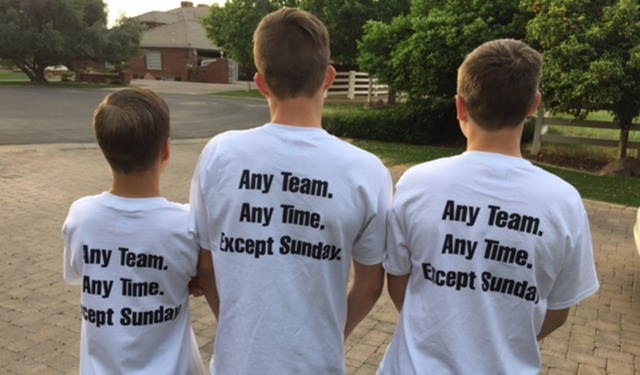 Any family who has signed up for competitive sports knows that avoiding Sunday games can be a challenge. Many competitive club soccer teams, for example, play up to 10 tournaments a year—and tournaments usually include Sunday matches, which is why Jeff Erickson created the No Sunday Fútball Club in Gilbert, Arizona.

Erickson’s sons have played competitive club soccer for 12 years and have been pressured multiple times to play on Sundays. For many competitive teams, coaches want to know if the players will play on Sundays before they’re accepted to the team.

“Each year, we would let the coaches know of our commitment to non-Sunday play and most of them respected and honored our children’s wishes. I was always grateful to my sons for their desire not to play on Sundays and for the coaches who respected their values,” Erickson said. However, “[as] my children grew older and played at a more competitive level, it became more difficult to make the best teams. It was possible [for coaches] to find other players that were equally qualified but would play on Sunday.”

Erickson wanted to create an opportunity for great players who didn’t want to play on Sunday to play on great competitive teams. He said, “I never believed that to be a good soccer player you had to play on the Sabbath.”

After discussing the possibility of a non-Sunday soccer club with other soccer parents, Erickson kept the possibility in the back of his mind. Without the funds and proper planning, however, Erickson didn’t feel prepared to start a new competitive soccer league.

When his bishop challenged his ward to watch general conference with a question in 2015, Erickson asked what he should do next in his life.

“The answer was to act on these thoughts and promptings I had for several years and actually start the non-Sunday soccer club. The impression was powerful, and it’s what I knew I should do, but I really had no experience, expertise, or direction—only the idea and a powerful impression.”

After involving more parents who loved soccer but also loved competition-free Sundays, Erickson planned, made goals, and worked to create a league and find available soccer fields before the May 2016 competitive tryouts.

“Through numerous blessings—and seeing the hand of God in a variety of ways—some repossessed land was found and purchased. We worked with wonderful county leaders in Maricopa County, and we were able to get the project going in an expedited manner,” Erickson said. “When a handful of good people get together with a noble and great cause, . . . great things can be accomplished.”

Groundbreaking for the No Sunday Fútball Club soccer complex. Courtesy of Jeff Erickson.

After securing land for their newly completed soccer complex, which now consists of 5 fields and parking for 300 people, the club officially began operation in January 2016, just in time for competitive tryouts. Over 600 kids showed up to try out for the new No Sunday Fútball Club (NSFC).

“We are the only club in Arizona who will not play on Sundays,” Erickson says of the Gilbert-based club. “We never practice on Mondays to preserve family nights, and . . . [we] schedule around mutual so [players] are able to attend their youth night each week.”

While the club is based on LDS values, Erickson explains that it’s not exclusively LDS families that participate, saying, “We have been supported by other clubs, critical donors, people of the LDS faith, people of other Christian faiths, and many other key leaders and coaches who are not of our faith. We have found that many people have come to our club so their family can enjoy the Sabbath and enhance their family time.”

“The club in its first season has about 400 players and 30 coaches and over 30 teams,” Erickson continues. “We are excited about the future and the opportunity to show Arizona that you don’t have to compromise the Sabbath or family values to be a great soccer player.”