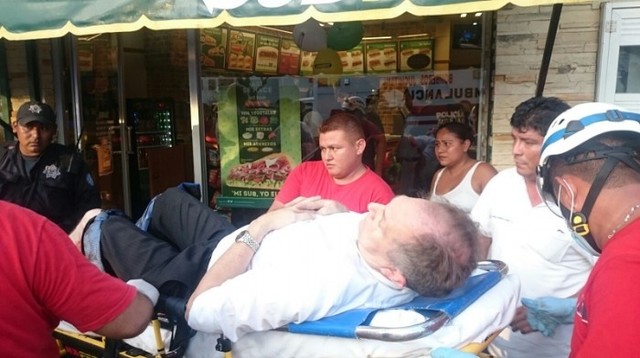 Mission President from Orem Shot While Serving in Mexico

Mission president of the Mexico Oaxaca Mission, Lynn R. Madsen, was shot in the calves Monday during an armed robbery at a Subway restaurant in Juchitan de Zaragoza.

Two teenagers drove into the restaurant parking lot on a motorcycle shortly before 6 p.m. One took out a pistol and began robbing customers and employees. When someone resisted the robbers, they fired a shot that struck Madsen in both calves. He was with three missionaries at the time and no one else was injured.

"President Madsen sustained injuries to both legs from a single gunshot," Church spokesman Eric Hawkins said. "Fortunately, his wounds are not serious in nature. He is receiving medical treatment and is expected to make a full recovery."

He is being treated at a local hospital.

Lynn Madsen and his wife, Diane, lived in Orem, Utah, before beginning their mission service in 2014. They have four children. One of their daughters recently posted on Facebook about her father's recovery:

Family and friends: My dad was shot last night in the calves during a robbery. The bullet went through both calves, leaving 4 bullet holes. I talked to him today, and he is doing just fine. He will be at the hospital for observation for a few more days. I don't know all the details, but I'm sure he'll make a full recovery, just not without some pain. We know the Lord is watching over him right now, and we are all very thankful that this incident wasn't worse. Thanks in advance for all your prayers.