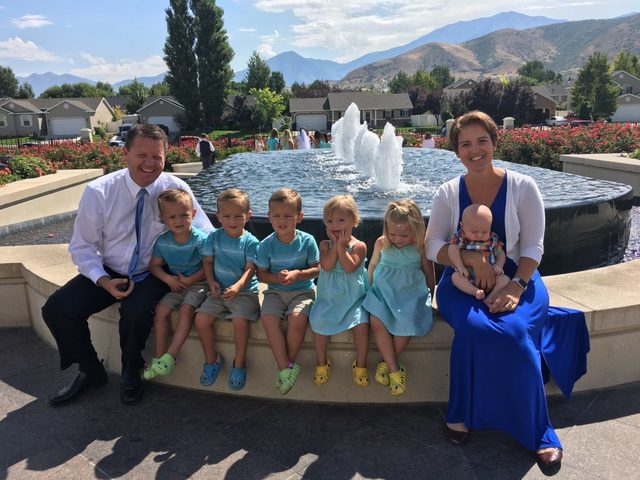 The Mormon Women Project recently published a podcast with Julie Bradshaw Grygla. Julie didn't always want to be a mother, but now she has six kids all under the age of five. When Julie's triplet boys were just five months old, she found out she was pregnant with twins. Just four months after her twins were born, God told her she'd be having one more. Julie shares what it's like, how she got here, and how she relies on God and the Spirit to get through this crazy adventure. You can listen to the podcast here or read the whole story here. We've included a sneak peek below. When I was 15 weeks pregnant with the triplets, my husband woke me up in the middle of the night and said, “I thought you were having a bad dream—you were yelling, ‘No! No! No!’” I started laughing, and I said, “David, I was dreaming that we had just found out we were pregnant with twin girls and the boys were 15 months old.” And he goes, “Honey, that is not a dream, that is a nightmare.”

After the triplets were born we thought, “Well, we’d like to have one more.” It had taken us 18 months with fertility to get pregnant with the boys, so we thought we’d just let what happened happen, and if nothing happened in a year we’d look into fertility again. I really didn’t want to do fertility because I didn’t think I could handle another set of multiples.

So when I had this wave of nausea, I thought, “Noooo. There is no way.” And then that night, Dave said, “Honey, you are glowing today!” and I’m like, “That’s it! I’m taking a test!” I went in and took the pregnancy test. I totally expected it to be negative—do you know how many negative pregnancy tests I had taken? I looked down and it said “Pregnant.” And then I started doing the math and I’m like, “Twin girls…”

I walked out and I handed the test to Dave. After I convinced him it wasn’t a joke, he just looked at me and said, “It’s gonna be twin girls, isn’t it?” and I said, “Yep.” So we just sort of braced ourselves for it. We did the ultrasound, and they were like, “It’s twins!” We said, “We know.” Then they did the gender scan, “It’s girls!” “We know.”

Images from The Mormon Women Project